When I compared Studio and Mina as an alternative, I took into account the most important factors to me: smaller footprint (important WAF), water tank operation (a must, I use bottled water) and 48% price of Mina as a benefit in favour of Studio. The „only" disadvange is the lack flow or pressure profilling (quoted from Dalla Corte Studio (a year later)):

guydebord wrote:That's a great review, many thanks! I have always been attracted by Dalla Corte machines and this one seems to be a great addition to their offers. If this had flow/pressure profiling options it would perhaps be my perfect machine.

Bluenoser wrote:... I especially like the brew water stability that I think the saturated group would offer. And I think the flow control is something most machines need these days when one spends over $8k (cdn) on a machine! ...

But as has been said in review Resume, proven grouphead technology makes a good starting point for further upgrades and being an electronic engineer with mechanical designing skills (a hobby), I've took the challenge...

If the needle valve flow control works for Lelit Bianca or ECM, why not for Studio? But I prefer stable repetability over manual tweaking, so the idea was to add solenoids electronically controlled 2 needle valves after the pump, which would allow to pre-set 2 various flows plus a maximal factory default one, and to program any combination of them. Quite simple, but there is really not enough free space in Studio tu put extra valves and electronic inside ... so another challenge raised.
In the first version with cheaper pneumatic needle valves finished in June 2019 I tested, whether the idea works and if I can put all necessary components inside the machine and how to do so ... and it worked very well!

Looking at the „extra room" in the water tank compartment I decided to make „fake" zinc galvanised rear steel panel, mount all electronics on it and put it inside the compartment - only there was some free and unused space left. However, original Gicar non-contact safety water lever sensor (a huge one) had to be removed from the compartment and could not be used back ... so another problem to deal with. 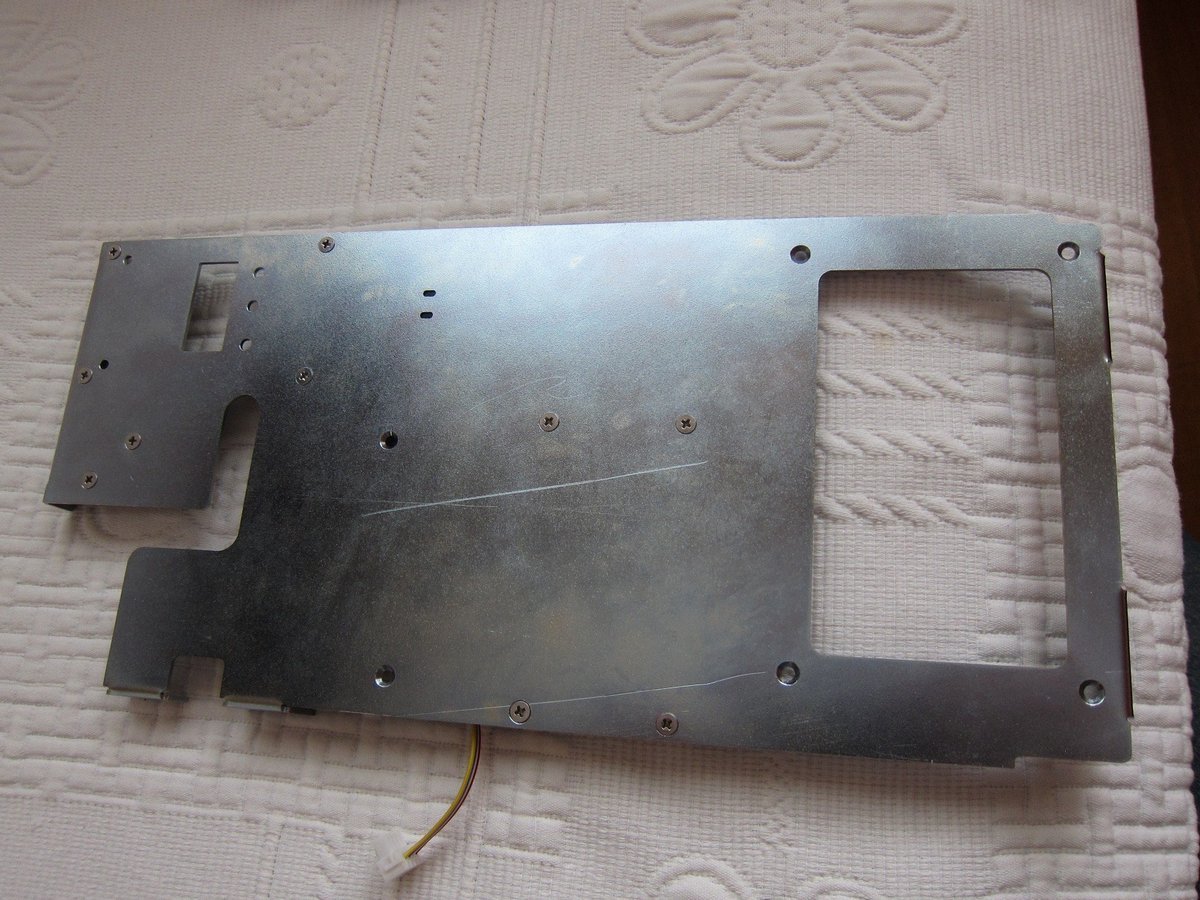 I used 2 much smaller capacitive sensors instead of the original huge one - one serves as original low level safety water sensor while the other is for low water refill warning (before the first one stops the heating and pump). Both are integrated into fake rear panel. Of course it was necessary to check the signal compatibility and use the same connector type like original one to connect it to the Studio main board. 2nd sensor output is „transformed" into red or green (or blue, jumper switcheable) LED signaling light integrated in the top of fake rear panel (green (or blue) = enough water, red = refill is required). 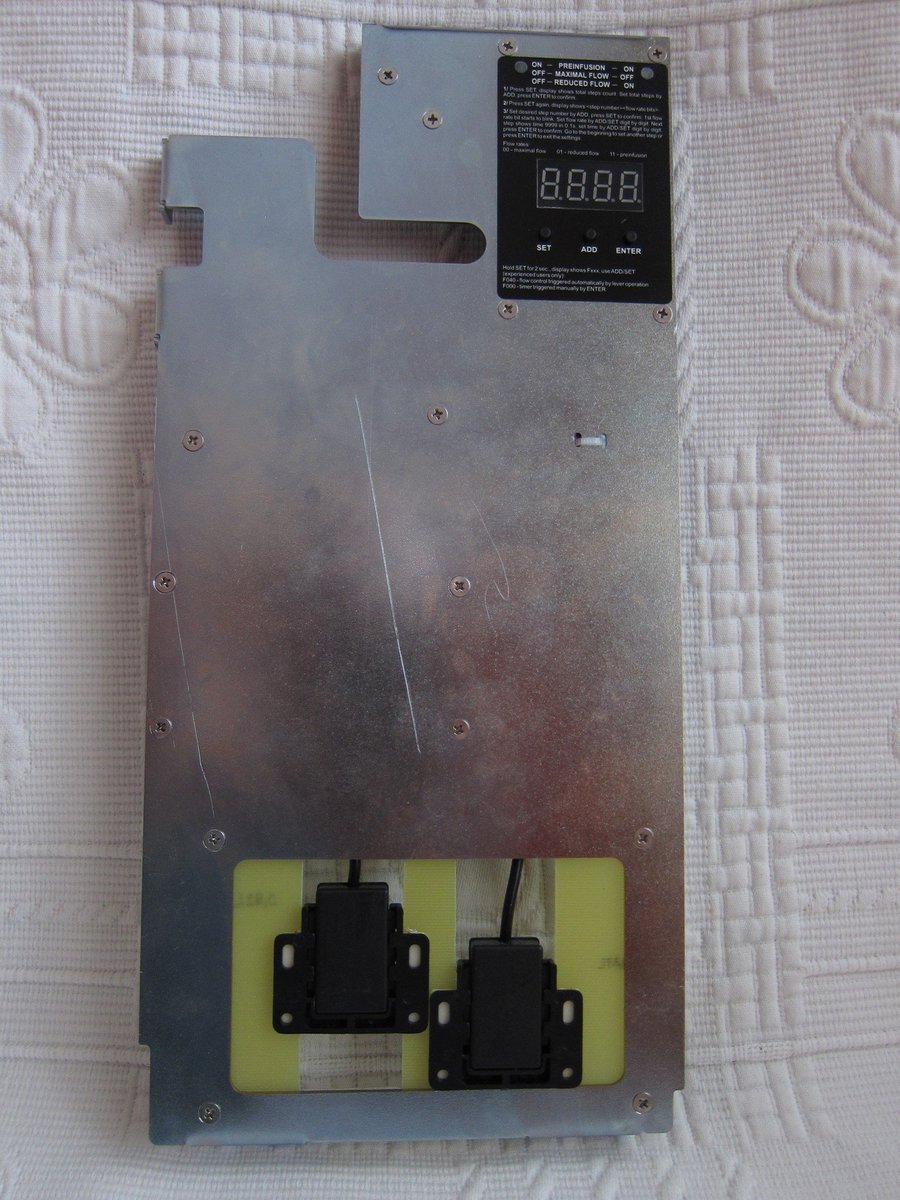 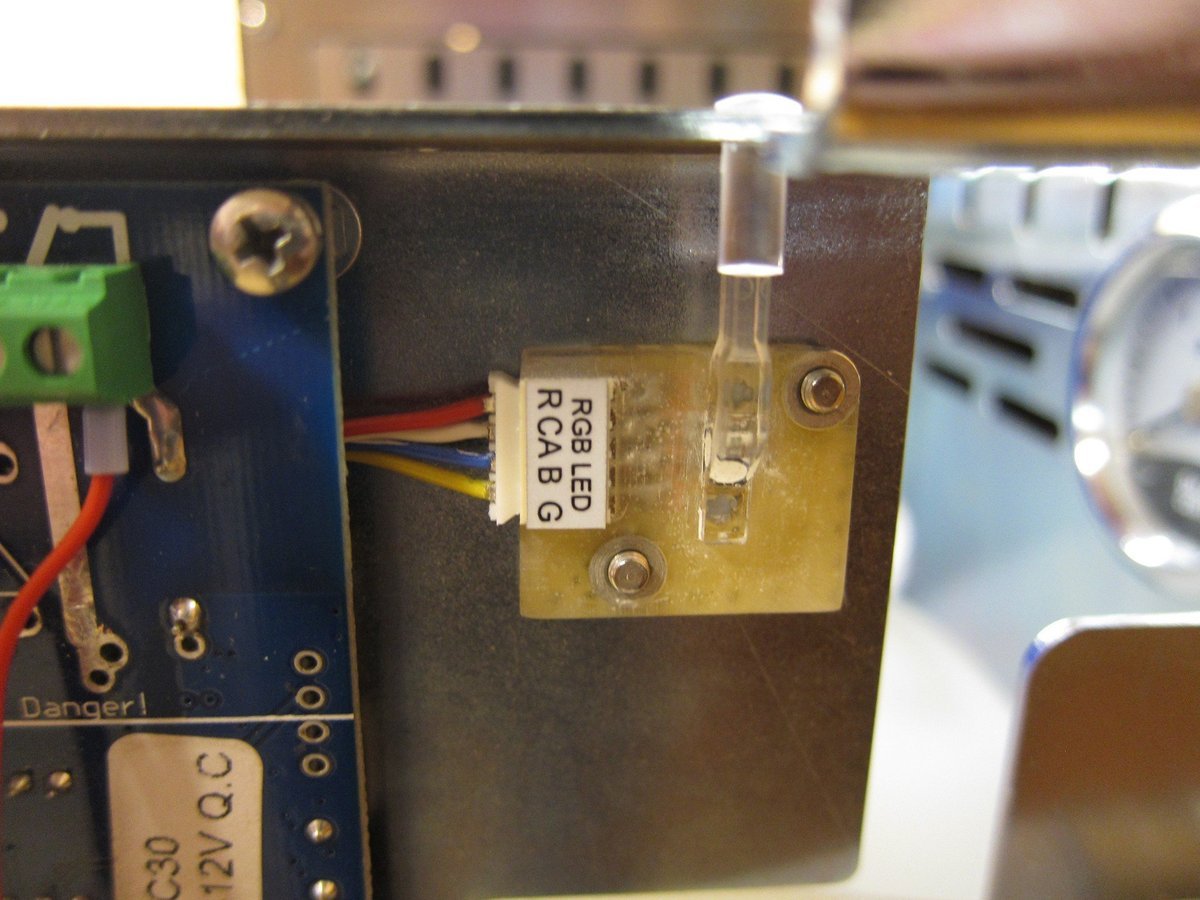 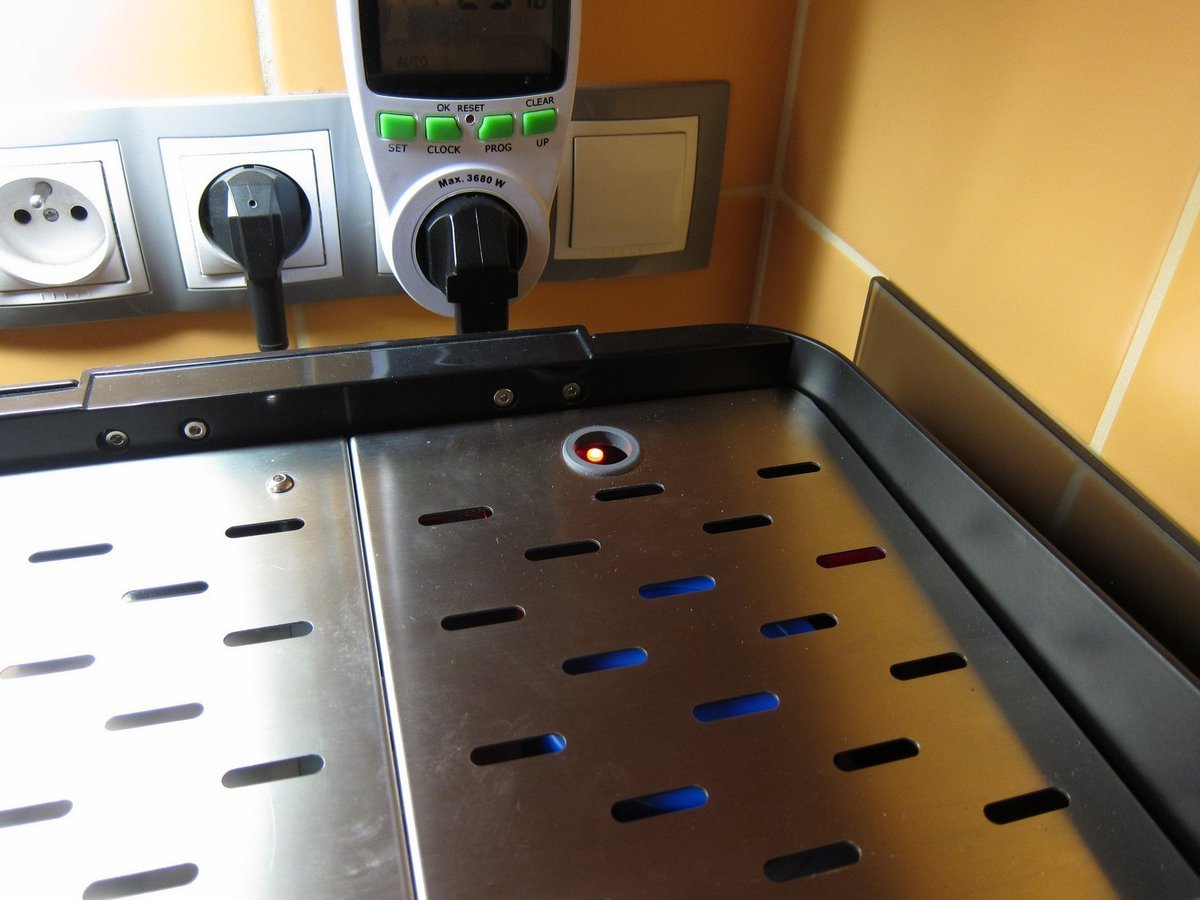 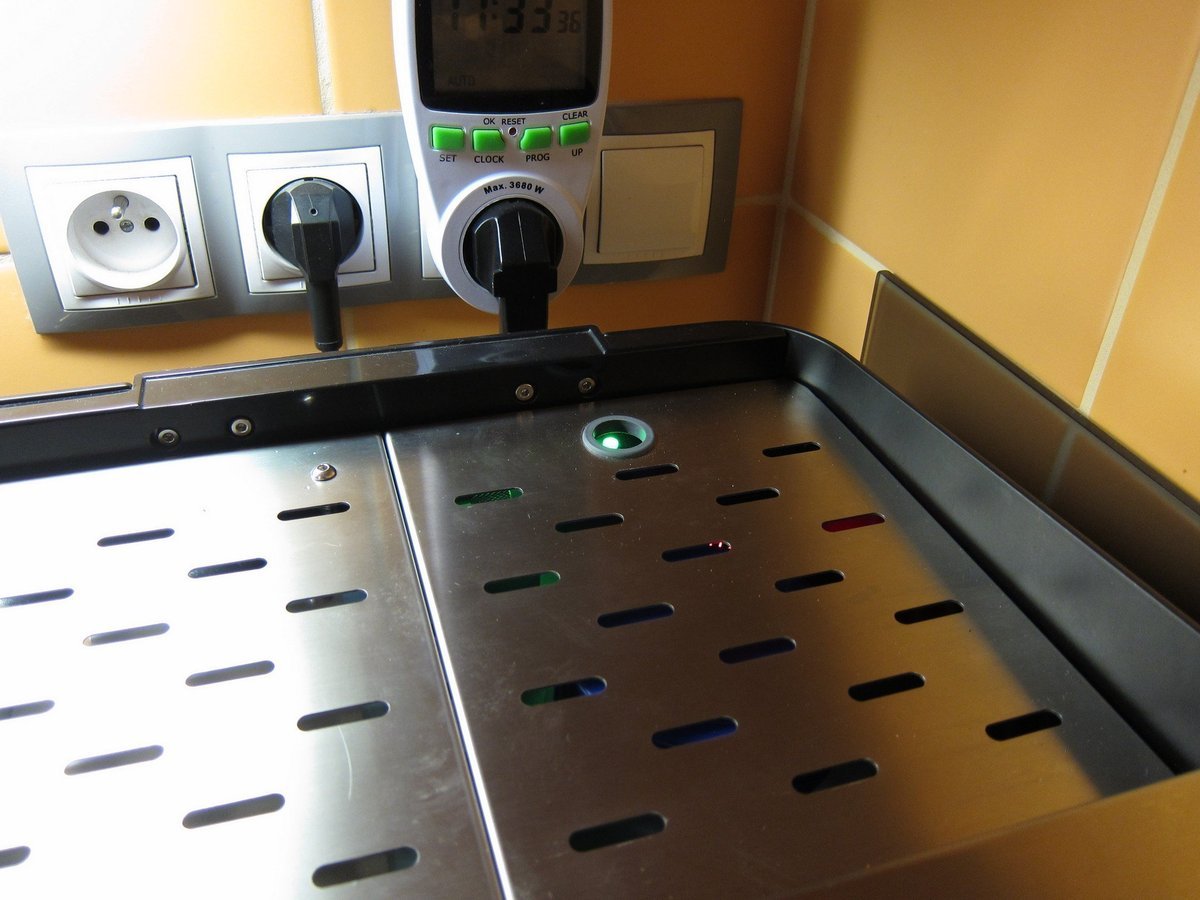 It made no sense to develop, design and produce own PCB for power and controll/timer electronics just for one Studio modification, although I could to do so. I used universal PCB and soldered all power electronics on it, applied Electrolube conformal coating to the copper side for protection, and bought programmable 2-channel timer off eBay as the easiest way. The timer was modified for the intended purpose. Both modules are mounted on the fake rear panel together with Mean-well 12V power supply for the electronics. Silicone wires are used for signal and mains wiring inside the machine. 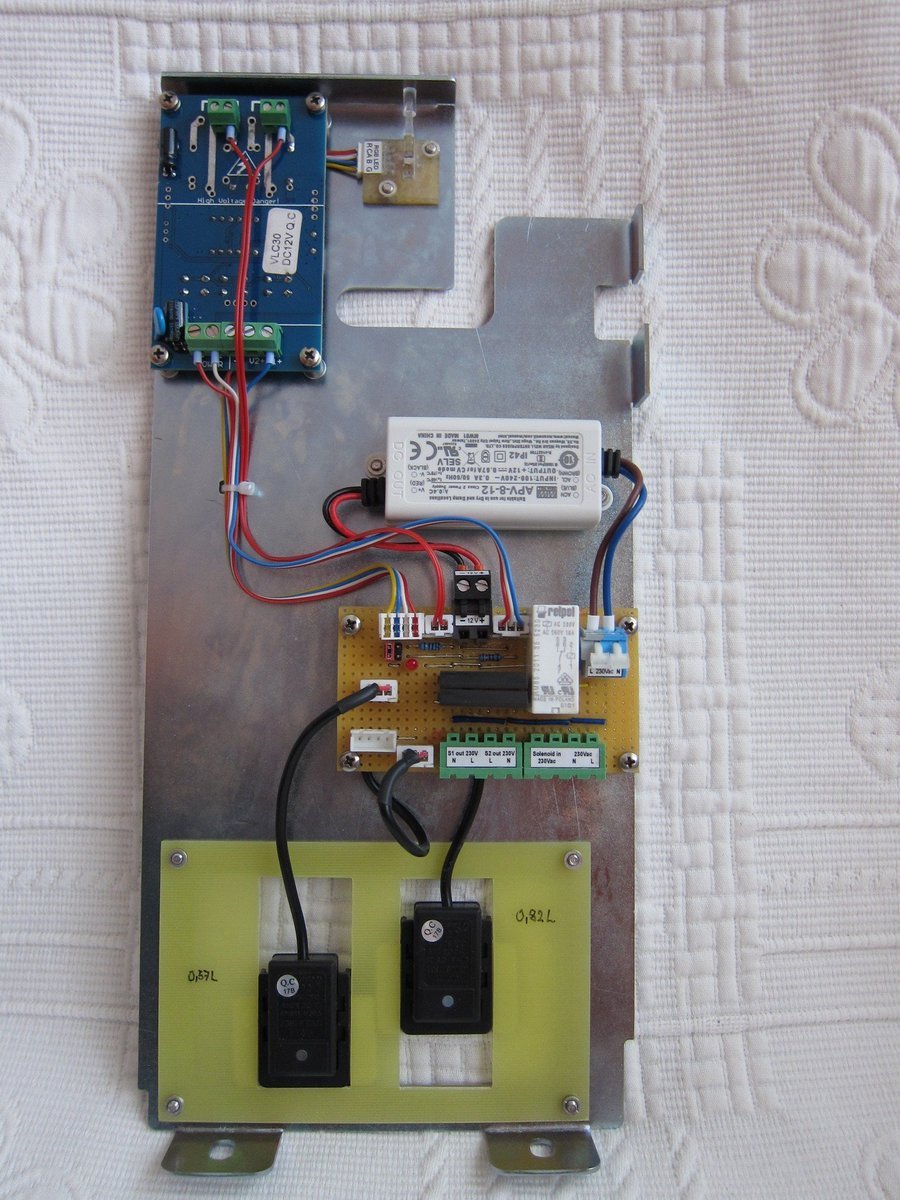 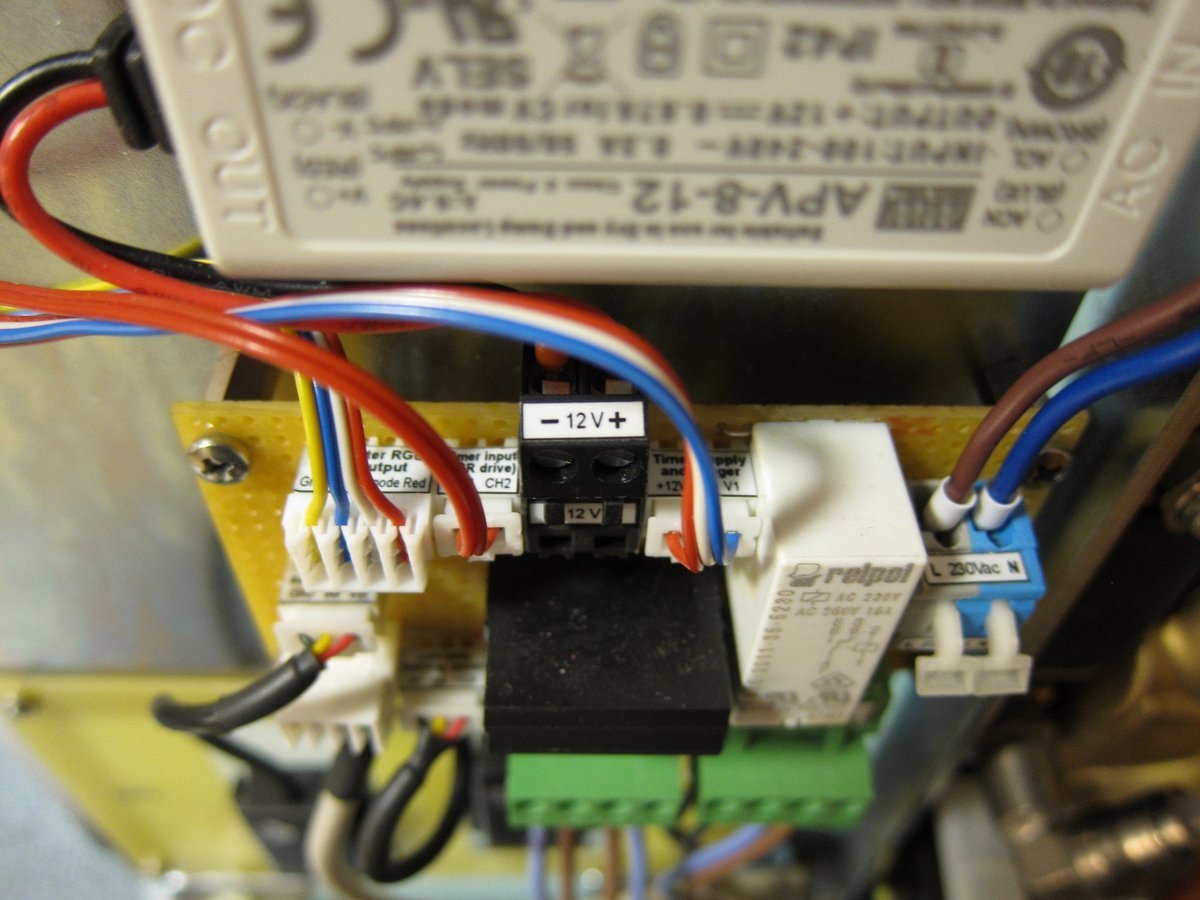 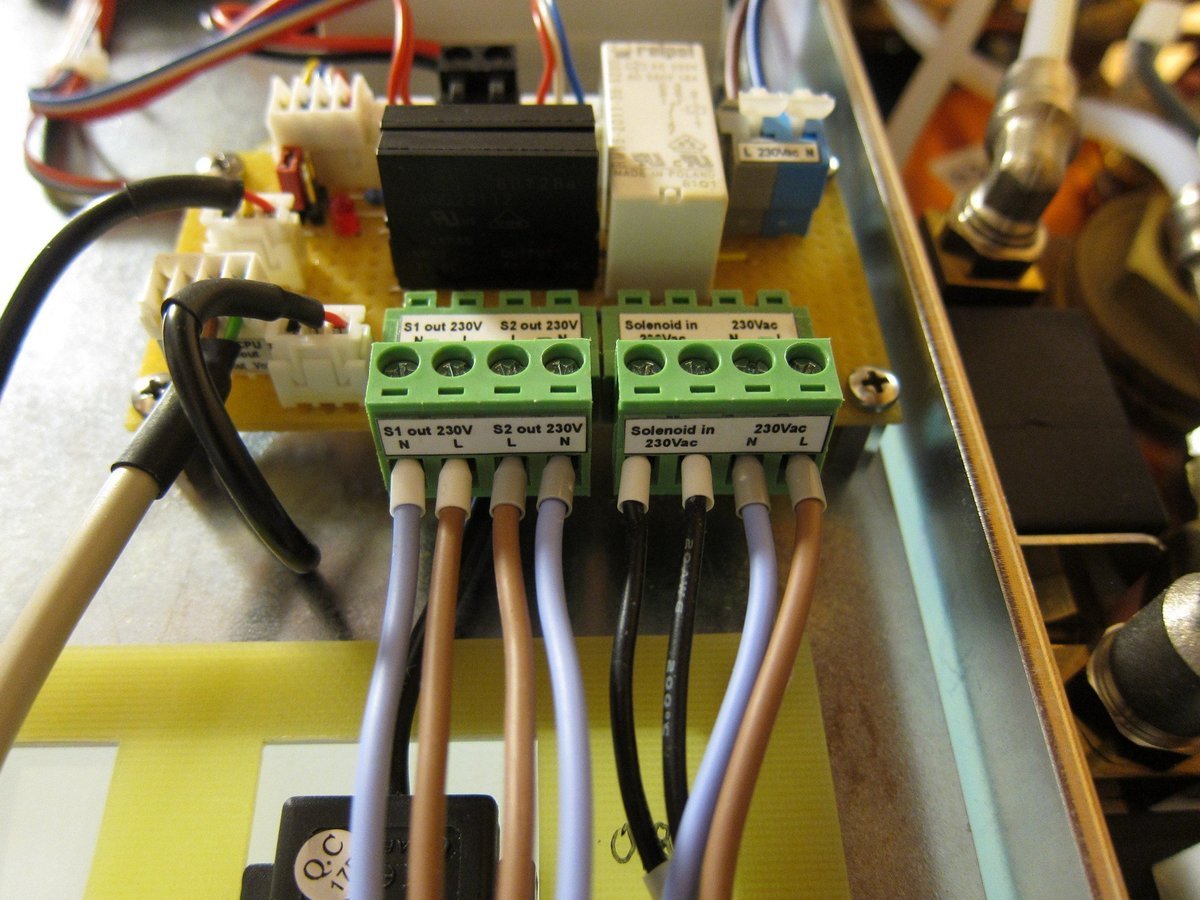 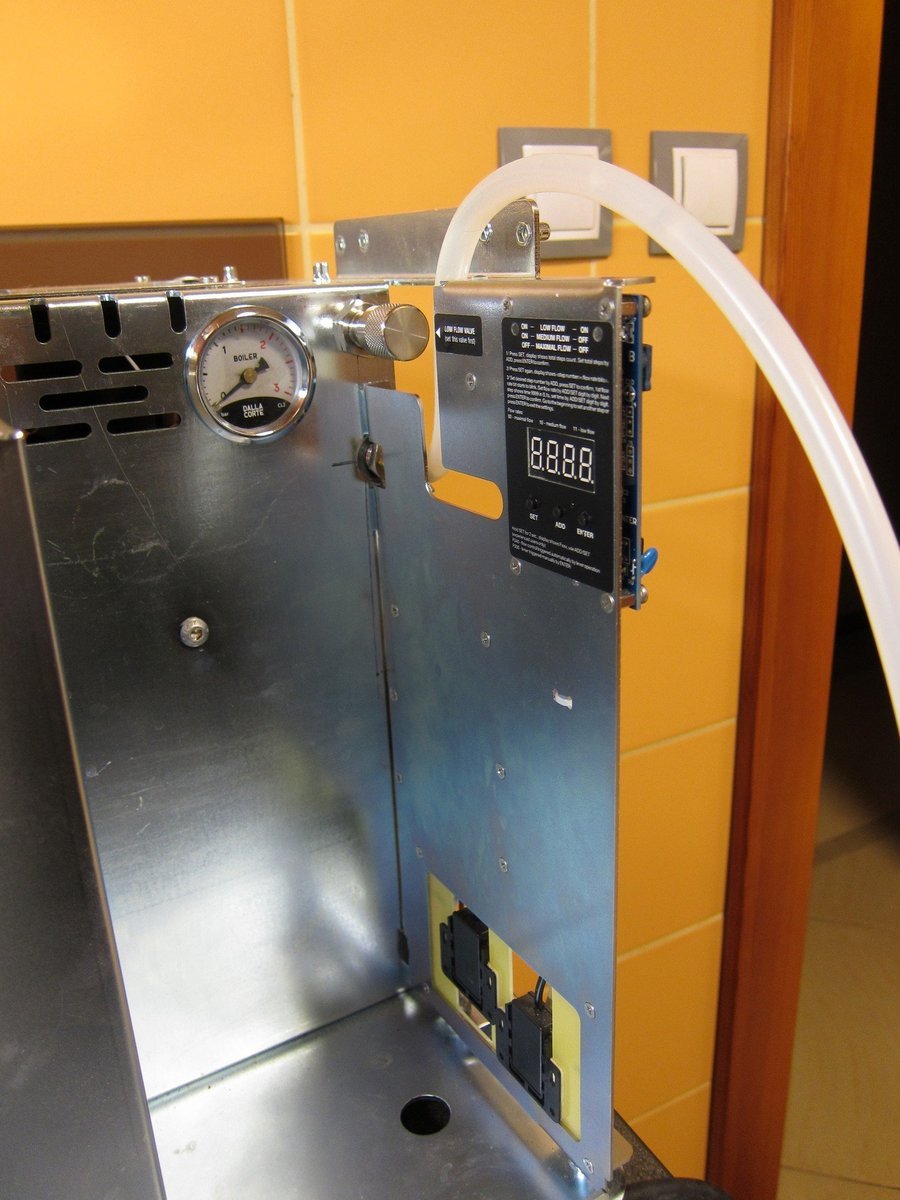 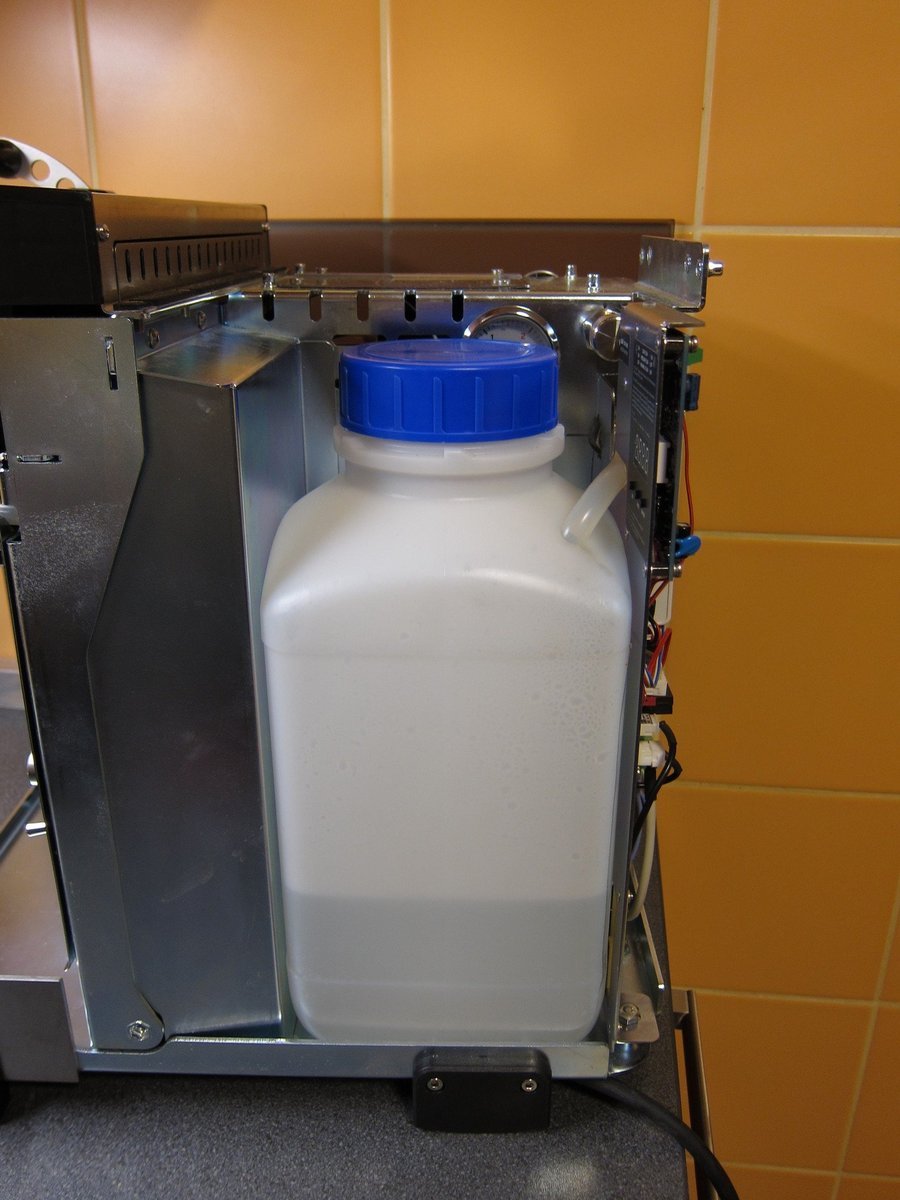 To keep the tubing as short as possible, needle valves and solenoids should be placed somewhere around the pump and steam boiler. But at first I had to swap steam pressure gauge and brew boiler gauge (from water compartment to the front panel) to make some space, and also because of logical gauges arrangement for further profilling. 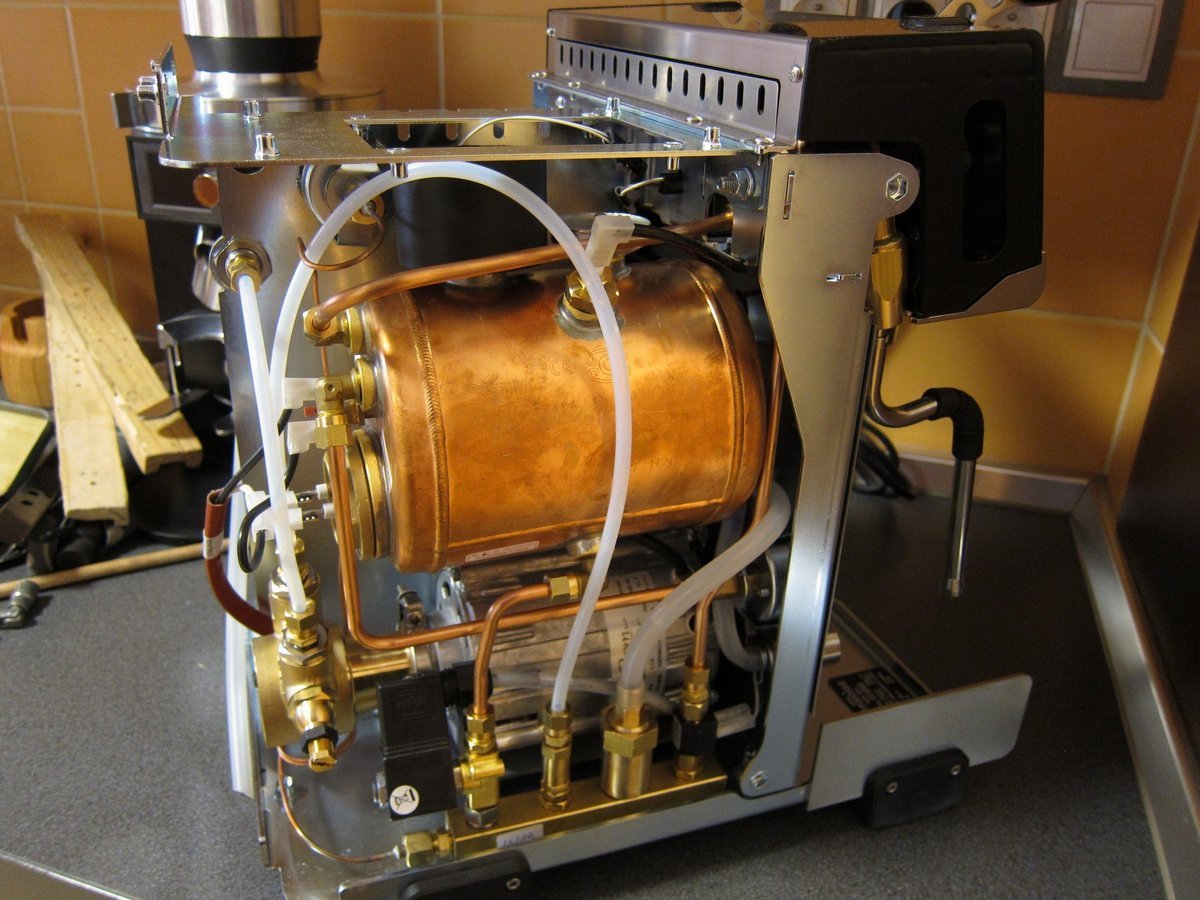 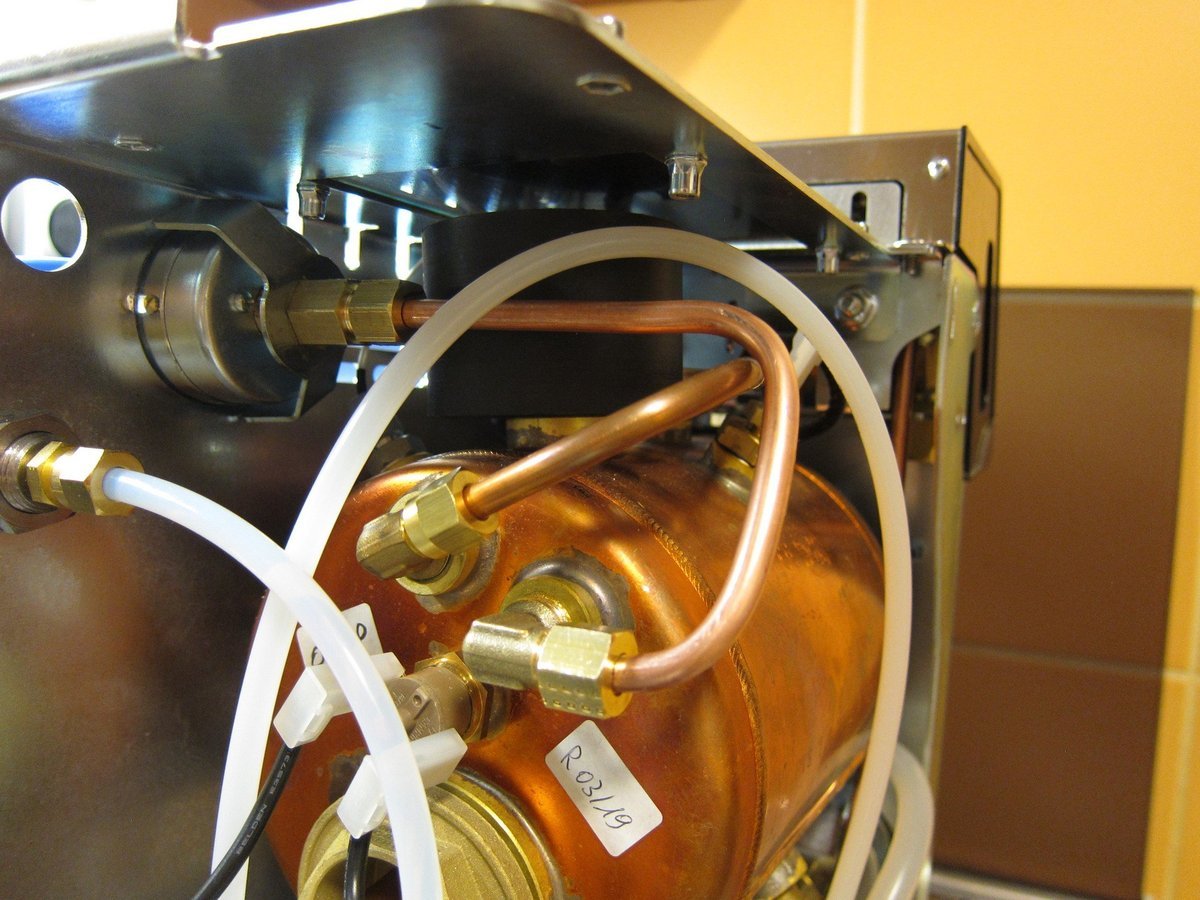 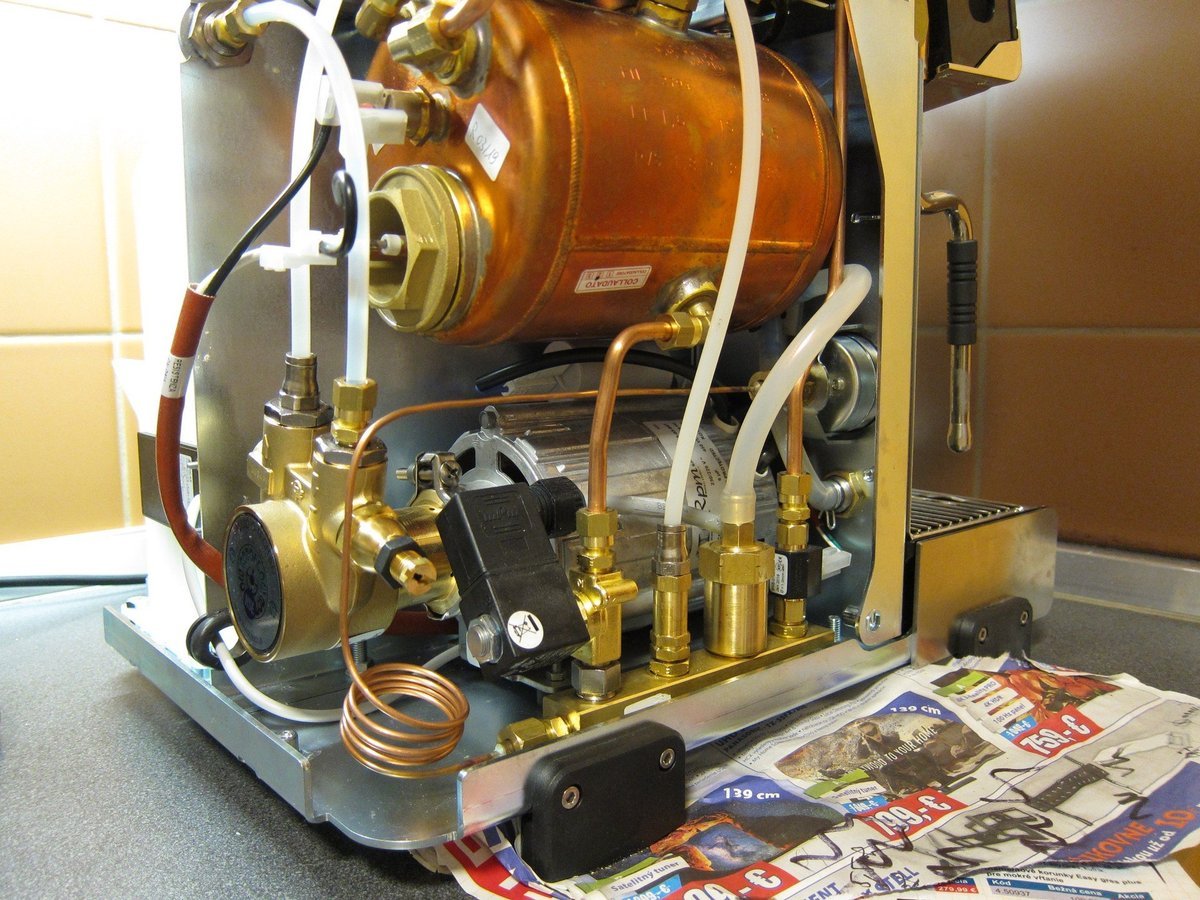 For final version I choosed stainless steel needle valves, but these were quite sensitive to adjustment, so some modification of the orifice was necessary. Only high quality components were used for hydraulics, Parker Legris brass and push-in fittings and PTFE tubings. Needle valves are mounted so they are easily accessible for adjustment, low flow valve (usually for PI) is in the water compartment under right cup tray while medium flow valve is in the opposite side under left cup tray. To remove left cup tray original M4 screws were replaced with fake ones, which allows to lift left cup tray without screws removal in the same way like the right one. 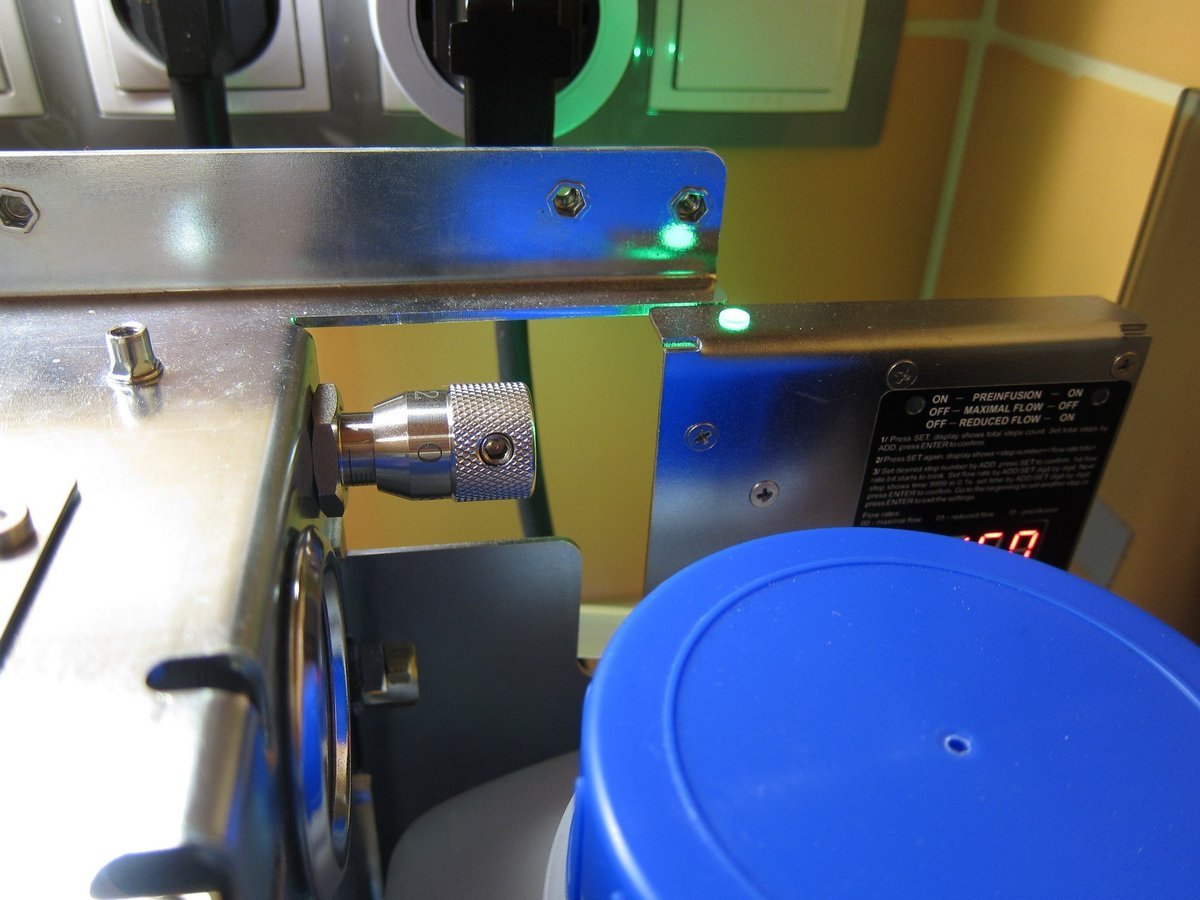 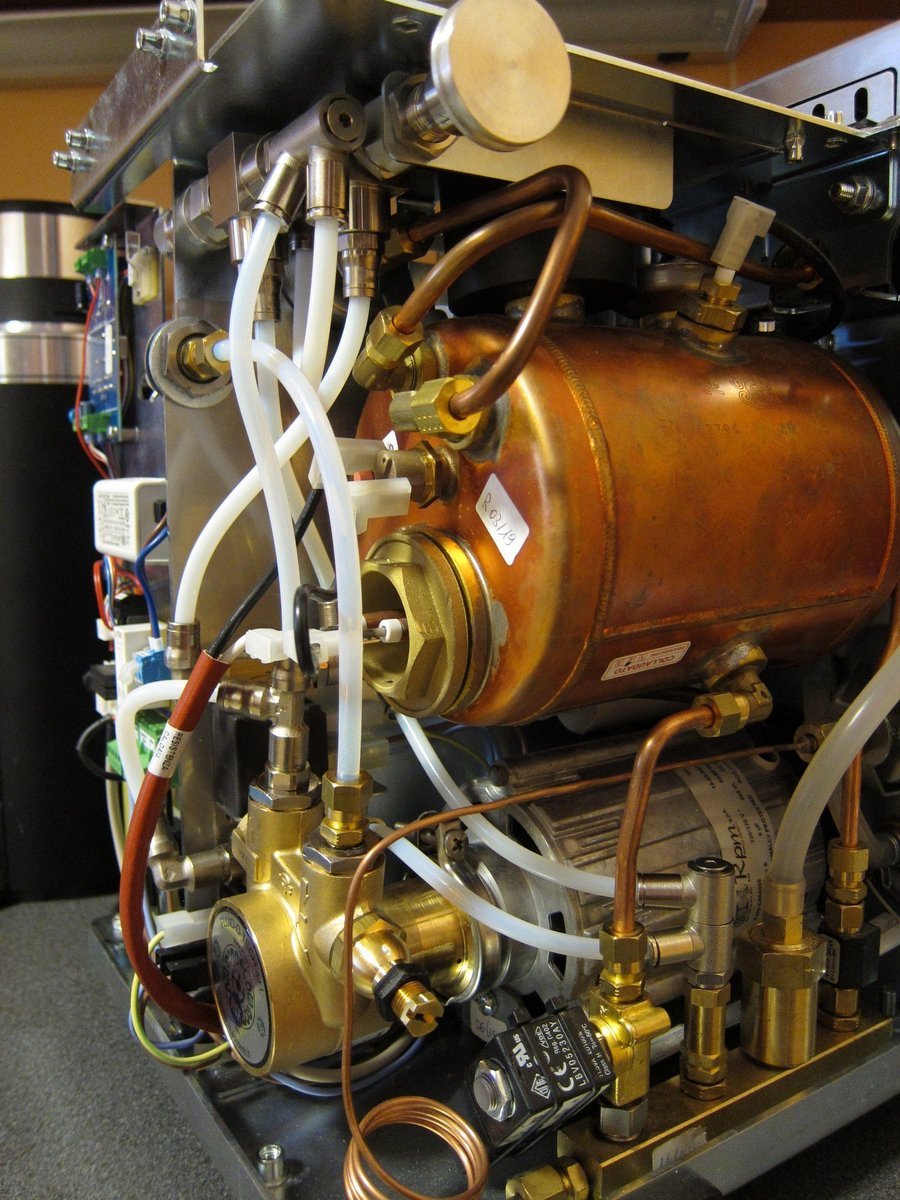 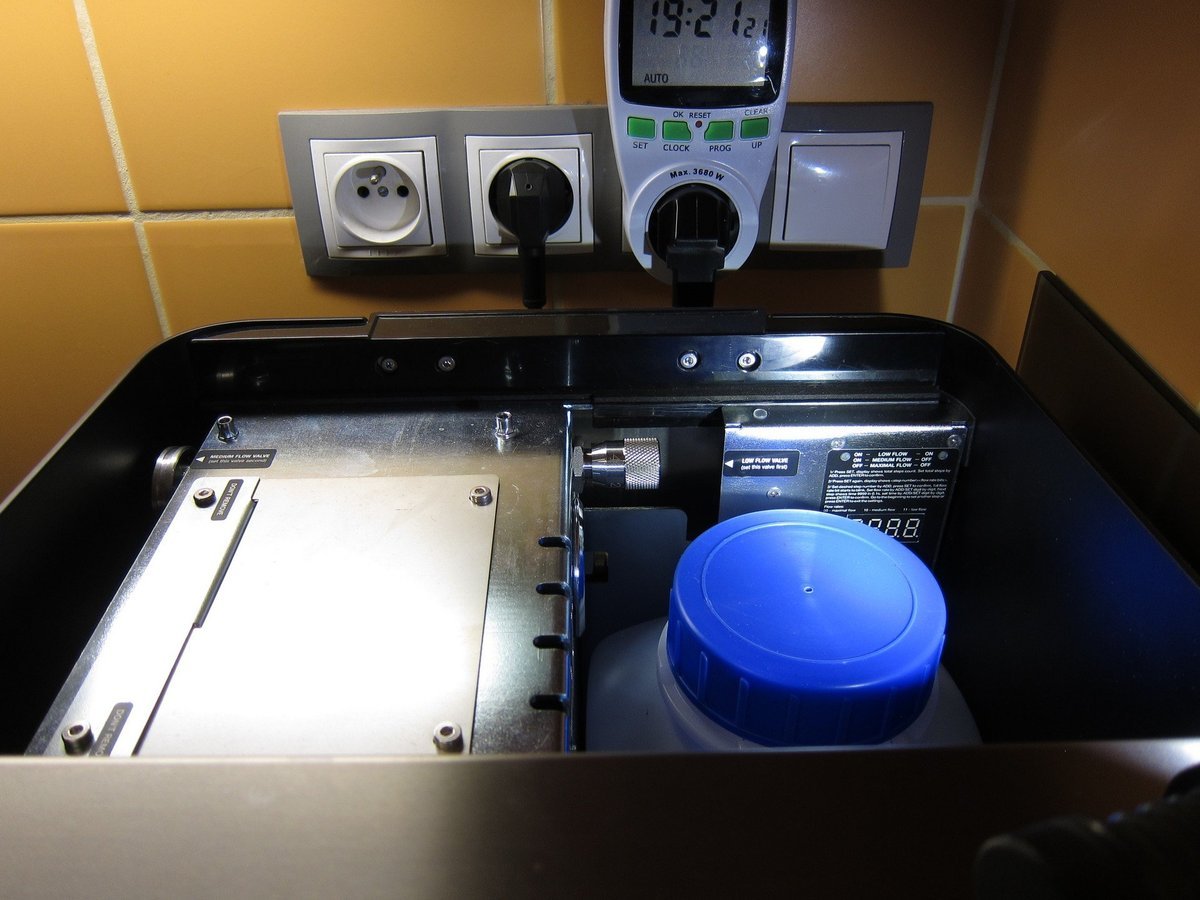 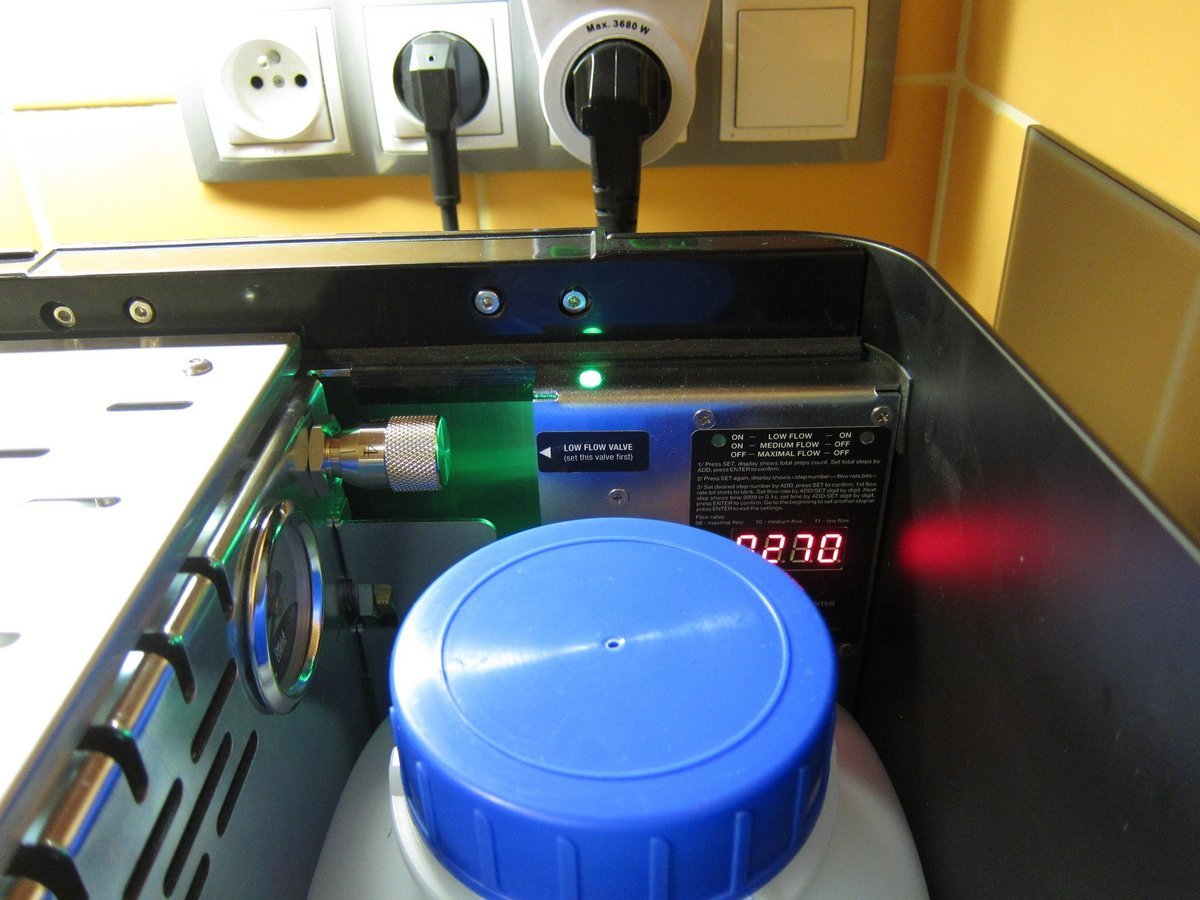 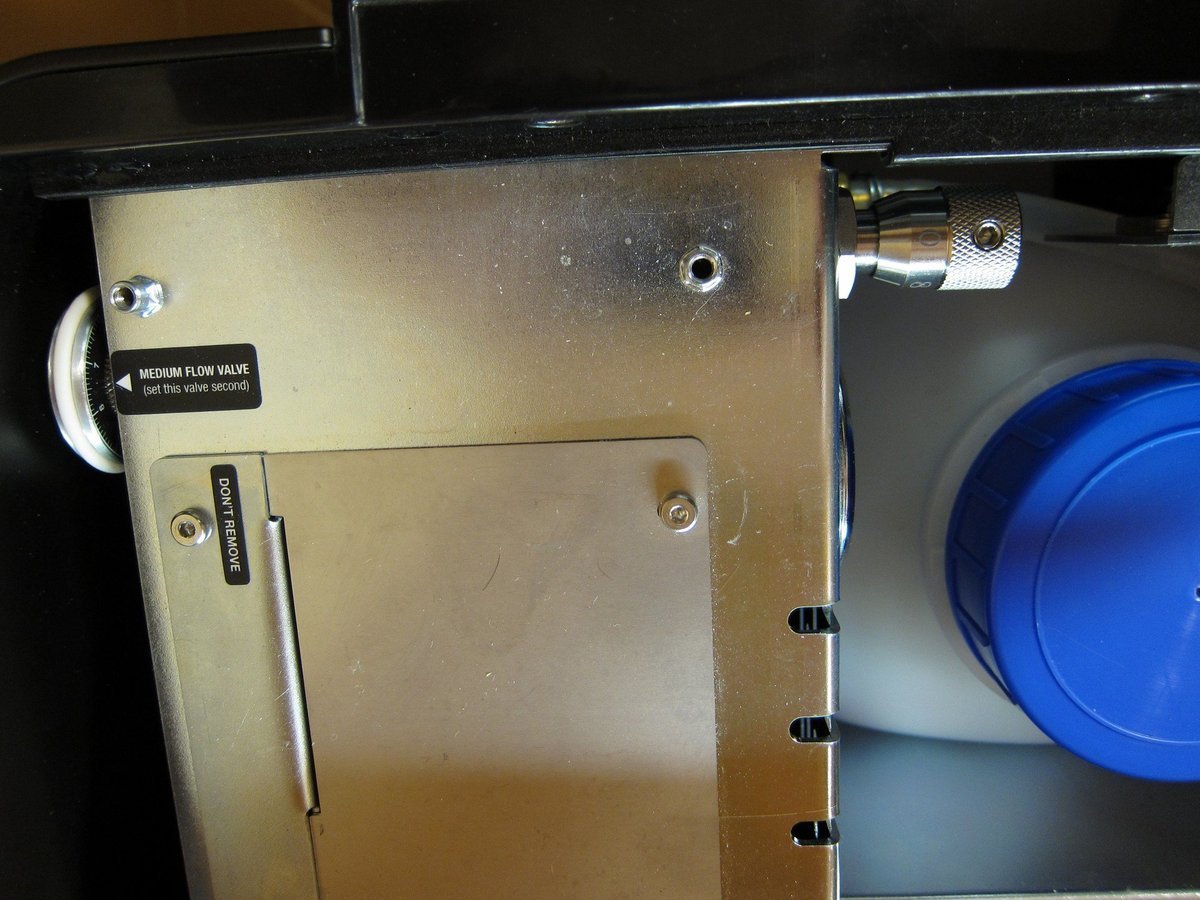 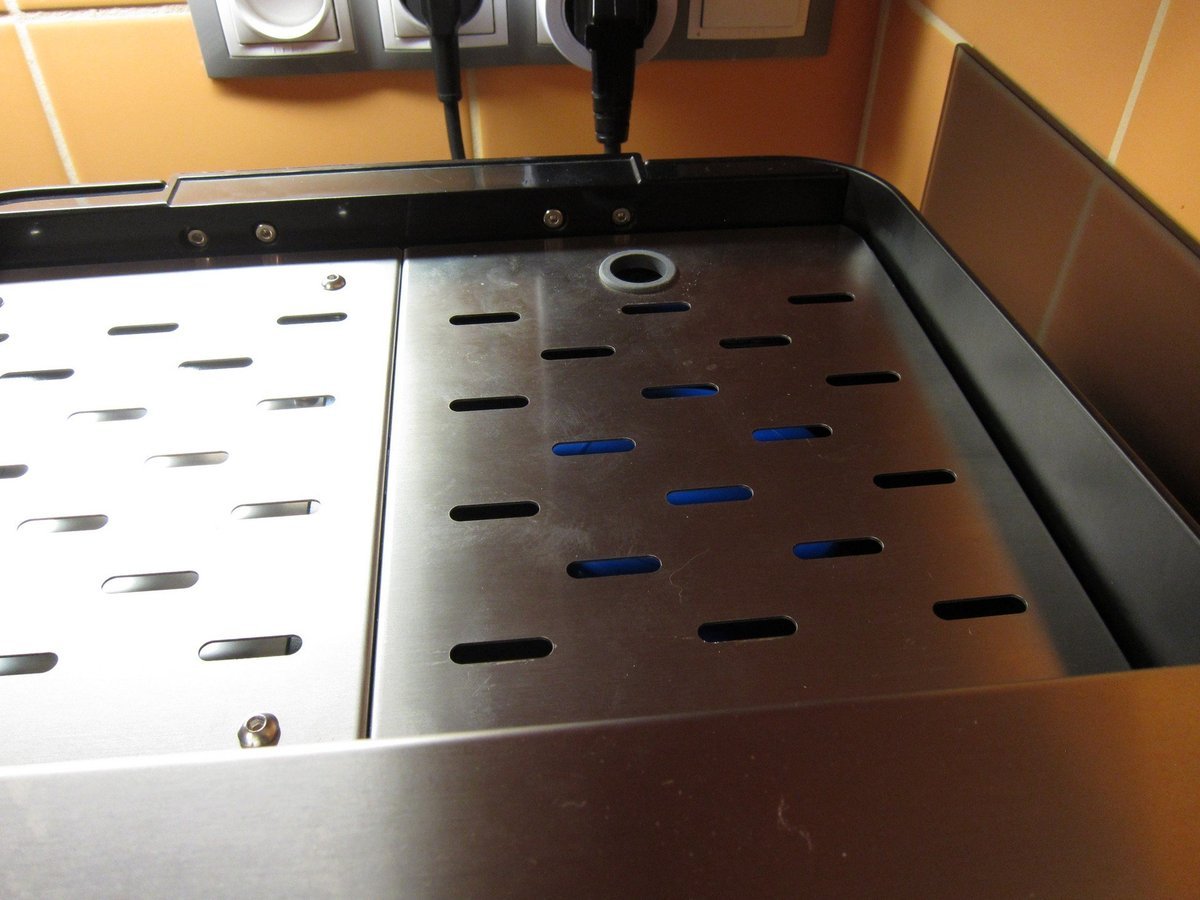 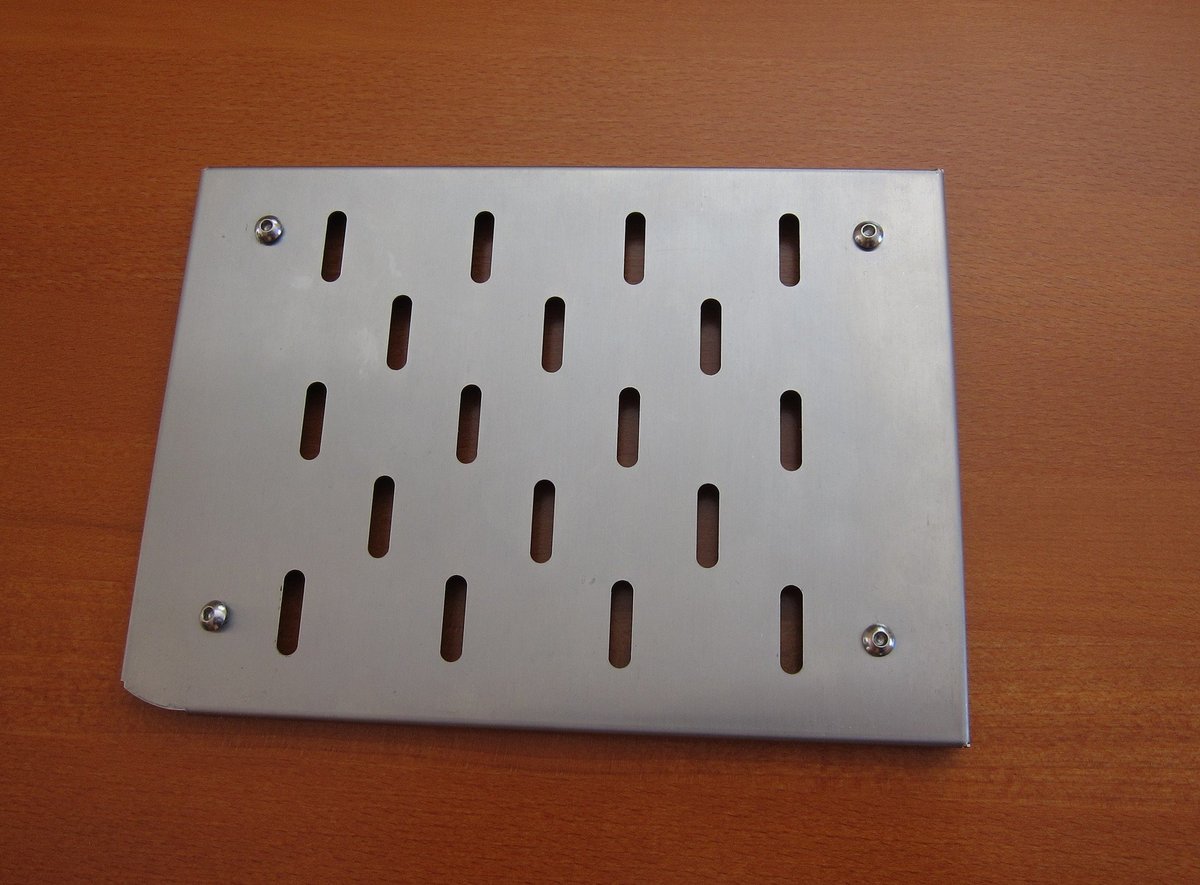 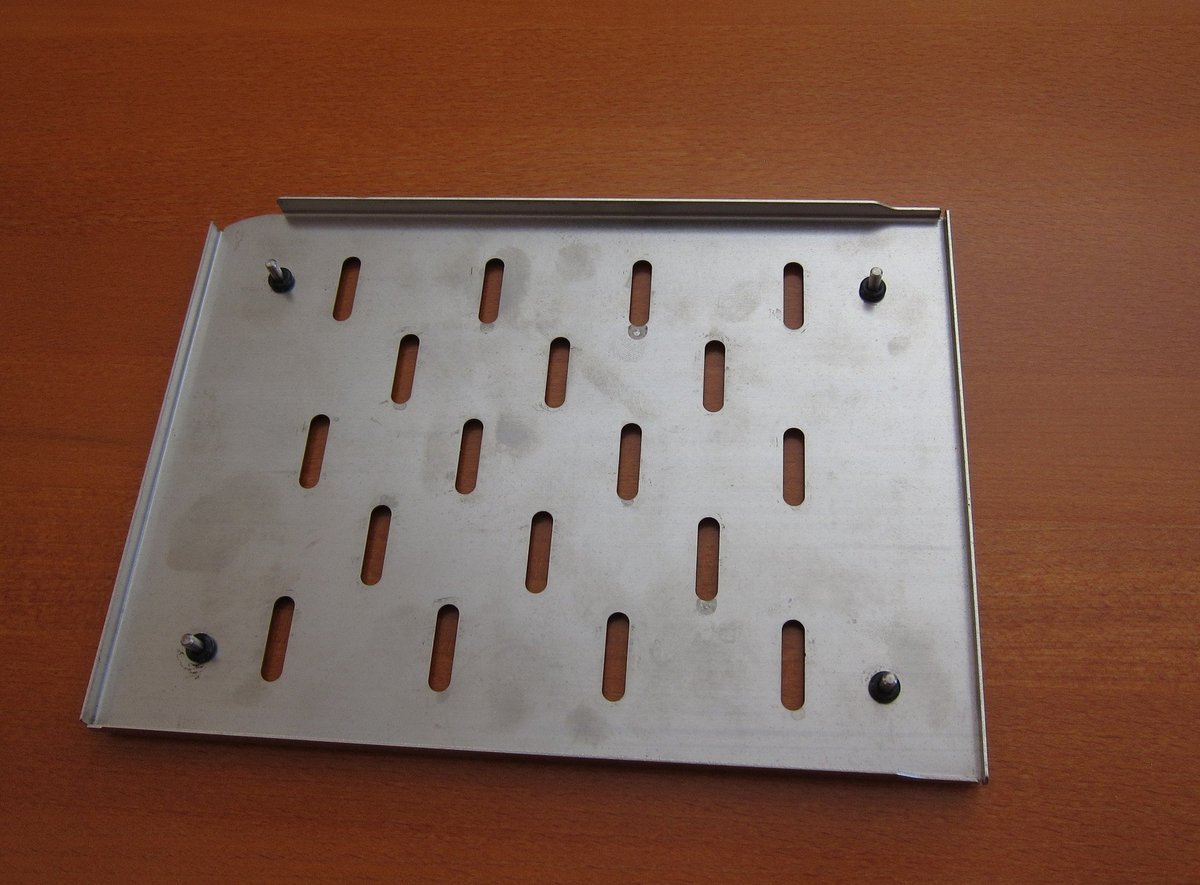 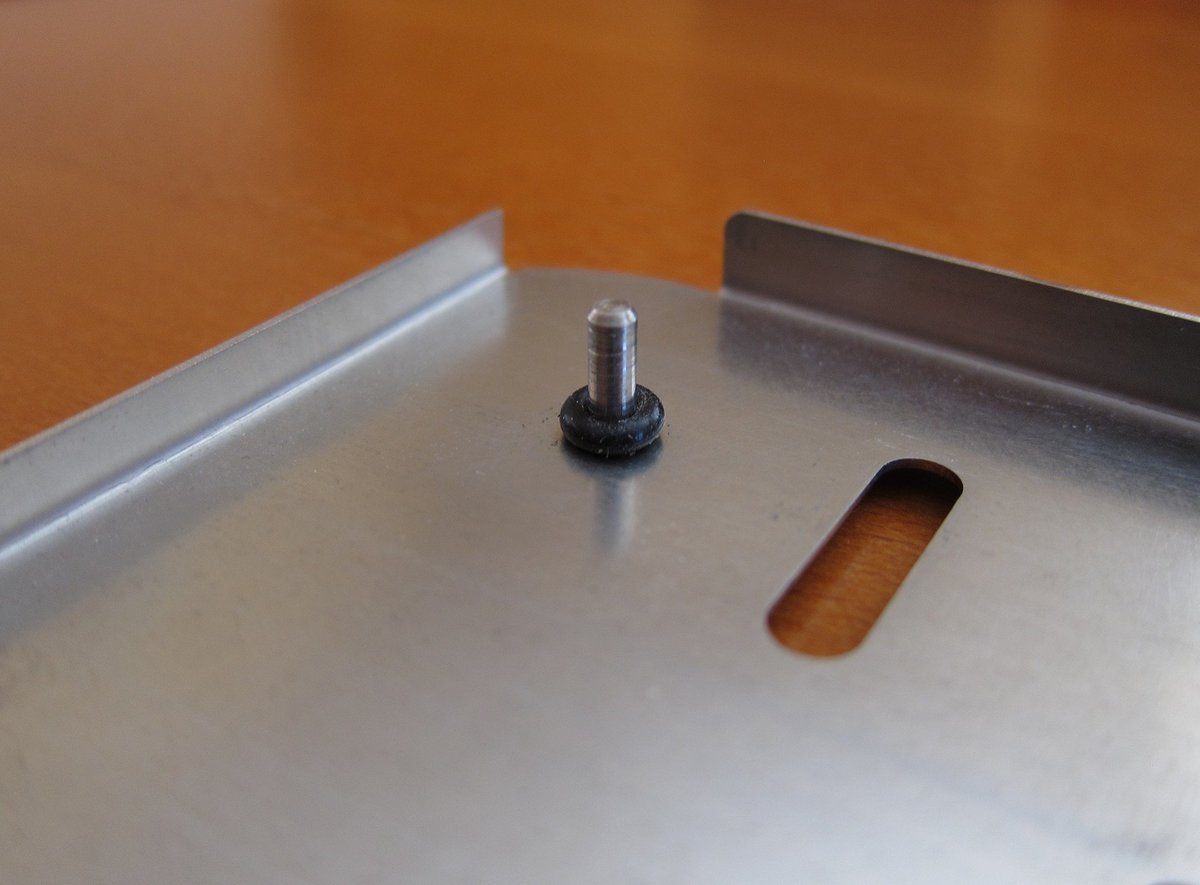 Final features
- All upgrade is undoable to factory default, there are no modifications to original parts, components, electronics, wiring or tubings.
- Flow profilling electronics (timer) is triggered automatically when the lever is pushed to any extraction position and ends automatically, when extraction is finished or lever lifted to OFF position.
- In idle state there is no added flow restriction from the pump (e.g. when steam boiler needs to be refilled).
- Each flow valve can be set to any desired flow according to the flow rate showed on the Studio display with extraction lever in manual position and timer set to aproppriate setting (few clicks of the buttons on timer electronics on fake rear panel in the water compartment). The only limitation is, that „medium flow" must be higher than „low flow" and must be set as a second.
- 2 pre-set flows (let's say 2.0g/s, 4.0g/s) plus factory default flow (ca. 7 - 8g/s) can be combine in 30 steps, each step allows to set one flow and time period in tenths of seconds (max 99.9s).
- Flow/time programming is done via buttons on timer electronics accessible in water tank compartment when right cup tray is removed. There is also timer display which shows remaining time of each step a green signal LEDs, which show which flow is in progress. For repeated extractions there is no need to watch the timer display nor to tweak with the programming.

Praxis
I use almost exclusively only low flow setting for PI. I've found the 2nd „medium flow" (e.g. flow decrease at the end of the extraction) affects the taste not that much (light roasted coffee, fresh roast) - yes, maybe sometimes I noticed something, but that might be also placebo - maybe I need to play with the machine a bit more, a bit longer. Steps and time programming is quite easy, usually 2 steps are enough. I also appreciate automatic flow controll because of guaranteed repeatability. Not so important, but the other benefit is water saving when cleaning the shower screen after extractions with the lever in manual position, thus low flow is in progress automatically.

Issues
Rarely, (ca. 1 of 100 extractions), timer is not triggered on, so I get standard extraction w/o flow profilling. I was not able to analyse logically, what's going on, since the trigger signal is taken from grouphead solenoid and issue is rare only. I can live with that.

Not so good
Due to a bit more protruded timer tactile switch buttons on fake rear panel I can't remove water tank easily unless the case (or side panel) is removed - that was not in a plan. Not a problem, since I do not remove water tank to fill it (I use a funnel), just occasionally if need to clean it. It looks like I will have to shorten the existing buttons because I can't find suitable smaller type from my supplier.
There is no flow autocalibration, so from time to time I check the flow rate and adjust it, if necessary (ca. once in 2 - 3 weeks, I don't know exactly), example: was set (desired) 2.0g and actually is 1.9 g/s. Not a big deal because I use to check the flow when cleaning the shower with the brush and adjust it that time (low flow is in progress automatically, no necessary to any „tweak" with the timer).

Resume
Even after flow profilling this is not a Mina. There are only 3 flows available, no BT connection and apps, no stored profiles and no manual flow profilling (which can to stored), maybe also other significant differences, but I don't know Mina that much. However flow profilling, even simple one, allows almost infinite play with coffee, which is limited only by time or wish to do so.

It definitely makes your DC Studio unique and more "flexible'.

Most people don't have the skills needed to do something like this, even less so to design and develop it.

You just definitely set the bar high for others!

Thank you for nice words.
It makes sense to do it, if the basics are worth it, and Studio definitely is ...
Top

Few more videos of flow profiling testing
Top
← Back
By accessing this site, you agree to the site's terms of service. If you need help with the site, please contact us.