Can someone please explain false pressure?

I have a NS Oscar and I've always cracked the steam wand after warm up to relieve false pressure to the Pstat. Can someone please explain why this needs to be done? Is there really likely to be some pressure differential in the system that would throw the Pstat in any significant way??

nixter wrote:Can someone please explain why this needs to be done?

I asked the same question in What is the purpose of a vacuum breaker valve. Eric provided a helpful diagram: 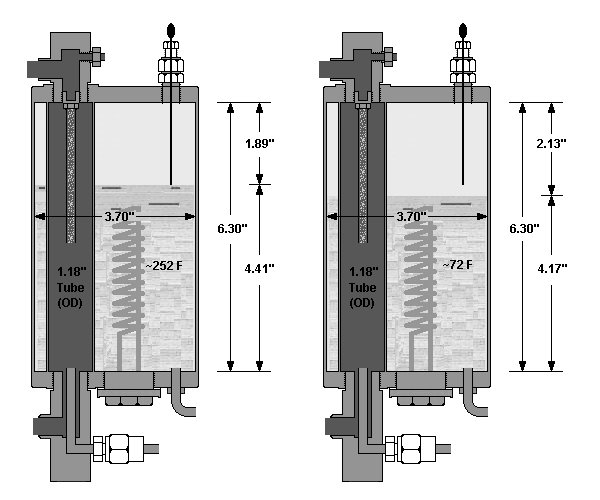 The volume above the water level is greater after the boiler cools, producing a vacuum. Also, as Ian noted, the steam cools and condenses; once reheated, the boiler isn't completely filled with saturated steam, so the boiler temperature is lower because the vapor pressure of water vapor / air mixture is higher than pure water vapor. Jim elaborated on this point in the same thread:


another_jim wrote:"False pressure" is air pressure rather than steam pressure. Air expands and hits a level that will fool the pstat before the water even reaches boiling. A temperature PID would not be fooled and would not need a vacuum breaker (although the initial steam output would be thin). I have no clue where the air comes from if there is no vacuum breaker and the system stays sealed; but if the pressure isn't from water, it has to be from air.

Ok interesting. So assuming the system stays sealed after things cool down then is there likely to be false pressure when the boiler heats back up?
Top

The Oscar doesn't have a vacuum breaker which is why you have to relieve the pressure by cracking the steam valve.
Top

One simple way I used to explain this to customers is:
Everything expands when heated. Gases expand faster than solids. In the case of a steam boiler with air and water; when heated the gas (the air) expands much faster than the solid (the water). The pressure in the boiler increases quickly due to the expanding air. The expanding air causes the pressure switch to activate, turning off the heating element. Once the air is released and is replaced by water vapor then everything returns to normal.

BillC
Top
← Back
By accessing this site, you agree to the site's terms of service. If you need help with the site, please contact us.