I've been using my BDB almost a year, and it makes great espresso. One thing I'm curious of is the temperature displayed. When it is started from cold, temperature climbs up to the set point. The interesting part is, if I decrease the set point, for example, from 93C to 91C, after it reaches 93C, the temperature reading will immediately become 91C. It seems the temperature dropping process is missed. Also, after brewing, temperature will stay at set point, instead of normally dropping by several degrees(makes sense for a small brew boiler), although I can hear the element starts working.

I have experience with other PID machines, and usually the temperature swings around the set point.

So my question, is the BDB temperature display a partial real time readout?

If there has already been a similar topic, please let me know. Thanks for any inputs.
Top

This is obviously useful to determine status of the boilers etc and test the accuracy of the NTC sensors.

To Enter the self check mode.

"NTC stands for "Negative Temperature Coefficient". NTC thermistors are resistors with a negative temperature coefficient, which means that the resistance decreases with increasing temperature. They are primarily used as resistive temperature sensors and current-limiting devices."

How I roll:
- This probably works just fine but I like to hedge my bets. Before I use it I let my BDB heat up for about 30 minutes from cold. If It is in standby, I usually let it come to temp and sit at temp for 10 minutes. This gets everything including the portafilter nice and toasty and thermally equalized. Then if I need to reduce the temp, I flush a bit, the brew boiler is small so I just flush a few oz. then leisurely prep my shot and pull. If I increase the temp, I just leisurely prep my next shot to give it 1 or 2 minutes to increase in temp. I usually only change temps when I am dialing in and it is only 2-5 degrees. I tend to go through 1 - 5lbs of coffee at a time so it is not like I am pulling a shot of a dark roast at 198 and then a light roast at 205 and then back to 198 for another dark roast.

Thank you for reading my book 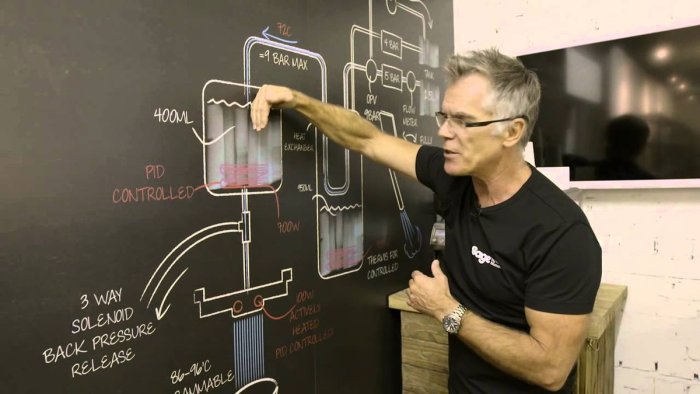 I will try the self check mode when with the machine. It depends which number you choose to display, the set one or the instantaneous one, am I right? From factory, the machine will only display the set temperature after it first hits the target(just my guess).

I knew there are three PID modules in BDB, controlling the temperatures in brew boiler, steam boiler and group head respectively, and the one on the group head is not adjustable.
Top

I have no idea how to use the self check mode. I just got that information yesterday.

I haven't read Chris' usually very informative posts but I'll chime in some memories and experiences:

1) Somewhere in the past, (when he used to participate) Phil said that the temp in the display is not the brew boiler temp like it would be on say, a DBPID e61 or a saturated brew group machine. But rather, It is "what you would see if you performed a Scace test". He said they used Scace devices to calibrate the interaction between the PID brew boiler, and the PID heated group head so that what you set is what you get coming out of the group. I believe this is similar to the strategy used by DE as well.

2) Since I have refitted my BDB with a rotary pump, it can now flow at least 20ml/s (stock is 7-8) in open free flow with no portafilter, if I open my needle valve a good way (say three turns). If I do this long enough, the temperature in the display will begin to flash. This is telling me that it can no longer keep up with the rate at which cold water is coming in, to where what is set in the display can no longer be assured at the puck.

3) Recently, I had occasion to run the brew temp up to 205 for a recalcitrant bean I was trying to tame. But later, I wanted to make myself a single serve brewed coffee (which you can do with the "Slayer mod") and I like to do those at 190. When I ran it down from stabilized 205 to 190 it flashed for a bit, presumably until the PIDs talked to each other and decided this would be possible (probably by telling the group heater to rest for a bit).

One more thing since Brendan Hennessey's amazing treasure trove of tech... I can confirm that the firmware on the -900 is different than the -920. I had a -900 all the way from since they first came out in fall 2011, up until about a year and a half ago, when I "traded it in" for a -920. And certain keystroke combinations to access special menus were different from one to the other. Some of the Aussie info is for the -900, not the -920 that most of us have nowadays. I hope that at least those diagnostic keystroke combos presented for the -900 also work for the -920. :fingers crossed:

Update... they do work. I got into a menu that reads the temperature sensors on steam boiler, brew boiler, and group. Neato!

Thanks Peter, question answered!
Top
← Back
By accessing this site, you agree to the site's terms of service. If you need help with the site, please contact us.