lancealot wrote:285. I have wondered the same thing.

It's... possible of course. But we're only talking about an 8 psi increase, from 45'ish PSI to 53'ish absolute pressure. Of course that An 18% increase in absolute pressure so not quite trivial.

For the record, I still had my old -900 until summer 2018 and that only had the tiniest drip after six years. Probably first developed at three four, but it never got much worse. The-900 did not have selectable steam temperature. Now that I've had a -920 for the last year and a half, I haven't bothered to change it hotter. I don't drink many milk drinks and when I do they are tiny amounts of milk so the lower pressure gives me better control anyway.

So maybe my good steam valve durability has been due to running at lower pressure? :shrugs

pcrussell50 wrote:
So maybe my good steam valve durability has been due to running at lower pressure? :shrugs

I believe that might be true for many machines. The difference in psi may be small, but over a period of several years ? Especially for folks doing big gulps, 2 at a time daily. In the case of the Breville, there is also a build difference between it and a 6k machine...I'd guess.
From personal experience (YMMV) my Strega suffered several steam wand leaks due to some less than hardy seals, and faulty construction. Stuff happens. What I'm loving here is the ingenuity displayed by posters. Also, for the price, this machine "accidentally" or otherwise, offers tremendous bang for the buck.
As I can no longer work with a manual, or even spring lever due to arthritis, I'm looking forward to sometime in the near future joining the "club."
Rob
LMWDP #187
www.robertjason.com
Top

pcrussell50 wrote:It's... possible of course. But we're only talking about an 8 psi increase, from 45'ish PSI to 53'ish absolute pressure. Of course that An 18% increase in absolute pressure so not quite trivial.

So maybe my good steam valve durability has been due to running at lower pressure? :shrugs
-Peter

Since I have Aflas seals and make 40-50 coffees a week (large household), > 50% with milk, I'll be the 285F guinea pig. I am hopeful that the Aflas and lube will provide a longer lasting solution (Aflas is rated excellent for steam, silicone rated moderate).

On another note for those curious about water recipes, I wanted to post a picture of the RPavlis formula, which I learned about from Peter. Distilled/RO can be slightly corrosive to a machine and is not conductive so probes may not measure correctly etc. But typical city water is way too hard - and we all know scale is the death of any espresso machine. So make your own. 0.40g K2Co3 per 4 litres distilled water (~$1/jug).

Here is what that small amount looks like. Peter, please correct me if I am wrong on the recipe here 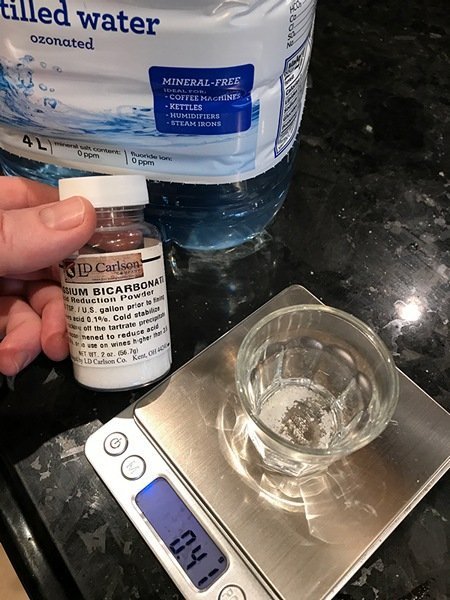 Yes, that is correct.

Though there is a rathole of subjectivity you can peek down if you have a sensitive tongue. This formula of 100mg/l of distilled water is not a pharmaceutical precision affair. Dr. Pavlis at times will say 50-100mg/l of potassium bicarbonate OR sodium bicarbonate for that matter. Getting subjective here, he claims that potassium has less of an effect on taste in the cup than sodium does (though at these amounts the effect on taste will be small), and that he varies the amount of potassium he adds to his distilled water based on the degree of roast in the bean. IIRC, he uses less buffering ion (the bicarbonates we're talking about here) for darker roasts.

For simplicity's sake, some people make up a bottle of concentrated bicarbonate (K or S), and then add a calculated amount to their jug of distilled water. This helps with mixing and dissolving and such, since with the bottle of concentrate you are already dissolved. And Brendan, a power user like you... you could buy big 20l jugs (5 gal jugs for the USA persuasion) of distilled water too. There are various power and manual pumps you can get to pump it out. Dunno. Just thinking out loud.

Me? I don't have a terribly sensitive tongue. So I stick with adding 04.g potassium bicarbonate to a gallon jug of distilled water and don't experiment too much one way or the other... this is for my copper and brass lever machines. Full disclosure about my BDB though: My BDB is plumbed. So I don't mix water for it. It also has a rotary pump. So I have an under-sink espresso specific softening filter who's OUTput I run to the INput of the pump. Then the OUTput of the pump goes up and out the granite counter and over to the machine. Note: I didn't drill a hole in the counter for this. I just used the hole that was already there for the soap dispenser that nobody uses anyway.

Wow Chris. Yours came in only 30 days! I think mine took 60 days, or at least it felt like it.

One thing I must say...persistence pays off when ordering these "hard to get" Breville parts.

One last thing. As you know the steam temperature can be adjusted from the default 275F to 285F. I had mine at 285F to speed up milk texturing. I wonder if this increased heat and pressure could cause early failure for the steam boiler seals and ball valve etc.?

Has anyone else set the steam temp to max 285F

275F it's whole life (3 1/2 years) still leaks. Replaced oem after 3 years. Half year with new valve, starting to get small drip from nozzle.
Bob "hello darkness my old friend..I've come to drink you once again"
Top

BaristaBob wrote:Wow Chris. Yours came in only 30 days! I think mine took 60 days, or at least it felt like it.

One thing I must say...persistence pays off when ordering these "hard to get" Breville parts.

Bob, check you inbox in the next hour or two...

In the meantime, both of you guys appear to have suffered with "the black ball syndrome". I'm still mulling over Brendan's experience with a pitted ball, and comparing with the ratty old ball valve from an ancient -900 that was donated to me as a hopeless leaker... even that ratty old thing, the ball inside it was not pitted and black. It was certainly darkened in the area that gets impinged by the steam. But it wasn't badly pitted and it was only that area. It didn't look nearly as bad as Brendan's ball. And after a year running with nothing but flipped seals, it's still going strong. The nice new ball valve that came with my mid 2018 -920 is sitting in a shoe box unused because that old -900 valve is still leak free.

Anyway, re "black ball syndrome"... Brendan, have you been using Pavlis water the whole time with that ball? Or did you use plain distilled or RO for a while. As you correctly fingered, overly pure water doesn't want to be, so tries to pull stuff out of the metals... causing pitting and wear. That is why we add buffering ions to distilled water. It makes the water happy, which then makes our machines happy. Anyway, is it possible that the "black balls" out there have seen some overly pure water or water with chloride (which is not chlorine) above say 30ppm?

Funny side story for Canadian Brendan: Before we figured out how to rebuild these valves, I bought not one, but TWO spares. BOTH from Forum Home Appliances in... Canada. I think I bought the last two they had. They said "two in stock", I bought both, then a week later they were no longer listed.

pcrussell50 wrote:Anyway, re "black ball syndrome"... Brendan, have you been using Pavlis water the whole time with that ball? Or did you use plain distilled or RO for a while.
-Peter

I started using filtered water for a few months but knew scaling eventually would occur so after reading the HB forums I moved to the RPavlis formula. I did have the machine serviced under warranty in Sep 2019 for leaks and they did descale it.
Top
← Back •
By accessing this site, you agree to the site's terms of service.