So far works, but it's fairly new.
Sure sometimes it can be stacked. You could try to descale it first or treat (or even soak) with something like WD40.

Sometimes for round parts I use sticking foam tape (leather wrapping should be even better). On tight grip there still will be some scratches but not as bad. (Silvia's steaming wand)

Peter, I doubt that any thread locker was preventing you from getting the valve open. More likely would be that the parts seized due to the cycling of hot to cool or from mild corrosion/scale. Either way, gentle heating or cooling to expand or contract the metals can work (as you found out) or soaking in descaler or a penetrating oil can help if it is seized due to scale/corrosion.
Top

I considered that. But one of them is brand new. And the thread locker is not on the 1/8 BSPP Breville parts that screw into each end of the ball valve. It's on the threads you don't see until the ball valve itself is opened up. I'll post some pics tomorrow.

For me it actually was easy to open the valve. For the first time I did it by unscrewing round part wrapped as on my Silvia pic. I guess important part is to have matched tools. They have to fit firmly parts you are working in. Solid Allen key (mine from pic was not solid at all) and vise mounted valve should work even on stacked threads. If not then as you did it it can be heated or treated other way but still opened with Allen to avoid to much image.
Top

lancealot wrote:Peter, I doubt that any thread locker was preventing you from getting the valve open. More likely would be that the parts seized due to the cycling of hot to cool or from mild corrosion/scale. Either way, gentle heating or cooling to expand or contract the metals can work (as you found out) or soaking in descaler or a penetrating oil can help if it is seized due to scale/corrosion.

This was a brand spanking new, never used ball valve. So it wasn't corrosion or scale, (or non-scale minerals, which can also accumulate), or hot-cool cycling. The 6mm female hex threads were almost stripped from the force I was applying. Then I heated it and it came apart like butter... Almost literally. The sealer they had on it turned soft and it came apart easily.

Here is a pic of the part with the sealer: 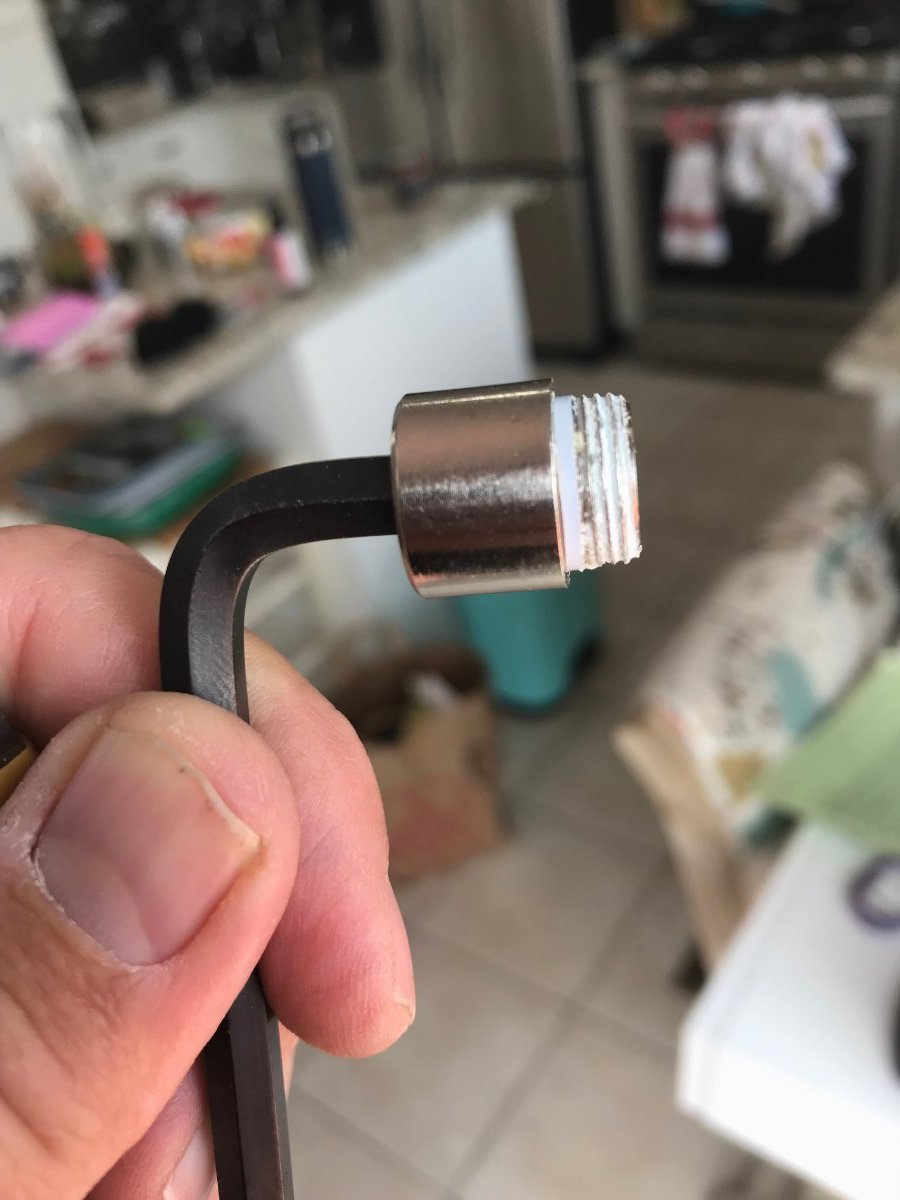 When the sealer cooled off, it hardened again.

UPDATE: my age-old, donated (by klund), ratty old ball valve that all I did was flip the old seals, is still sealing like a champ after what seems like more than a month now. Breville Dual Boiler ball valve detail, pics

Would you look at that. Thanks!
Top

pcrussell50 wrote:So I have high hopes that the 1mm OD PTFE washers I ordered off ebayZon will also work, when they get here.

Did you receive these washers, and have you had a chance to test them with the steam ball valve? My 1-year-old BDB is starting to leak from the steam wand - it's very minor so far with a single drop about every 5 minutes. Since my leak is so minor I'll probably wait until I'm close to the 2-year mark and then get it repaired under warranty, but I plan to have this machine long-term so I'm following this thread with interest

Yes, I got them. But I haven't tried them because I the first thing I did was to merely flip the original ones, so that the conical surface of the PTFE washers, the surface what was against the ball, is now away from the ball. PTFE is basically a slow flowing liquid (not exactly, but it does what we call, "cold flow") so that a new surface will form against the ball surface. The good news here is that you don't have to tighten it ALL the way down once you've flipped the seals. Just tighten enough so you can feel some friction in the steam handle as you sweep it. Then when the next leak develops, tighten it some more. When it's finally bottomed out, and leaks again, you can either flip the original seals again or try some new ones.

For one drip every five minutes, I wouldn't even bother. Me personally, I'd wait until it becomes one drip per minute or so. But that's just personal taste.

Anyway, long story short, I have the replacement seals, but have not tried them because I wan't to see how much mileage I can get out of the originals.

I just pulled my steam valve apart this morning and flipped the teflon seals. So far no leaks. Prior to the repair I had a relatively steady steam leak from the wand. I'm guessing this will last quite a while, and if it starts leaking again I can do the same repair again. The whole process takes less than 15 minutes once you know where you're going.
Top

Congratulations! And thanks for reporting. It helps the community a lot when I'm not the only one doing this stuff. The more people who do it the more validation AND the it helps to have other perspectives and input.

Just two things to add...
1) when you flip your seals, make sure the seals and the ball have no loose debris that can embed into the seals.

2) once flipped, you do not have to tighten the two halves down all the way. Just tighten until there is some reasonable friction when you swing the steam lever. The reason to do this is that when you get your next leak, you might be able to fix it just by more tightening and not just flipped again. How cool would it be to get two seals per flip instead of one?

That's all I've got. Well done.

-Peter
LMWDP #553
Top
← Back •
By accessing this site, you agree to the site's terms of service. If you need help with the site, please contact us.