The term café-espress has been used since the 1880s, well before espresso machines existed. It means coffee made to order, expressly for the person ordering it. It also means coffee fresh in every sense of the word:

Ideally, all cafés and restaurants would serve even their regularly brewed coffee as espresso in this larger sense—freshly ground in press pots, neopolitans, vacuum brewers or table top pourovers. The aroma of good coffee is delicate and dissipates in a matter of minutes after grinding, whether it is brewed or not. 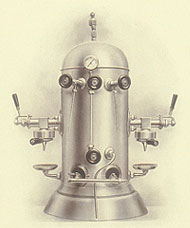 People are in a hurry. For many workers, waiting five minutes for coffee to brew is too long. They were also in a hurry 100 years ago when inventors started looking for faster ways to brew coffee to order. It being the age of steam, the first attempts used steam rather than water. A steam brewing contraption at the 1896 World's Fair is said to have made 3000 cups per hour. Unfortunately, steam-brewed coffee tastes awful since coffee generally needs to brew at just below boiling (195-205°F or 90-96°C) to taste its best. In 1901, the Italian inventor Luigi Bezzera came up with a workable solution. Pavoni manufactured these first espresso machines in 1905.

This machine was also steam powered. However, the steam does not come into contact with the coffee. Instead, steam pressure at the top of the boiler forces water at the bottom of the boiler through ground coffee. The coffee is held in a group consisting of a portafilter, a metal filter basket and removable brass mount, and a brew head into which the portafilter attaches. The piping and group were designed to act as heat radiators, so the temperature of the pressurized water dropped from 250°F (120°C) in the boiler to the correct brewing temperature at the grouphead. This brewing principle is still used in stovetop mochapots. Since the water was pressurized, the coffee could be ground finer than in a regular pourover brewer, reducing the minimum brewing cycle from about 4 minutes to 30 seconds. Espresso machines and their accompanying coffee grinders became the standard equipment for making coffee in Italy, Southern France, Spain and Latin America. In other parts of the world, it followed Italian immigrants who popularized it in each country they settled.

But technology moves on, and this method is no longer regarded as specifically espresso, although mochapots and other steam pressured brewers continue to be marketed under the name. In the 1920s through the 1940s, Italian engineers experimented with pumping devices to increase the brewing pressure. The first practical one was developed by Cremonesi in 1938 and manufactured by Achille Gaggia in 1946. It used a hand powered piston. On machines of this type, steam pressure in the boiler forces the water into a cylinder, but then it is pressurized further by a spring-powered piston to about 8 to 9 bar (120 to 135 PSI), or 8 to 9 times the pressure that had been developed by the steam machines. The spring that powers the piston is compressed by a lever forced down by the barista (Italian for barkeep)—the person making the coffee. As with the older generation machines, these lever groups are designed to cool the water from boiler to brewing temperature. 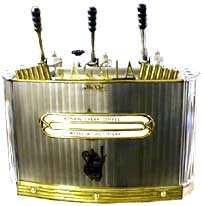 Now we have modern espresso in the restricted sense of the term—coffee brewed with water at 8 to 9 bar pressure between 90°C to 96°C. This technology also explains why modern espresso uses the same amount in a small one ounce drink as was previously used in 2½ ounce demitasse espressos or five ounce regular cups of coffee. The pressurization cylinder could only hold that much water, otherwise the arm strength required to compress the spring would have been prohibitive. Finally, if it's done just right, the added brewing pressure creates a nice layer of foam over the coffee called crema.

What's this scum on my coffee?!?

Legend has it that the first patrons to drink the new potion at Gaggia's coffee bar didn't think it was so nice. They asked, "What's this scum (sciuma - foam) on my coffee?" So in a marketing ploy, Gaggia called the new drink "caffè crema" instead of espresso. For about a decade, espresso machines were made with some groups using the old style one bar steam pressure and others using the new-fangled nine bar spring-lever pressure. But in time, the new style won out and became the true espresso. The term "caffè crema" died out, only to be revived for another style of coffee drink by the Swiss in the 80s. 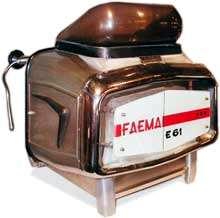 The next innovations were commercialized in 1961 by Faema. Instead of a piston situated between the boiler and ground coffee, they used an electric pump to move cold water through a heat exchanger that traversed the boiler to the grouphead. The heat exchanger was designed to heat the water to the correct brewing temperature. Since the group was no longer used to cool the water, it too had to be held at the correct brewing temperature. Faema used a hot water circulation system to keep the group hot; other manufacturers used a hot water jacket or kept the group in close thermal contact with the boiler for the same purpose.

The cylinder on lever groups only held an ounce of water, limiting the volume that could be used to prepare an espresso. There are no such limits for an electric pump. So why hasn't espresso gone back to being a regular or demitasse cup of coffee, only brewed more quickly using pressure? This is precisely what the Swiss do for the drink now called a café crema. However, by the time the newer electric pump models came out, espresso had become its own drink category, and people had developed a taste for the "little cup." The only change to espresso created by electric pump machines is the introduction of the double espresso—double the water and double the coffee for a drink with the identical concentration and taste.

Home lever machines had been designed since the 1960s, but they didn't achieve a mass market because of two severe shortcomings: the groups were too small, so the coffee would overheat after a few shots, and the shortened levers required considerable arm strength. The next big breakthrough came in the late 1970s. A company called Ulka introduced a small, inexpensive pump that could still produce the pressure required by modern espresso. This made affordable and small home pump espresso machines a practical possibility. Gaggia and Quick Mill brought out the first models and many other manufacturers soon followed.