These are the actions required to fill the portafilter with coffee and get it ready for pulling the shot. 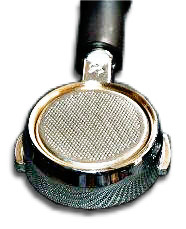 Setting the grinder has been discussed previously, now let's look more closely at the actual grinding. Many grinders have storage for the ground coffee and provisions for dosing it. This defeats the purpose of espresso, which by definition is about doing everything fresh. So first get rid of any old grinds, then grind just enough for the shot. On espresso grinders with dosing chambers, this requires flicking the dosing lever repeatedly until the chamber is quite empty. It also means clearing out the exit chute from the grind chamber, which will otherwise clog with stale grounds, using a small brush, chopstick, or similar small non-metal implement (never your fingers!).

The nominal doses for espresso are 6 to 7 grams for a single and 12 to 14 grams for a double. Recently, many cafés have raised dose sizes to 8 to 10 grams for a single and 16 to 20 grams for a double. Whatever the dose, consistency is the key. Weighing the grinds is accurate but time consuming, so using the same volume each time is the most popular choice for dosing. The most common method is to grind for a preset time (a photo lab developing timer is a good add-on for this), filling the basket loosely with grinds, then leveling it off and discarding the excess grinds. Some baristas prefer a slightly overloaded basket. In this case, the most repeatable method is to tap the basket and portafilter a few times to slightly compact the grinds prior to leveling them off. This will add about 20% to 25% to the dose. Finally, some home baristas prefer to dose by measuring the volume of the amount of beans they put into the grinder. As a rule of thumb, a leveled coffee basket full of beans delivers the same amount of coffee as the overloaded basket technique. Which technique you use is less important than sticking with it and learning to be consistent. It's a good idea to weigh the coffee after dosing for a few days until you become fairly consistent (within 0.5 grams of the desired weight).

The most common method to get this is to combine leveling with sweeping excess coffee from the basket. Prior to sweeping the grounds away, use your finger to move the grounds gently around the basket to fill in all gaps. An alternative, for those with larger palms accustomed to heat, is to press lightly on the grounds with the thumb part of the palm, and rotate both it and the portafilter to distribute them evenly. This technique is known as the Stockfleths Move (video). If you have a tamper slightly smaller than the basket, the Staub tamp, a rotating motion by it, or very lightly tamping in the four compass directions, prior to heavy tamping will also work. Finally, you can lightly level the grounds several times while filling the basket using the small tamper attached to the grinder.

Tamping means taking a cylindrical press that fits snugly into the basket and compacting the grounds prior to the shot. The object is to seal the puck so that the brew water moves through it evenly without finding weak spots. Channeling occurs when the pressurized water gushes through the weak spot while not flowing anywhere else, thereby spoiling the shot.

The classic tamp is a straight down press at 30lbs pressure, followed by a light twist to settle any stray grinds. In Italy, it has become the custom of most cafés to grind slightly finer and use a very light tamp (about 10 pounds) using the tamper mounted on the coffee grinder. Stronger baristas may use heavier tamps, while some use a nutating motion (rolling the tamper in a motion like a flipped coin settling) to accentuate the pressure towards the edges of the basket. An alternative to the nutating motion is using a convexly curved tamper, which accomplishes the same thing.

If all these alternative ways of leveling and tamping leave you bewildered, take some comfort in knowing that most experts are just as confused, and that there's help. A recent innovation known as the naked portafilter (shown above) allows you to see directly how well the extraction progresses. The naked portafilter is not the latest wrinkle in pornography, rather it is a portafilter in which the bottom has been sawed off. So, instead of being directed into a spout, the coffee exiting the sieve at the bottom of the basket drops directly into the cup. If the level and tamp are correct, the espresso will quickly collect at the center of the basket and descend as a single stream into the cup. If it is incorrect, little sprouts will squirt off in all directions making a mess. A few days with a naked portafilter will guarantee that your leveling and tamping techniques, whatever they may be, are working correctly. As a bonus, the stream off a naked portafilter is rather pretty (especially if flash photographed), the crema volume is increased, and there are no stale coffee oils from the bottom of a conventional portafilter getting into your espresso.