Despite its commercial pedigree, the Cimbali Junior espresso grinder doesn't demand much countertop space. And thanks to its low-profile hopper, it fits under standard kitchen cabinets without modification. 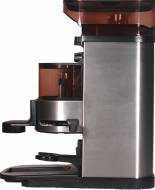 The Mazzer Mini and Macap M4 are no lightweights, but I didn't need a scale to know the Cimbali Junior was a lot heavier. Its larger burrs enables it to grind a double-shot worth of espresso faster than the other two grinders by a few seconds. The exterior is brushed stainless steel and squared off; it looks more "commercial" than the other two more flamboyant grinders. If your kitchen has stainless steel appliances that are so popular these days, the Cimbali Junior will blend right in.

One feature that really distinguishes the Cimbali Junior is its adjustment mechanism. A worm drive moves the numbered dial on the upper burr using an adjustment knob. Turning the knob clockwise makes the grind finer and counter-clockwise makes the grind coarser. The granularity of the adjustment will delight espresso hounds who want to tweak the grind to perfection; those who wish to change between widely-spaced coarseness for other preparations will be frustrated. It is no exaggeration that there's dozens of spins of the dial between an espresso and presspot setting. Realistically this is an espresso-only grinder and Junior makes no apologies for it.

Let's not kid ourselves—grinding coffee beans is not a quiet activity. The Mazzer and Macap make the best of it and muffle the noise very well. When they are run empty, their motors purr with precision. The Cimbali operates almost in the opposite sense: Under load, it growls with satisfying efficiency, but is noticeably louder when run empty. Its motor has considerable rotational inertia and continues to spin for what seems like a half-minute after being turned off if you grind until the hopper is empty. If the hopper has beans in it, the motor stops spinning almost immediately.

Of the six grinders, the Cimbali Junior's placement of the on/off switch is the most logical for frequent use. At first it seemed almost hidden beneath the doser and I stooped to see which two-button toggle I needed to press. But once I was familiar with Junior, I found the on/off switch was intuitively placed right where I would naturally have my hand after flicking the doser handle for the last time. The Mazzer has a timer switch and the Macap has a rocker switch, both of which are located on the side.