Anyone can see that the exterior finishwork is nothing less than showpiece quality. The gloriously polished stainless steel, smart styling, and clean lines set Elektra's equipment apart from the crowd. But once the casing is off, does the A3 merit the same effusive praise? Let's take a look. 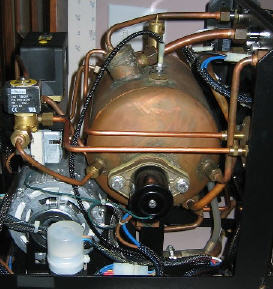 The required tools to denude Elektra are simple: A slotted screwdriver for the four screws holding on the U-shaped back casing, and a Phillips screwdriver for one screw holding on the cup warmer tray. The cup tray is composed of two square slotted pieces of stainless steel sheet metal. The upper tray rests atop the lower one; their vent slots are offset such that drips through the upper tray from recently rinsed espresso cups don't make their way to the machine's interior, but instead are caught on the second tray. Simple adjustments to the brew pressure and boiler pressure can be done by accessing the rotary pump and pressurestat from the top of the machine. The commercial-quality Sirai pressurestat is located in the top right corner; it's adjustment screw is beneath the black plastic cover with the yellow screw access cover.

Warning! Turning the machine off at the power switch isn't enough! Water, metal, and live electrical wires are a potentially deadly combination. Always unplug the machine before removing the covers to make any adjustment, no matter how small!

Although there's enough room inside to maneuver a screwdriver to the rotary pump adjustment screw, it's much easier if you remove the back casing. It's held in place with four chrome-plated screws, two on each side near the face of the machine. The back edge of the wrap-around casing has a small ledge that rests on the lip of the machine's frame. Take care that the back of the case doesn't drop off this ledge suddenly when you remove the screws, potentially scratching the inner cup warming tray area or the side facing. Given the beauty of the finishwork, I recommend finding a helper to hold the back of the casing while you remove the four front screws. Pay careful attention when replacing the back casing; it's easy to scratch the mirror-finished interior while sliding it into position. Get a second pair of hands and gently "stretch" the U-shaped piece ever so slightly until you position the back lip on the frame and the four holes align.

Once the covers are off, you'll see that there is lots of room in the casing and the layout is orderly and logical. The rotary pump is firmly mounted on rubber bushings to absorb vibration. The heavy pump mounts and extra spacing between components reduces sympathetic vibration and thus helps fulfill Elektra's claim of a "super silent" espresso machine. However, despite this extra attention to the interior layout's contribution to a quiet machine, I found that the driptray and controller cover beneath it sometimes vibrated. I added a few tabs of thin neophene (rubber) insulation to quiet them and then indeed everything was again whisper quiet.

You may be surprised to learn that some machines costing in excess of $1200 sometimes have no recognizable wiring harness—just wires going from point-to-point without consideration of what hot element they might cross or vibration point they touch. This can lead to irksome electrical shorts. Better espresso machines fasten the wiring to fixed points every few inches, and the particularly well thought out machines like the Elektra A3 add sheathing protectors to form a neat wiring harness. I also noticed an added strain guard for the main power line (a strain guard is a heavy plastic or metal coiled wrap around a wiring connection point designed to spread the tension through the length of the line instead of the endpoint). As a final example of thoughtful electrical construction, a black cap completely covers the heating element connections so there is no risk of a short.

There were a few areas that prevented Elektra from threatening the Cimbali Junior's lock on its materials & workmanship score of 10.0:

These small added features help with maintenance and reduce the risk of downtime, which are among Cimbali's biggest claims to fame. That said, Junior should not be lulled into complacency. The overall quality of the A3's materials and workmanship puts Elektra right on Cimbali's heels.