I've owned the Elektra Microcasa a Leva for almost two years; one of its noteworthy features is the wonderfully powerful and perfectly balanced combination of steam volume, velocity, and the tip dispersion pattern. It's almost effortless to steam glossy, rich, sweet microfoam every time. It was for this reason I hoped that the Microcasa's big sister would deliver the same ease, but on a larger scale.

Indeed, for professional baristas, the steaming power of this machine will be familiar. But for your average home barista, it's a beast. The feel is just a little less forceful than the La Marzocco 3AV at Counter Culture Coffee's espresso lab. That translates into frothing at a very fast clip, as shown below.

In addition to helping you create well textured microfoam, ample power makes it a lot easier to enhance the coveted sweetness of steamed milk during the stretching phase (if these terms are unfamiliar, see the well-written Milk Frothing Guide). However, if you are fortunate to start with the A3 as your first home machine, or have recently upgraded from a less powerful prosumer espresso machine, you may find the steaming pace of its four-hole tip a little intimidating. Literally five seconds of inattention risks scalding hot milk or worse yet dangerous splattering. If you prefer to learn the ropes at a more leisurely pace, I recommend temporarily replacing the stock tip with a pressure-limiting two-hole tip. Elektra's steam wand has a common size and threading (10mm male thread), so there's lots of choices. I tried the two-hole tips available from Chris' Coffee Service, espressoparts.com, and 1st-line equipment's Gold Pro 2. They all performed admirably, much like I would expect from the steaming capacity of the Andreja Premium on her absolutely best day.

When preparing a cappuccino for myself, I use the twelve ounce pitcher and about six ounces of milk. Company requests from my wife's friends invariable call for "big bowl" lattes of twelve ounces. While such large milk drinks aren't my personal preference, I was delighted how easily and quickly Elektra stretches and textures the milk. I'm not an accomplished latte artist by any means, but the Elektra and I have elicited oohs and ahhs from appreciative visitors.

Hint: To easily switch back-and-forth between different steam tips, use a small rubber O-ring instead of thread sealer or Teflon plumber's tape. Finger tight is enough to seal, and you can swap to a lower-volume two-hole steam tip for milk volumes of four to six ounces.

The stock tip's four holes are slightly angled outward. This dispersion pattern favors an initial dead-center placement of the wand in the milk at a depth of about one to one-half inch during the stretching phase. Stretching introduces air into the milk and heating continues to about 100°F. At that point, I prefer an "end over end" roiling for multi-directional tips. The end over end circulation is created by moving the steam wand to one side and tilting the pitcher slightly forward. This produces a standing turbulence wave as the milk below the wand is forced downward by the steam and the milk on the farther side of the pitcher recoils upward as the undercurrent curves back along the bottom (note this sort of rolling requires some serious steaming power!). 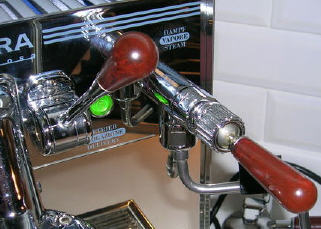 Steaming with the A3 is a genuine pleasure. I loved the steam power, but also admire the smart ergonomics. The L-shaped steam wand swivels easily to the back of the driptray for purging condensation before steaming as well as reaches readily to the bottom of the deepest pitcher. The wide plastic "grab tab" remains cool and doesn't slide around like some machines I've seen. The steam toggle switch and brew activation lever work well together. If you read the Bench comments from the earlier days of the review process, you'll find that I joked about the brew activation lever, comparing it to "THE REALLY BIG BUTTON THAT DOESN'T DO ANYTHING" of Internet fame. At first glance it appears to be nothing but an ornate lever that presses a microswitch. Like me, you might think that the shapely simulated woodgrain handle mounted on a long chromed lever is just a nod to appearances.

However, pretty as the fancy lever is, it isn't just for show. Somebody at Elektra thought to position it near the steam toggle switch and align it such that your hand is naturally right next to it when steaming. Flipping the lever down / flicking the switch of most machines to cut off the pump requires you reach away from where you're focusing while frothing. That's miffed me more than once when I've accidently injected a splotch of big bubbles.

Not with the A3. Your hand is nary an inch away. Flick one, pump off. Flick two, steam off. Thunk and pour. The steam toggle's light reactive touch works nicely in concert with the brew activation lever. Several visitors have commented on how attractive the Elektra A3 is and specifically mentioned how their eyes are drawn to the contrasting shapes and matching colors of the lever, two toggles, and portafilter handle. My compliments to Elektra for combining pleasing looks and practical use so effectively.