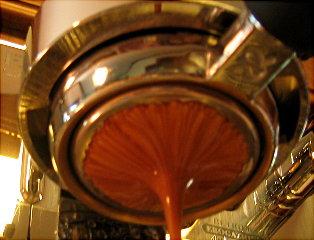 Anyone shopping for an espresso machine as expensive as the Elektra A3 probably has asked themselves: Which is better, a dual boiler or heat exchanger machine? The machine's boiler design has a considerable impact on the techniques the barista must employ to make exceptional espresso, so you should familiarize yourself with the benefits and disadvantages. This perpetual debate among home baristas occurs regularly in online forums, including those on Home-Barista.com. Home-Barista.com's own Abe Carmeli recently offered this succinct advice: "I believe the answer lies in your personal preference. Do you enjoy learning and applying developed skills to bring a certain 'artistic flare' to your espresso making? Or are you purely pragmatic—it's about a good espresso before facing the day? Few would dispute that similar top-end dual boiler and heat exchanger espresso machines are capable of exceptional espresso in the hands of a skilled barista."

I agree wholeheartedly with Abe's conclusion: It depends on your personal preference. A heavier responsibility for temperature management falls on the barista using a heat exchanger machine, since the all-important cooling flush fine tunes the boiler output to the desired brew temperature. That said, I was impressed from the first day how easily the Elektra A3 zeroed in the correct temperature, more so than any other heat exchanger espresso machine I had evaluated in the past. My cautious nature kicked in and I took steps to better understand why Elektra's temperature management seemed just a little too easy.

Hint: To better understand the issues and terminology involved with operating a heat exchanger machine, I recommend the overview in How I Stopped Worrying and Learned to Love HXs; although it focuses on managing the brew temperature of prosumer E61 espresso machines like the Andreja Premium by Quick Mill, many of its observations and suggestions apply to the Elektra A3.

Before discussing these extra evaluation steps, let's first quickly review the process of making espresso with the Elektra A3. That will give you a general feel for the machine's operation, plus add needed background to the commentary that follows directly thereafter.

Below are the steps for pulling your first shots. Let’s assume that you have adjusted your grinder for a reasonable 25-27 second extraction:

Remember to relock the portafilter back into the grouphead to keep it warm.

At the end of a session, I also recommend a quick water backflush to clear the pathway from the grouphead to the pressure relief valve that empties into the collector below the drip tray. Refer to Espresso Machine Cleaning - Why, How, and When for more details on cleaning steps and schedule that broadly applies to the Elektra A3.

Weeks rolled by with the A3 in my kitchen. For me the most noteworthy observation was the fact that the thermocouple, shotglasses, timers—all my "helper" tools of the review trade—remained in the drawer. Two possible explanations came to mind for my disinterest in these toys of technology:

While it was tempting to flatter myself with causal factor #1, factor #2 was more likely. To wit, I decided to introduce other players into the game. About six weeks into the evaluation, Home-Barista.com's moderator for the Lever Espresso Machine forum, Steve Robinson, welcomed the Elektra A3 into his kitchen (you can read his comments in the Bench forum). The reason I asked Steve to step in for this test was specifically because he's a hardcore lever guy who's never touched an espresso machine with a motorized pump. I figured that if he noted the same forgiveness factor, then my conclusions would be validated.

And indeed that's exactly what happened. What we didn't publicize on the Bench was the second phase of our study. Steve took a tour with the Cimbali Junior and provided me behind the scenes feedback. His comments are especially valuable because he's a seasoned veteran of espresso, but a newbie to commercial equipment (his travel and harried schedule are his excuses for not posting his comments on the Cimbali Junior, despite my not-so-subtle reminders). The long and short of his observations are supportive of the scoring in Junior's buyer's guide and this guide. Still, something was missing from the closure of the Elektra A3 review, something that I hinted about early in the forum's ongoing research. How would Elektra stack up against one of the best La Marzoccos available today?

Fortunately Geoff Corey, owner of Pheasant Creek Coffee, offered to host an informal mano-a-mano shootout one Sunday morning. So Elektra was on the road again for the short jaunt to Geoff's place. I allowed her to heat up for several hours on his setup table a few feet from his electronically temperature controlled three group La Marzocco FB-70.

As a quick double-check of Steve's and my "morning after" assessment, I prepared a few test shots for Geoff then turned the portafilter over to him. In about two or three shots the extractions were on target, so I asked him to serve as test barista for both machines. He would prepare the basket on the Elektra, then while I handled the cooling flush, he banged out an espresso on his own La Marzocco.

The taster would then be handed two espressos. Keep in mind that this shootout was an informal "let's have fun" event. Others joined us and we got heavily caffeinated, which for Geoff is not an easy feat. The results were surprising to me, not for the outcome, but for the lack of problems associated with brew temperature. Geoff heartily agrees that his house blend suffers if the temperature is off by even a degree.

So how did the Elektra A3 with its HX system fair against the FB-70's advanced brew temperature control system? The answer is the good news of the shootout: In terms of crema quality, crema volume, and taste balance, it was a dead heat. Some of the Elektra shots were "different" than the La Marzocco's, but not in a way that would detract from their scores. I've noted this before and it really comes down to personal preference and the particular blend which may favor one temperature profile over another (i.e., the slant-L versus humped temperature profile defined in How I Stopped Worrying and Learned to Love HXs). With the question of temperature consistency and stability to the side, the criteria that stood out was the difference in body. There the La Marzocco won.

Although the A3 earned laudatory comments like "nice, buttery espresso", I was frankly surprised by this outcome because from the very first week, the body and texture of the Elektra shots stood out far superior to my own home equipment. As part of our post-mortem of the shootout, we tossed out ideas of possible causes. Geoff noted that I had the pressure slightly lower than his machine (8.0 versus 9.0 bar), something that escaped my attention. It was getting late and our palates were toast, but as a quick test I increased the Elektra's brew pressure to match the La Marzocco's. If there was an improvement in body, we were too fried to tell. Before shutting down for the afternoon, I asked Geoff to prepare a cappuccino on the Elektra. He steamed and textured a nicely chrome-finished cap with deliciously sweet flavor.

I didn't arrange this particular shootout because I expected the A3 to whoop Geoff's equipment in his shop by his own hand, but rather I wanted his confirmation that indeed the Elektra was as intuitive and forgiving as both Steve and I had concluded. Of the four M's of espresso (mano dell'operatore [hand of the operator / barista], miscela [blend], macinadosatore [grinder-doser], macchina espresso [espresso machine]), I list the machine dead last. Not because it's unimportant, but rather because other factors like the barista's contribution count so much more. As I trundled back home with the steaming-hot Elektra in the back of the car, I concluded once again that while the espresso machine isn't #1, it certainly makes the job of #1—the barista—a lot easier. And in the case of the Elektra A3, that applied whether the barista is an home enthusiast (me), diehard lever espresso machine lover (Steve), or professional (Geoff).

As the final weeks of the Elektra A3 review wound down, an interesting barista tool known as the thermofilter was introduced to Home-Barista.com's Bench forum for evaluation. Although most look at the boiler temperature calibration aspect of the thermofilter, my interest took another tack. One of the most important goals of the buyer's guides and how-tos on this site is to provide steps on getting the most out of a given machine under the home barista's real world constraints. The biggest constraint is time. My weekday mornings are probably like other espresso lovers—we want the best possible shot in short order. There's little if any time for retries.

Brew temperature profiling helps tremendously in this respect, not only in showing how the temperature development affects the espresso's characteristics, but also in getting the magical "first shot, best shot" experience. I think this point is hard for professional baristas to appreciate; they toss out two or three "garbage shots" just to warm up the group. Ignoring the question of cost, I strive to develop a routine that optimizes the first few shots of the day as a practical necessity of getting to work on time.

Using the thermofilter, I wondered if I could further fine tune the A3's temperature accuracy, especially for those precious first shots that demand extra attention. These heavy group machines need an extra kickstart to get the system to the same temperature, which pro baristas deal with by just running extra shots... so how close could I get to that with flushing alone? Each time I started with a "very idle" machine, that is, at least 30 minutes of inactivity. Elektra is a fine looking lady, but as you can see in the photo to the right, she doesn't like to be woken up. 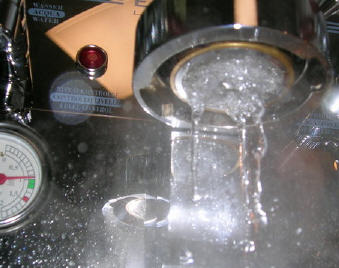 My first approach prior to the arrival of the thermofilter was a variation of the technique I applied for rousing commercial machines with heavy groups to simulate an extraction: Flush... wait... flush... wait... flush... pull shot. It helped the first shot, but the second and third were always better. Let's try it another way, and this time I won't have to waste a lot of coffee. My theory was that I could nail the temperature more accurately for the first shot by overcompensating slightly for the first flush. In other words, instead of counting off a cooling flush of "one Mississippi, two Mississippi... six Mississippi", add a couple extra seconds to warm the group up (just a tad more) and cool the heat exchanger (just a tad more). I measured the resulting brew temperature for each of the three first "shots" into the thermofilter, adjusting the first flush by small increments. I learned some tricks that let you zero on the right temperature from the get-go and reach a new level of heat exchanger temperature consistency:

These small changes have increased my temperature consistency, so much so that Geoff remarked that it was a non-issue in our shootout. That's high praise considering the capabilities of his gear.