Is body the enemy of clarity?

This chart from Crema in Nashville (via Sprudge.com) says body and clarity don't play well together: 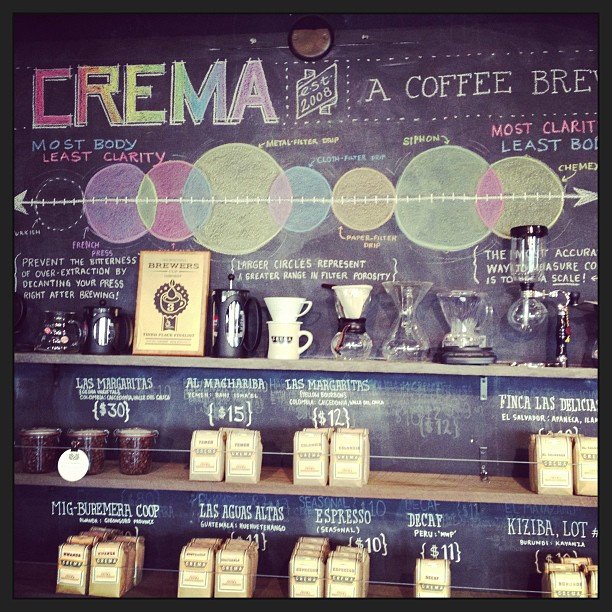 I think there is a lot of truth in that, but there must be exceptions. I just can't think of any off hand.
Marshall
Los Angeles
Top

One specific exception that immediately comes to mind is something like Temple Coffee's Kenyan Kamviu, which is a mind blowing experience of depth of body and yet, great clarity. Awesome bright, floral components in the aroma along with clean acidity. It's one of the most stellar coffee's I've had in the last year.

I don't think clarity and body are always mutually exclusive, but when they come together this nicely, it's not surprising to think that it gets rated 95 points.
Top

Ha! Perfect timing. Danetrainer's bringing some of that Kamviu to the Portland get-together tomorrow morning and there will be "some opinions."
Top

Click here for a good video on the same subject

These guys define clarity as the ability to separate (detect) the different flavors inherent in the coffee, and I think that's what Crema is saying with their chart.

I believe there's some truth in the assertion, but I'm bothered by several things:

First and foremost, I'm not convinced that with the right brewing parameters you can't detect all of the flavors inherent in a coffee when a high-body brewing method is used. For example, we espresso drinkers spend a lot of time tweaking the extraction to bring out the flavors inherent in the coffee, and the word clarity is often used in that connection, especially when we talk about grinders. But our discussion of clarity takes place against a background of massive body compared with drip and even immersion brewing methods. Any yet, we all speak as though there's a quite a bit of range in clarity that's possible with espresso.

Second, cuppers use a coarse grind immersion method to bring out as much body and flavor as possible. How could that be? If clarity equals flavor, why don't they filter the heck out of the coffee?

Third, the video points out that brewing methods which allow small coffee particles to get into the cup can result in over-extraction (bitterness) as the particles continue to extract in the cup. That will surely mask the flavors in the cup, so is it body or lack of balance -- or both -- that hinders our ability to detect the flavors?

All that said, I recall Jim Schulman once saying that he couldn't quite get all of the flavor profile out of one of the Geisha coffees brewed as espresso that he was able to get out of it as brewed coffee. Now was that a general statement about espresso versus brewed coffee, or something specifically related to the Geisha Jim was working with?

As with many things in life, I think we have multiple causality going on here, and that flavor is not about just one ratio: i.e., clarity versus body. Body and clarity are two variables in a complex flavor equation that includes the varietal, the processing method, the degree of roast, the grind, the brew formula, the contact time, and of course, the extraction method. My sense is that our ability to detect flavors depends on the exact ratio of all these factors, and we can't simply say that if you want to taste all the flavors you have to brew with a Chemex.
Top

Marshall, is it possible that in their lexicon, "clarity" refers to the physical see-through characteristic as opposed to clear separation of flavor? The additional mention on the chalkboard of "filter porosity" and the several labels lead me to believe that the graphic is a traverse of filtration methods (as indicated from French Press to Chemex) as opposed to cupping characteristics.

Interpretation notwithstanding, the proposed dichotomy that you present is the more interesting of the two. I also can't bring to mind any a priori reason why clarity and body would necessarily be mutually exclusive.

It seems to follow some typical associations, though - roasters that go for a massive flavor-bomb profile would typically select greens suitable for darker roasts and these often bring a heavier body, so these characteristics are commingled though not strictly necessarily so.

One theory would posit that, even when choosing to try, exceptional skill is required to roast in a manner that enables the simultaneous extraction of a bean's wide range of separate-able favors (which is rare enough) with significant weight. And then it also must be carefully brewed to manage this too. It's likely that either or both of these processes will fail to hit the target, not to mention that raw greens able to achieve both objectives are rare. So it's not surprising that this is a needle we don't see threaded very often.
Top

Anvan wrote:Marshall, is it possible that in their lexicon, "clarity" refers to the physical see-through characteristic as opposed to clear separation of flavor?

Anvan wrote:Marshall, is it possible that in their lexicon, "clarity" refers to the physical see-through characteristic as opposed to clear separation of flavor?

First off, their chart refers to brewing methods, not to coffees. It also has errors:
-- Chemex paper has a looser weave than any other filter method and lets through both more oils and more fines than the other paper pour overs (this from the mouth of George Howell personally)
-- Siphon coffee has to be ground very coarse to raw through a fine enough filter to create a clear brew. The resulting taste clarity will be more about under extraction than brew method.

The latter point probably reveals the real "secret" of this chart, underextracting. Chemex paper is faster than drip, so by grinding the same, you will underextract the Chemex slightly. Citing George Howell again, if you don't pull the roast in the second half of the first crack (cupping roasts, the old New England roast, and also how they roast commercially in Scandinavian countries now), you get caramels instead instead of sugars. According to Howell, all caramels (i.e. any roast taste whatsoever) hurt clarity. Since caramels dissolve more slowly than sugars or acids, underextracting is a good way to preserve the clarity of darker roasted coffees.

A final data point, cupped coffees are as "unclear" as French Press; so if cuppers can taste what's up, the particulates are not stopping them. So this chart does not explain how coffees are actually graded.

I think this adds up to different styles of drinking coffee. There is something rather nice getting a Morroccan leather red, sparklingly clear, brew of coffee in a a glass cup. Let it cool down to 130F, the point where there's no more condensation on the inner glass, and enjoy it like a glass of wine.

But to me, if you have the time (which no actual cafe will have), a coarse ground coffee steeped for 4 minutes, then decanted through paper for around 90 seconds longer, will taste much clearer in terms of flavor separation than a faster 3 minute pourover coffee. Obviously both will be equally clear in terms of visibility.
Jim Schulman
Top

Thanks Jim - that makes it sensible to me.

Since one can freely cut off a French-press brew at any time, there seems to be no reason that some clarity enhancement via under-extraction could not be attained using that method - the technique would not be the sole province of paper filters. Visual clarity is a different story, as would be the attendant "body" via the greater proportion of fines remaining in suspension.
Top

Great thread. A lot of food for thought in that chart, and more in the comments.


another_jim wrote:But to me, if you have the time (which no actual cafe will have), a coarse ground coffee steeped for 4 minutes, then decanted through paper for around 90 seconds longer, will taste much clearer in terms of flavor separation than a faster 3 minute pourover coffee. Obviously both will be equally clear in terms of visibility.

This is an experiment even I can manage. My press pots are small, so I'm thinking: 4 minute immersion in 202° water (pouring temp) in a Cafe Solo using a coarse-ground coffee [Guatemala Antigua Finca Santa Clara right now] stirring once early in the cycle (?), then decant through a washed Hario paper filter into a Chemex and serve in 8 or 12 oz double-insulated Bodum glasses. The volume of the Cafe Solo is big enough that I can drink one cup hot, like I would normally, and let an identical cup cool to around 130°. (I heard George Howell recommend drinking coffee at 130°, but I only ever have a sip left in my cup by the time the coffee reaches that temperature range.)

One question comes to mind: My preferred coffee-to-water ratio for filter brewing seems to be 14:1. Should I adjust that for immersion brewing?
LMWDP #420
https://www.flickr.com/photos/21519888@N03/sets
Top

Eastsideloco wrote:One question comes to mind: My preferred coffee-to-water ratio for filter brewing seems to be 14:1. Should I adjust that for immersion brewing?

I don't believe there is any need to needlessly overcomplicate and change ratios. Yes, coarse grinds absorb a little less water than fine grinds; but in both cases, the coffee and water weights are the same.
Jim Schulman
Top
← Back •
By accessing this site, you agree to the site's terms of service. If you need help with the site, please contact us.