Is body the enemy of clarity? - Page 2

Appreciate you putting this into words. I realized this recently, though didnt know this was the reason for it. When I was having trouble with my grinder, the lighter espresso roasts out there, were giving me the most trouble. Coffees where, the split was still light, or just past. But, I could take a dark roast, something with a little to medium oil showing, and not have issues. The shots wouldn't be perfect, but they'd be more then acceptable compared to what the lighter roasts were producing (undrinkable battery acid).

And I know that such coffees can tolerate a little underextraction, but I didnt particularly know why. I actually thought it had to do with the types of flavors you pick up still coming through easily, because they're so bold. Dark Chocolate, Cocoa nibs, Spices, etc etc.

another_jim wrote:Chemex paper has a looser weave than any other filter method and lets through both more oils and more fines than the other paper pour overs (this from the mouth of George Howell personally)
[...]
Chemex paper is faster than drip

My chemex papers are quite slow and also quite thick. I wonder if the thickness wouldn't help compensate for a "looser weave" a la depth filtering. Unfortunately I've been unable to find any tests of this and don't have the equipment/ variety of filters to test.
Top

another_jim wrote:I don't believe there is any need to needlessly overcomplicate and change ratios. Yes, coarse grinds absorb a little less water than fine grinds; but in both cases, the coffee and water weights are the same.

You are correct. There is no need to change the brew ratio.

Is body the enemy of clarity? Not necessarily. Jim Schulman notes: "If you have the time (which no actual cafe will have), a coarse ground coffee steeped for 4 minutes, then decanted through paper for around 90 seconds longer, will taste much clearer in terms of flavor separation than a faster 3 minute pourover coffee. Obviously both will be equally clear in terms of visibility."

The latter will also have far more body than the 3-minute pourover, at least in my ad hoc experiment. I used what was on hand: a Cafe Solo for the 4-minute immersion and a Chemex w/ a washed #2 white Hario filter for the decanting. Both vessels were warmed up in advance. Output is two 10 oz cups, one of which was consumed immediately, while the other was allowed to cool to 130° before drinking.

The result is a big-bodied, easy-drinking cup, retaining the clarity of taste found in paper filtered coffee, as well as stunning visual clarity and color. Jim's color description is apt: "a Morroccan leather red, sparkling clear brew." He recommends: "Let it cool down to 130°, the point when there's no more condensation on the inner glass, and enjoy it like a glass of wine."

Here's the process I used in pictures: 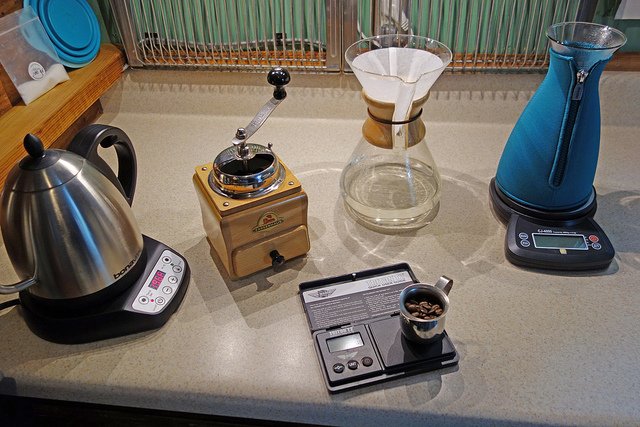 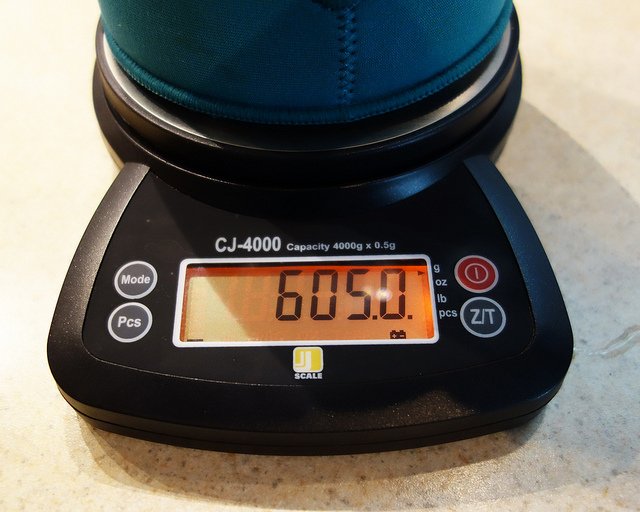 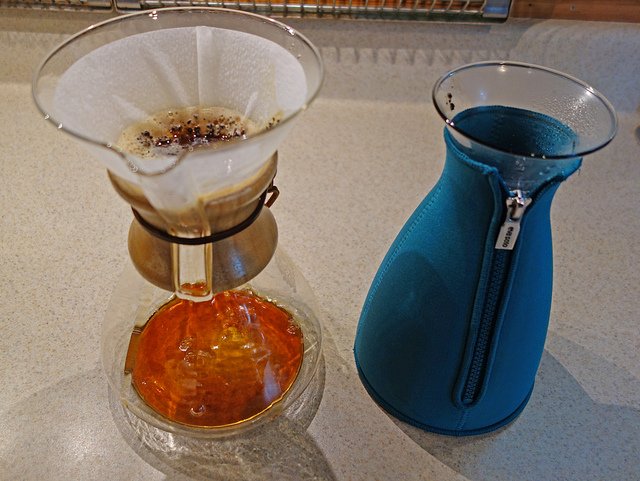 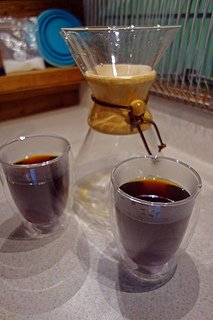 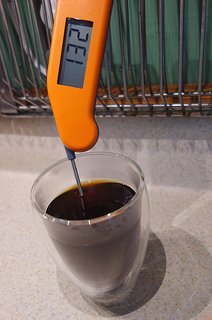 While this was a bigger production than my normal pourover, the bigger body was a noticeable improvement. [My wife, who had no idea what I was up to in the kitchen, thought the coffee was exceptional.] Also, this solves a problem that probably bedevils a lot of Hario V60 users, namely if you get the drawdown time in the recommended range, you're probably also over-extracting somewhat, resulting in a brew that is bitter, at least to some degree. Until this morning, I only suspected my normal routine produced a suboptimal cup. Now I'm sure that I'm getting some unnecessary and unwelcome bitterness, and I'll probably grind coarser for pourover in the future and incorporate an agitation step. Or use some hybrid process like the one described here. Coffee brewed using this immersion/filter hybrid method seems to solve problems associated with over-extraction while avoiding shortcomings associated with under-extraction.

BTW: This is not unlike hybrid brew methods samuellaw has discussed recently:

Thanks for doing this.

There is a lot of innovation going on now in brewing; and I hope it works out into something that can be done in cafes and produce superb brews. I like the coarse grind/steeping methods because they are repeatable and idiot proof; whereas the fine grind/pourover methods are a lot trickier. But these faster methods are mandatory for cafes. I've had superb pourovers (alas, never my own), and I'm sure that skilled brewers can produce optimal cups with any of these methods. Also, I really enjoy the theater some of the brewers make of the pouring.

The danger is a repeat of the Clover debacle from about six years ago (Starbucks unintentionally did the coffee world a service by buying up and burying the company). The incident proved that a single serve brewer can be successful simply because it is easy to use and fast; even though it smudges up everything distinct in the coffee being brewed. The more high end pourover brewing available in cafes, the less likely we are to get a repeat of the Clover; because people will be too experienced to fall for it.
Jim Schulman
Top

I'm curious why you think they (Starbucks) did the world a favor by burying the Clover?

I've had some of the most amazing coffees from a Clover. They're only marginally slower to prepare than a pour over, and arguably, as fast as a siphon, and many others. The intrinsic quality of the brews are significantly better and easily repeatable. I could train a completely unexperienced employee how to weigh out the right dose of a coffee to use on that machine and how to push the buttons to make it work in about 5 minutes. There's gotta be value in that.

Granted, the machines are exorbitantly expensive and difficult to repair when they broke down, but that didn't seem to be part of your comment, unless I'm misunderstanding something?

I'm simply saying, I'd rather have a $4-5 perfectly brewed Clover cup of coffee, than a hit or miss, substandard and inconsistent pour-over for $3. If I or a cafe could easily, and consistently replicate a Clover brew, in a fast enough fashion to make it feasible in a fast paced cafe, then I would. But I'm not aware of any.
Top

I brought up the topic of body vs. clarity about a year ago here. At the time, it was a frustrating point in my roasting progression. At this point in time, I'd argue that body and clarity can both be had given a good coffee, roast, and brew. In fact, clarity of body is what I like about well filtered brew methods like the chemex. I now expect my coffee to have both clean, sharp acidity as well as a dense oily mouth-feel. Of course some coffees will lean towards acidity or to body.
-Marshall Hance
Asheville, NC
Top

TomC wrote:I'm curious why you think they (Starbucks) did the world a favor by burying the Clover?

I've never had anything except flat, unaromatic, and leaden brews from Clover machines; and I tried it at dozens of places. To me, it's as if someone took the spent grounds from somebody else's brewed coffee; and instead of throwing them away, put them in a blender and served them to me with a huge fanfare. It was so bad, that every time I drank a Clover brew, I looked around for the candid camera guy.
Jim Schulman
Top

Wow, that's 11 more than me. Both Ritual locations, one here in SF and the other in the Napa farmers market had one years ago (I'm guessing back in 07 or 08). The 3 or 4 different coffees I had from them were anything but flat. The brews appeared turbid, like the Trifecta brews, and were quite pleasing.

If my memory serves me correctly, this was back when Ritual was really starting to adopt the Scandinavian roasting method in full force, but perhaps didn't have all the kinks worked out. They've sold many coffees that had a deep, unyielding vegetal and broth like savory component (that I absolutely despise), yet one of the coffees I had from the Clover, seemed to sculpt this odd flavor into something more pleasing and interesting.

Your opinions on coffee overall are rightfully well regarded and you've probably tasted more amazing coffees than most of the rest of us combined, but I still have to raise the question of how you seem to think the coffee consuming world at large is better off for not having the Clover, if your only argument is that you didn't like the brews they made? I imagine it's a challenge to be objective, but if you've tried multiple different roasts from multiple different roasters, then, I'd say it's pretty clear that you think the method of extraction is inferior.

I know you'll see this as curiosity rather than debate, you know how much I respect your coffee knowledge.
Top

Saying that it did a better job on poor roasts is not much of an endorsement; a clear brewing method makes bad coffee taste worse, since it reproduces the actual taste without bias.

To me, the Clover had a "signature taste," something roughly like sweetened, toasted whole grains; and no matter what coffee went in, that was the taste that came out. That is the opposite of clarity.
Jim Schulman
Top

Well, my endorsement wasn't simply to say it took a bad roast and made it less disgusting, it was to show how the machine is capable of delivering something unique and delicious, likely when the coffee produced any other way would end up in my kitchen sink or rejected at the cafe. I don't see that as a bad thing.
Top
← Back •
By accessing this site, you agree to the site's terms of service. If you need help with the site, please contact us.