A Visit to the Slayer Factory in Seattle

I had the privilege of attending SCAA again this year, which was a blast. While I spent much of my time at the show volunteering and catching up with friends, Sherman and Tom appear to have run through the showroom floor with their fancy cameras.

I had signed up to tour the Slayer factory on Monday morning after the show ended. So, yesterday I took a wonderful bus ride down to the South side of Seattle to visit Slayer's gorgeous facility. I've posted a Flickr set of my tour photos here, but I thought I would share some annotated selections.

In the studio, we received a brief summary of Slayer's history and an overview of the functionality of the group, using their showroom machine (which happens to be a V2 Slayer). Unfortunately, We didn't get to have any play time since they hadn't unloaded their equipment from the show, and so they had no grinders to use. So we moved onto the factory floor where the machines are assembled and tested. Here we got to see some of their larger components and also a number of machines under construction. 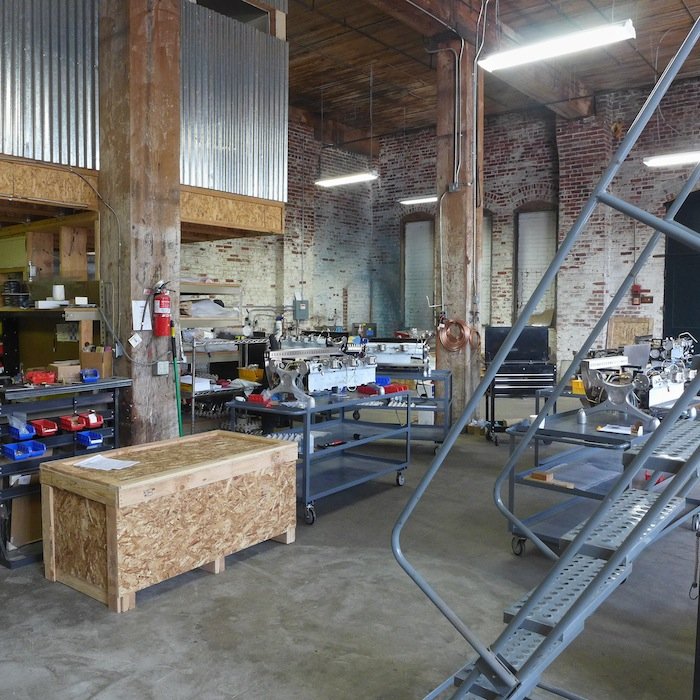 Looking into the factory floor from the studio. 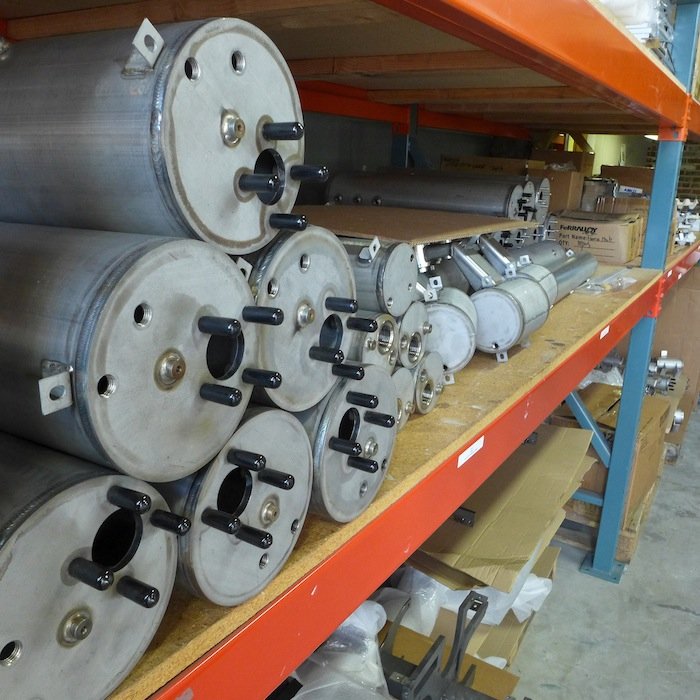 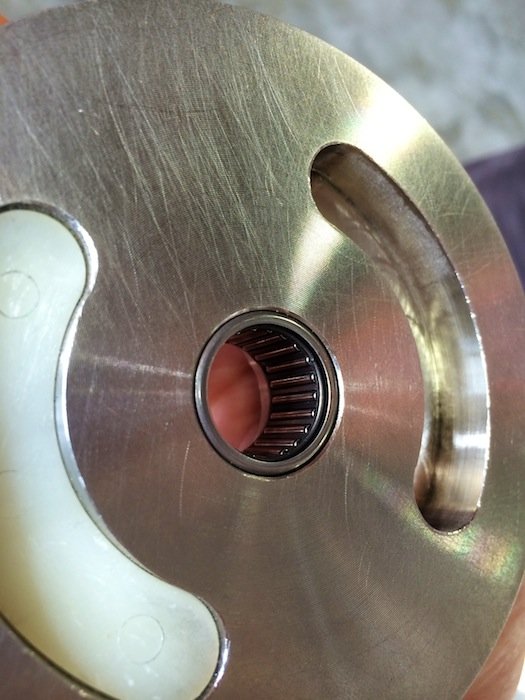 Detail: a ball bearing in the steam actuator. Over the top.

We got to examine their new V3 boilers in detail, which was really interesting. Here are a few details that I hadn't seen before. The boiler has stainless steel tubes welded into the group. Here you can see the pickup tube (left) with a fitting for the machine's 0.7 mm gicleur. The pickup tube connects to the 3-way valve boss on the rear of the group neck. The tube from the right returns the water from the valve to the grouphead. A side view of the 3-way valve boss on the rear of the group neck. Here you can see the port for connecting the pressure gauge on the side.

From there, Chris took us to their parts room, where they showed us a selection of their custom parts, such as actuators and heating elements (which are made of inconel rather than brass, which they claim makes them dramatically more robust against running with the boiler empty). One of the highlights was the needle valve assembly for the V3 group. 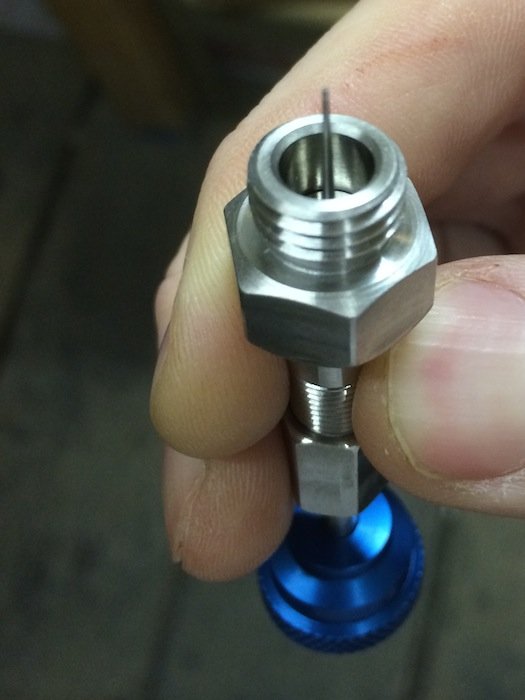 Call me uneducated, but I was kind of surprised that it really was a needle!

After we looked at the parts room, Chris, our tour guide, gave us a look at some multi-group Slayers being built. It's striking how nicely put together these machines are compared to many others I've had the dubious honor of working on. They really do seem to be designed by a technician who expects to have to maintain them. Finally, we got the coup de grâce—a look at 4 or 5 of the single groups they're currently assembling: Note the gicleur installed on the pickup tube—it draws water from almost the absolute top of the group.

The basic layout of the internal parts and plumbing was nearly complete. Also, we got to see the pump mounted in the rear: mounted corner-to-corner on a pair of rubber isolation mounts, with a length of braided hose on the inlet side.

Quite a tour. A lot for me to soak in, to say the least. Chris wrapped up and said we were welcome to hang out for awhile and look around as we pleased, so my friend Jeff and I did that while everyone else left to go back to town.

Which was a good call. Jeff met Benny, their resident welding/machining expert, and seemed to be getting into the finer points of boiler welding technique. Meanwhile, I had returned to more closely examine the set of very incomplete single-group machines on the table in the middle of the factory floor. Devon, another Slayer guy, approached me and we started talking. When I mentioned that I was excited about these because I was expecting mine in about 5-6 weeks, he said, "Oh. You should come check this one out." He walked me over to the back of the room where he was bench testing the very first production machine. It was perched on a few 2X4s and still missing its exterior panels, but the group plumbing and most if not all of the electrical work was complete. Devon was able run the group and show a little bit about setting up the machine and manning the controller interface.

So I got a number of new details about the Slayer 1-Group that I hadn't read before. I posted those details separately in this thread.
Nicholas Lundgaard
Top

Awesome post, and I'm regretting choosing to fly out on Sunday so soon. I left so many places that I wanted to visit in Seattle behind, but the SCAA coverage just consumed all my time. I had a blast meeting you and I'm stoked to hear the tour went well.

I love how Jason designed the needle valve adjustment knob right up top and easy to reach quickly. We've used them for decades in healthcare, as Thorp tubes for flowmeters for oxygen, they are medically precise, so they'd meet any precision needed of them I suppose.

It was really cool seeing your photo's of the inner workings of the Slayer single group. The quality is apparent, and you're going to be thrilled with how easy it is to work on. That paddle, man is it ever sweet to use, but I imagine you've had a fair bit of practice on one somewhere in the Houston area already by now.

Cant wait to read your user review with pics of your customizations!
Top

shadowfax wrote:Note the gicleur installed on the pickup tube—it draws water from almost the absolute top of the group.

Which should mean that the group will self bleed the same way that Kees' saturated groups do? I can't understand why LM chose to bury the gicleur in the tunnel on the GS3 which requires manually bleeding the group with a screw. Even better would be removing the gicleur completely from the group eliminating the need to remove & descale the gicleur every 3/6/12 months depending on your water.

Considering all the nice features they've incorporated I'm surprised that they chose to go with vacuum & pressure valves with no drain line attachment barbs. An easy owner fix but I'd expect to see those valves plumbed into the drain system on a machine in this class.
LMWDP 267
Top

JohnB. wrote:Which should mean that the group will self bleed the same way that Kees' saturated groups do?

You're half-right. As you say, drawing from the top does more or less completely bleed the group, but in addition to that, there is a detail that I forgot to mention. The 1-group Slayer actually has an "autobleed" function that you can activate through the programming interface. It kicks the pump into full high gear with no solenoids open. There is a tube on the very top of the group cap that runs out to the OPV, and this action shoots all the trapped air out of that tube. It's pretty cool to watch—really nice idea. 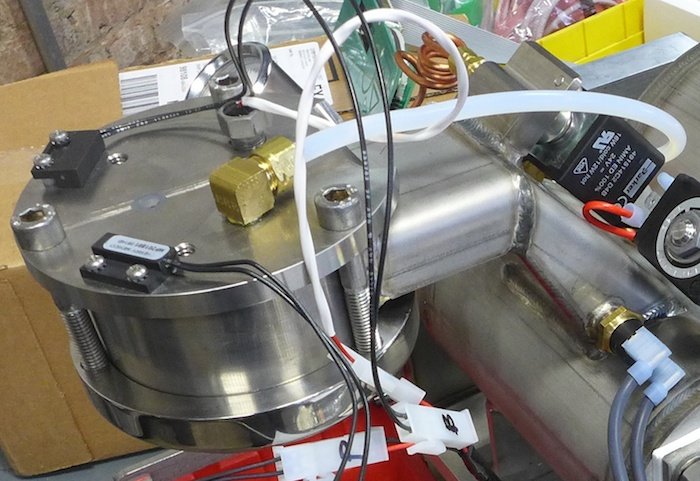 The brass fitting with the teflon tube is routed to the OPV. The OPV is on the lower-left here. Easily adjustable with an allen wrench.


JohnB. wrote:I can't understand why LM chose to bury the gicleur in the tunnel on the GS3 which requires manually bleeding the group with a screw. Even better would be removing the gicleur completely from the group eliminating the need to remove & descale the gicleur every 3/6/12 months depending on your water.

I know why LM puts the pickup where they do—because it's the most thermally stable place in the group, and that's where they want to draw from. That explains why the pickup tube is there at least. I agree it would be nice if they put the flow restrictor upstream of the boiler, but you can't do that on a multigroup machine with a single boiler, so I would guess that's the historical reason why they haven't.

On the plus side for the Slayer, the brew boiler inside is nearly 100% 314 stainless steel/inconel (including the heating element), so there is much less concern for anything weird like the apparent galvanic corrosion we've seen on some GS3s. It's also 0.7mm vs. 0.6 mm, so there should be less of an issue with it clogging up on that count too. We'll see!


JohnB. wrote:Considering all the nice features they've incorporated I'm surprised that they chose to go with vacuum & pressure valves with no drain line attachment barbs. An easy owner fix but I'd expect to see those valves plumbed into the drain system on a machine in this class.

Agreed on this point. I wish they had connected the vacuum breaker valve in particular to the drain.
Nicholas Lundgaard
Top
← Back
By accessing this site, you agree to the site's terms of service. If you need help with the site, please contact us.