Next week I'm off to Milan for HOST, as well as a little cavorting around Italy. Given that some brands have product releases at this show, while others have a larger booth or more on offer than other shows like the SCA Expo*, I thought I'd make a post to talk about what I'm planning to see as well as solicit suggestions for what people might also want to take a look at. I'm at the show for three days, which is a ton of time to see it all - I can easily hit all my desired contacts on day one, so I have plenty of room to roam and check out other things (e.g. finding the best pizza to nibble

I will have a camera with me, so I'll be able to shoot plenty of photos. I'll also have an audio recorder and lapel mic, so while I can't quite promise anything good, I might be able to get some video as well. Trade shows are loud, of course, and my personal equipment isn't quite as nice as the stuff we usually use. As I said, I've already got a list of things to cover for Prima, and photos and videos will be posted on our blog and Youtube channel, plus social media. Anything else I'm happy to post here, so feel free to let me know what you'd like to see!

I'm not sure how many H-Bers are around in Milan, but if you'd like to meet up at all just let me know! My priority during HOST is to be at the show, but I can try to carve out some time here and there. Also, if anybody should actually like to attend this, I have a free two-day visitor badge I can give out.

Sanremo
By now many of us have seen the Opera and Cafe Racer, but they're teasing a new grinder launch as well. Two years ago they had a product on display called the Revolution, and this year they're talking about the Revo - presumably it's the same product. They promised to revolutionize batch grinding back then, with a triple hopper, custom blending, micrometric grind adjustment, etc, but their prototype in 2015 was more simplified. I'm looking forward to seeing what they've got this time around.

Nuova Simonelli
The Mythos 2 is the big ticket item this year. I'm hoping to catch a video interview for this one if possible. Colin Harmon told me he'd be at their booth, and I expect that means he's been involved in the Mythos project again and could give some great info on what's new and what their process has been like.

La Marzocco
LM is holding a release party next Saturday for the Leva, formerly La Curva. This was a lever-actuated, spring-cocked prototype machine that appeared at their Out of the Box event two years ago, which is supposedly refined now and looking at release. I don't actually know much about it, but the LM guys that came to the Louisville Coffee Champs Prelims seemed excited about it. I'll also be visiting the factory this year, and I'll be stopping by their booth to see what machines they've got on hand.

Home Machines
I don't have anything specific in mind here, but there do appear to be a lot of home espresso brands exhibiting this year. I've spotted Izzo, Quick Mill, Rocket, and more on the list. My plan was to peruse what was out there, but if anybody has specific suggestions this is an area where I'd gladly take them.

Grinders
Mahlkonig and Mazzer had prototypes to show off last time at HOST, so I'll be swinging by again to see what they've got. Both showed off grind-by-weight last time, but neither has released a product yet. The EK43 Barista never seemed to get going either. I'll also be browsing other booths for anything new or innovative. I'm not certain if Etzinger will be exhibiting, but if so I'd love to check out that EtzMax.

Barista Hustle?
I've been asked to go meet up with Michael from BH, so I'm assuming one or two of them might be attending the show. I'd love to talk to them about the pitchers, their ongoing distribution tool testing, and so on. Related: Eversys might be around, I could go see what all the fuss is about!

Milan Coffee Tour
Last time I came to town, the only notable specialty coffee shop anybody could recommend was Taglio. It was a great little spot, and overall decent, but I was wanting for more options. This time it seems there's been more growth in the city, so I'll be visiting 6-7 cafes that focus a little more on the third wave approach rather than traditional Italian espresso. The list currently includes Taglio, Orsonero, Pave, Moleskine Cafe, Nicol, and Cofficina. I'm not entirely sure if it's a cafe or a shop, but somebody also recommended Sevengrams to me. Expect a blog post out of this.

* Interesting note: The Washington State Convention Center (SCA Expo) has 205k sq ft of exhibit space. Fieramilano (HOST) has over 3 million! The booths tend to be bigger and more spread out. Each of HOST's 8 pavilions is like an Expo-and-a-half-sized room, so thankfully coffee stuff is only in about 3 of them. It's a LOT of walking.
Prima Coffee
888-837-7892
4603 Poplar Level Rd
Louisville, KY 40213
http://prima-coffee.com
Top

I will be watching this thread closely!

Thanks for helping those of us that can't be there!
Top

It sounds like a fun trip. I am looking forward to your further reports.

Steve, I'd definitely be interested in learning more about the EtzMax grinder. Would be fantastic to see some video of it in action.

Hey Steve, I'd love to hear more info on the new Compak grinders. They are apparently releasing new grind by weight models this fall, but there is almost no info on them. The PKR series a couple years ago had features like an air purge to clear out retention and was an electronic version of the R100. I'm wondering if this is still the case, and what the exact North American release date is.
Top

keno wrote:Steve, I'd definitely be interested in learning more about the EtzMax grinder.

As far as I read in the german kaffee-netz etzmax unfortunately will non exhibit on the HOST at Milan:

We won't attend HOST (at least not as exhibitors) .. if you are interested in being among the first to receive an etzMAX-medium, we'll keep you posted though.

I'll be there on Saturday and/or Sunday, haven't decided yet...
Have a nice evening
blu
Top

So cool that you are there for this big event, I am interested about the Mahlkonig news, does the EK 43 S is going to replace Barista model or the EK 43 barista model still under development ? Thanks for help to clarify it. Will keep eyes on this thread

It's halfway through Day 1, and I've already got a good deal of booths under my belt.

Ceado
I hadn't heard about anything new before the show, but they had two prototypes on display. One was a grind by weight concept that worked much as you'd imagine. Theirs is a standalone scale unit that connects to the grinder electronics, and they said is was consistent to the tenth of a gram. Also on display was the E37Z, a new angled single dose grinder that comes configured for espresso or filter (worm gear adjustment for the former). It has 83 mm flat burrs coated with what they call Diamond Like Carbon, DLC. Inside are also 6 screws for adjusting burr alignment. Retention was supposed to be around 0.1 gram as well. The one they had working was hooked up to a control box with a dial for adjusting rpm, but it didn't get put to use that I saw. 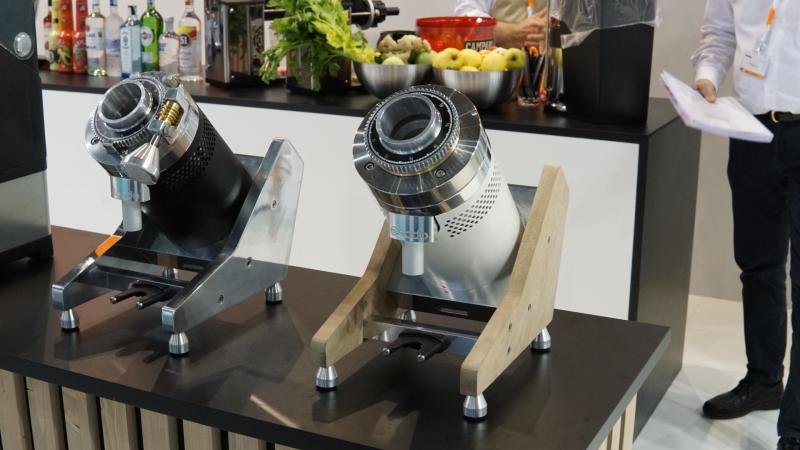 Mythos 2
Might be the first commercial grind by weight grinder to hit the market. I haven't had a chance to get a full run down yet, but obvious features are a touchscreen display, scale integrated into the portafilter hooks, and what looked to be Clima Pro tech. I did note that a barista had trouble with the scale when the workbench was being bumped, so vibration may be an issue when weighing. This was a critique I had of Mahlkonig's concept in 2015 - cafe bars are not usually vibration isolated, so if the scale has issues with people bumping the counter, tapping a milk pitcher, etc, then you may as well leave it out. I intend to ask NS later about this to see if they're working to correct it. Also, while the orange is the color most prominently on display, it's not the only color they have. I spotted a white one in another part of the booth. 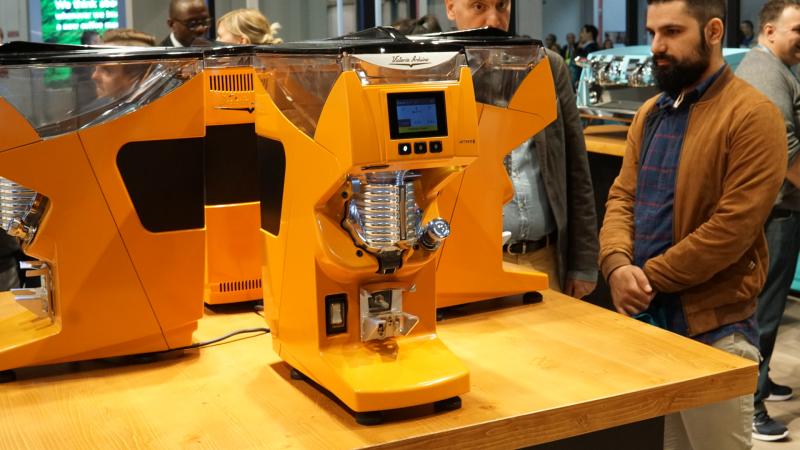 Nice reporting, keep the information coming for those of us who could not attend.

Big news for me is from Ceado as it signifies an acceptance by a major manufacturer that there is a market for extremely low retention grinders built at a commercial level. The addition of weight grinding to 0.1 gram just brings it up a notch above what's similar on the market.
The addition of weight grinding means that a small funnel can be added. One touch grinding to a set amount with extremely low retention is ideal.
Between order and chaos there is espresso.
Semper discens.


Rob
LMWDP #549
Top
← Back •
By accessing this site, you agree to the site's terms of service.