Last Friday we had lots of out-of-town visitors join us, including HB's own Nicholas Lundgaard (shadowfax). He and David Buehrer from Greenway Coffee & Tea were attending a training course in Greensboro and brought their latest toy: 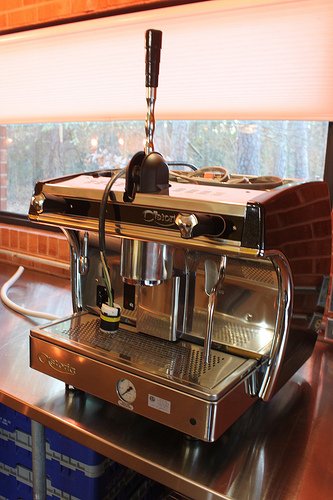 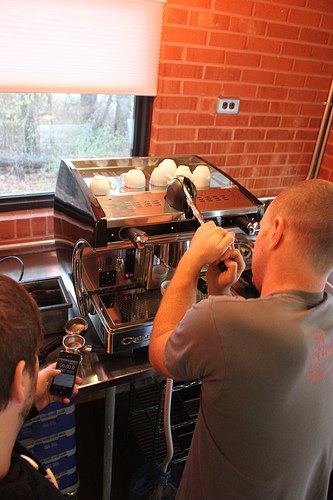 Nicholas and David were really geeking out with the Scace thermofilter. Nicholas commented that the peak brew temperature measurements were higher than expected given how well it pulls. 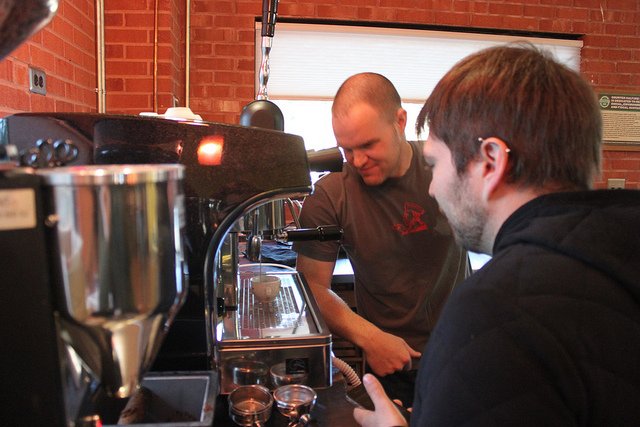 I've noticed the same thing with "high peak" levers that draw water directly from the boiler, i.e., a thermofilter will show a spike, but it's immediately followed by a precipitous fall. Evidently it works (the truly curious can refer to my writeup of similar findings in Ponte Vecchio Lusso brew temperature tests).

Thanks to Nicholas and David for the demonstration and as always, Nathan Brown from Counter Culture Coffee for the photos. The full album is located here. 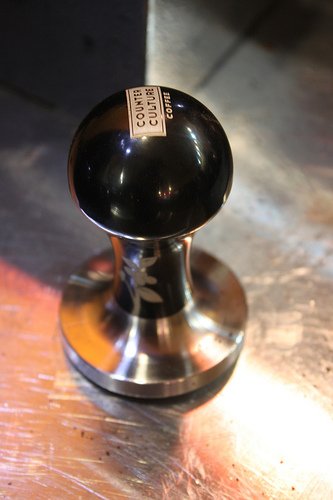 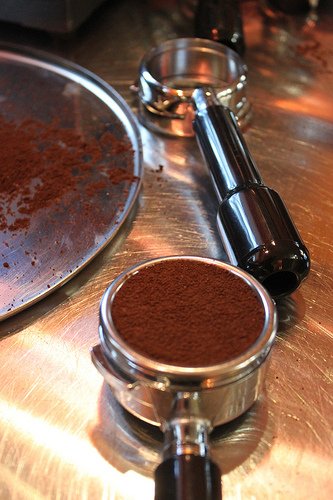 Thanks for the writeup, Dan! For our part, We had a lot easier time with the lever machine the days before taking it to the cupping lab, using coffee from Greenway Coffee & Tea (a Guatemalan SO and a Nicaraguan SO, bot very lightly roasted). For whatever reason, we couldn't dial in CCC's Finca Mauritania into something that worked nearly as well on the lever machine. The oddest thing for me was that using either Greenway coffee, the shot could easily be pulled to a normale (17-18g in, 30-35g out) with a single pull, holding the lever down for about 3-5 seconds. With the Mauritania, we had to hold for 15-18 seconds or double pull, neither of which was working well in terms of dialing in a balanced shot. When we finally switched to the Nicaraguan, we'd waited too long and most of the guests were gone. Alas, strike down another little shootout/demo for not going as planned. Definitely a lesson to prepare with the coffee you plan to demo with!

That lever is coming back to us in Houston soon, though, along with a wide range of coffees for us to delve into and really play around with. I'm looking forward to that a lot!

It was great to meet all the Durham coffee people. Quite a group! And what an amazing lab to get to be at every week. Counter Culture has you guys absolutely spoiled rotten.
Nicholas Lundgaard
Top

Long time regulars know the dosing proclivities of many Counter Culture employees, i.e., their mantra is "There's no such thing as too much coffee" when it comes to the La Marzoccos. That's why I was surprised to hear Tim describe his workaround for a nearly undrinkable Kenyan coffee as single origin espresso (Karatu). He's a serious shotmaster: 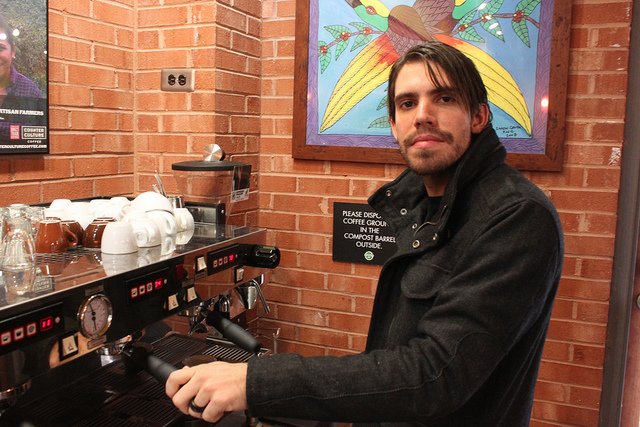 I like bright coffees, but woah! When he first pulled it per his usual routine, it was 1000W brightness. Tim switched to a low dose, higher temperature, and ultra long preinfusion: 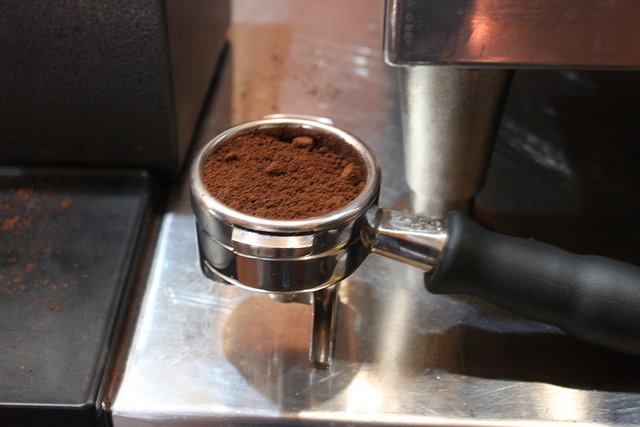 Normally this would be the mid-dose at Counter Culture

It was surprisingly tame profile of grapefruit, cranberry, and nougat (brew parameters were 15 grams, 1.25 ounces, 202 degrees). This revelation prompted a discussion of ideal basket dose and headspace: 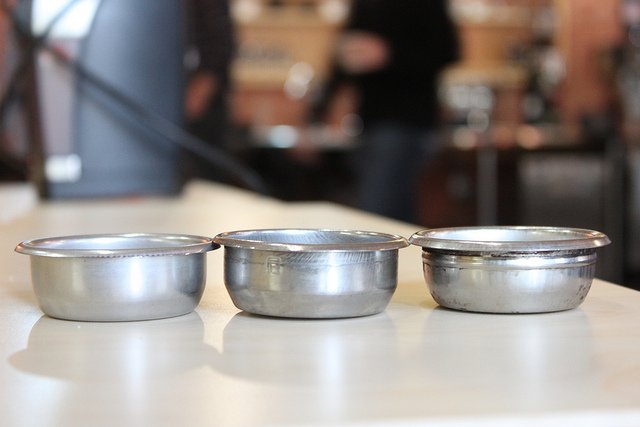 Depending on what manufacturer you ask, these are 14 gram baskets

I took some of the same coffee home and duplicated his recipe. In fact, based on our discussion of ideal basket dose, I dug out an old (unused) strict 14 gram basket. Dosing a mere 12 grams and 2°F hotter than usual captured the fruitiness without the harsh acidity. Who knew!?

Thanks Tim for the barista technique lesson and Nathan for taking photos! The full album is here.
Dan Kehn
Top

For this past Friday's writeup, see Izzo Alex Duetto vs. La Spaziale Vivaldi vs. La Marzocco Strada. Stay tuned for next week's location (it may moved to New World Cafe since Counter Culture's espresso lab will be closed on December 23rd).
Dan Kehn
Top

Tell them to move it to Philly.

Dan,
Thanks for having us out, it was a pleasure spending at least a little time with you! Hope to see you and the home barista community nationally more often this year!

Wow, it has been over a month since I last reported! The holidays have passed and we're still getting together every Friday. This past week, we were joined by one of my colleagues from work, Barry Beggs: 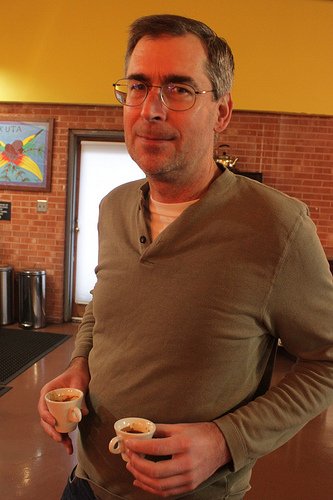 I'm known as the "coffee guy" at work, so naturally Barry asked for recommendations when he went shopping for a coffee grinder. Based on his budget and use, he decided on the Baratza Maestro. In the photo above, Barry has just finished off two rounds of double espressos. I had him pegged for a cappuccino guy, but he surprised me by drinking them straight. He did waver a bit on the fourth round, evidently worried about caffeine overload. Wimp.

The gloved one is Tim from Counter Culture Coffee: 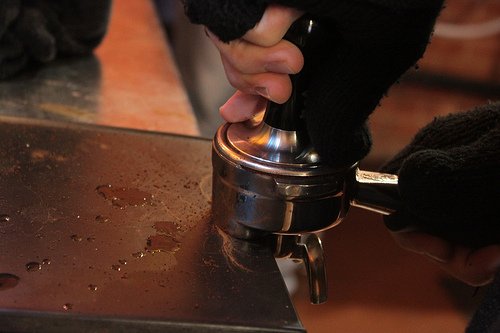 While some employees there are updose fans, Tim is quite open-minded when it comes to dosing technique. Last Friday he handed me an espresso and asked what I thought was different about it. Given the low to medium body and light fruit profile, I figured it was another "how low can you go?" experiment (it was).

I don't know what Ian and Bob are chatting about in this chalk talk, but I'll guess it's about boilers: 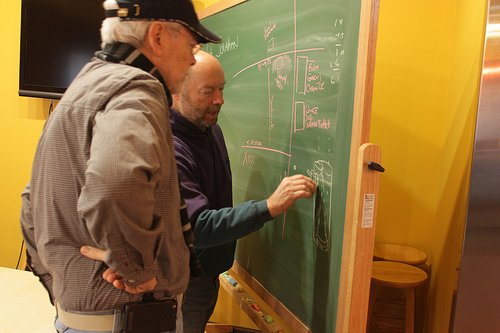 Thanks Nathan for taking photos; the rest of the set is in this album. Not sure what's on tap this week, but if you live in the Triangle area, you're welcome to join us! Based on the Counter Culture tweek about Apollo 7.0, it's a safe bet that we'll be sampling the new version next Friday!

Did you have a chance to pull some Baroida? It's my favorite right now!
Top

Yes! We did enjoy some Baroida week before last; it's a nice fruit chocolate espresso.

Last Friday was a good reminder not to trust digital readouts. Even though each of the three groups on the La Marzcocco Strada claimed the same setting, one was off by 4°F. I took the opportunity to reset the offset so the displayed readings were closer to reality. Then I tried my hand at making Americanos with nice looking crema: 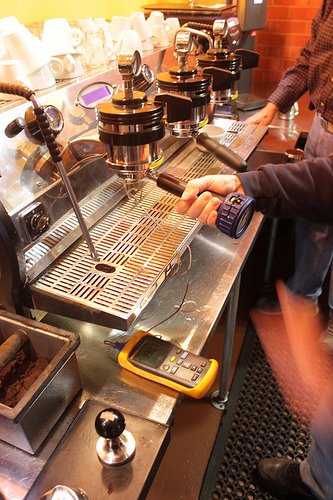 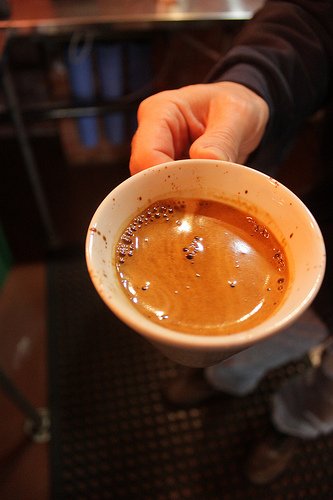 I prefer to pour water along the side under the espresso to fill to volume instead of pouring the espresso on top of a cup of water. The Americano was at the request of Winston (left); he had just returned from an extended stay overseas. Rob's daughter (right) joined us for the first time: 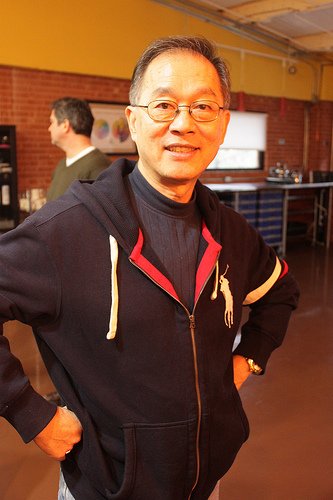 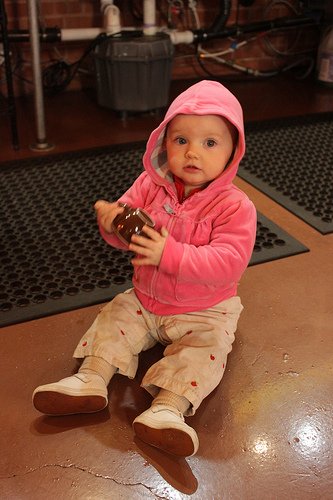 To wrap up the session, I demonstrated "poor man's pressure profiling" on the Strada MP. That's where you carefully position the paddle on the crossover point between the valve opening/closing (sort of like a big needle valve). It's imprecise, but with practice, it's not hard to reproduce a slow ramp to 9 bar followed by a trailing off to 6 bar, similar to a lever espresso machine. 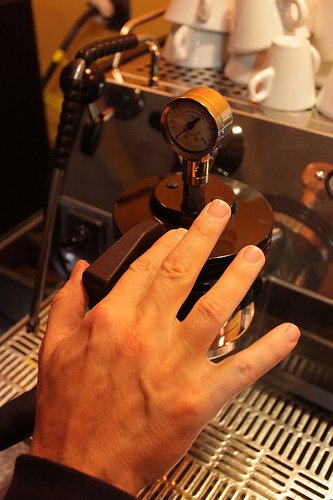 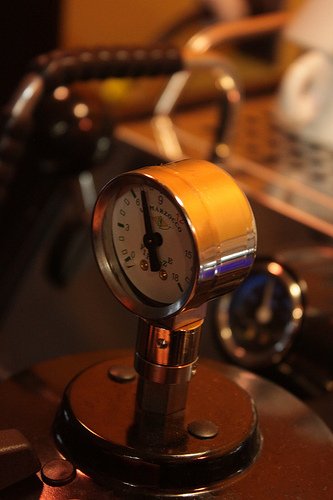 Tomorrow is Apollo 7.0. If you're in the Triangle area, come join us!

PS: The full album for last week's gathering is here. Thanks Nathan for the photos!
Dan Kehn
Top
← Back •
By accessing this site, you agree to the site's terms of service. If you need help with the site, please contact us.