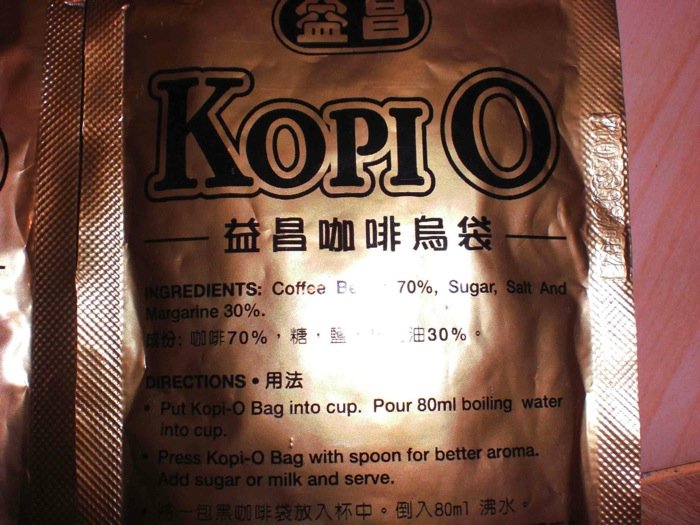 There is a rapidly growing chain of coffee shops in Taiwan that has expanded to China. They are headed towards being publicly held and might be the only one that may have a hope of taking a bite out of the big green dot.

Anyway, they are called Cafe 85 and you can find them in smaller towns allowing you to not have to drink Nescafe instant with cream and sugar already installed. Cafe 85 coffee is not bad when you are immersed in the bleak landscape of Asian coffee.

I joke with the a guy that knows about this stuff that they must have a incredibly special blend that really needs to be brewed at 85 degrees. The liability law in Taiwan is not strong enough to have it be related to serving overly hot coffee.

Anyway, they have my favorite drink to offer to new co-workers without having tried it: Sea Salt Coffee. 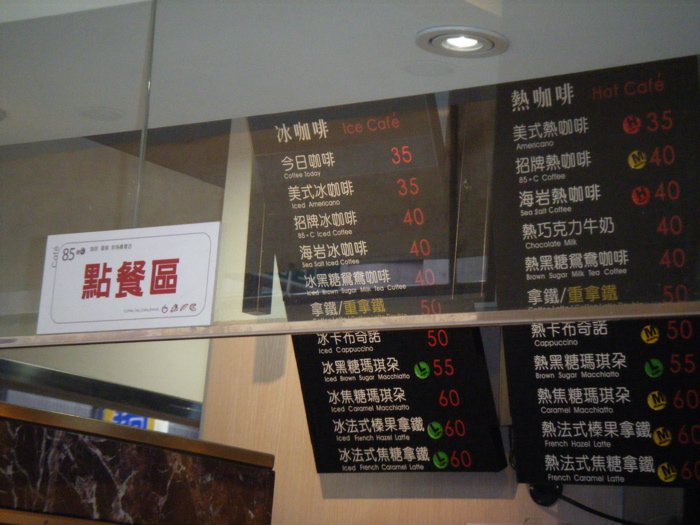 85°C is everywhere in Taiwan. They've expanded with a speed that has pretty much strangled the competition. Starbucks is the only other franchise that can compete with them. There is another one called Barista Coffee, but I don't see it around too much. Starbucks is more focused on sit-down coffee and decent food items, where 85°C is more focused on take-out coffee and extremely sweet layer cakes.

I haven't tried their Sea Salt Coffee, but their iced cappuccinos are refreshing in the summer. I avoid their Americanos and Coffee-of-the-Day. Like Starbucks, I think they're doing a good job of getting people interested in coffee who may not otherwise have had much opportunity, and they're doing an okay job. However, unlike Starbucks--and many third-wave coffee shops for that matter--85°C offers their Italian-style coffee at a price that approximates its inherent value.

They're not my first choice for a place to go, but I will pick up an iced cappuccino if my preferred options are not available.
Espresso shrine--> https://www.home-barista.com/forums/vie ... p?p=256899
Top

Are you familiar with Taipei? I am desperately looking for a good coffee shop here!
Top

This was my experience in Taipei. Just returned from Taiwan two days ago.

The first place was Lapres midi, just across the street from Formosa Regent Four Seasons (highly recommended place to stay) in Chung Shan District. The barista was practicing for the Taiwan Barista Championship next week, so I got lucky and tried three drinks from the competitor. He made the two different normale's at two different temperatures, followed by a cappuccino. The blend had dried processed beans and tasted strawberry. 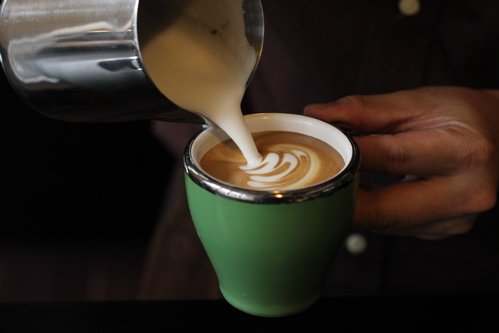 After Lapres midi, at the barista's recommendation, we walked about ten minutes to Coffee Sweet, which is hidden inside a small urban park. Coffee Sweet has quite some character. On the menu, it was recommended for the patron to go elsewhere if coffee is not to her/his taste, kinda like the soup nazi episode in Seinfeld. The Beloya beans are roasted literally to the middle of first crack. We tried the syphon first. The owner/barista measured the beans AND water on the gram scale. A thermometer was placed into the top globe of the syphon. He used what appears to be alcohol as fuel source. The beans are finally ground on a Mazzer Robur.

After the syphon, I tried an espresso. He took a small single serve of individually packed beans, adjusted the grinder, and made the drink on a Synesso. Again, because the beans are roasted to middle of first crack, so the crema appears light colored, but it was one delicious drink! It had body, fruitiness, and nice acidity, but no astringency. 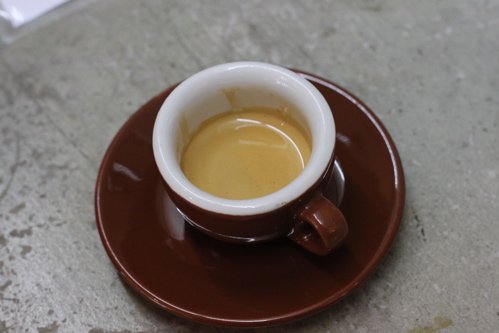 While we were walking to Bella Taiwan, to satiate my espresso urge, we randomly walked into Barista Coffee on the busy Chung Shiao East Road near Sogo. I had a nice espresso, probably roasted a little dark, but still yummy. 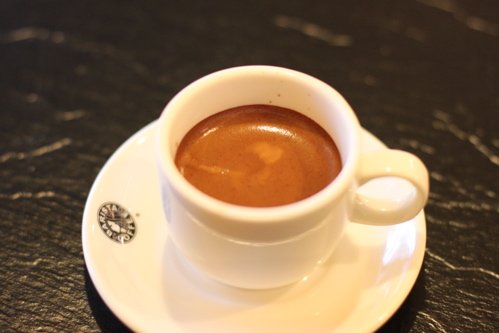 This is the door handle at Barista Coffee: 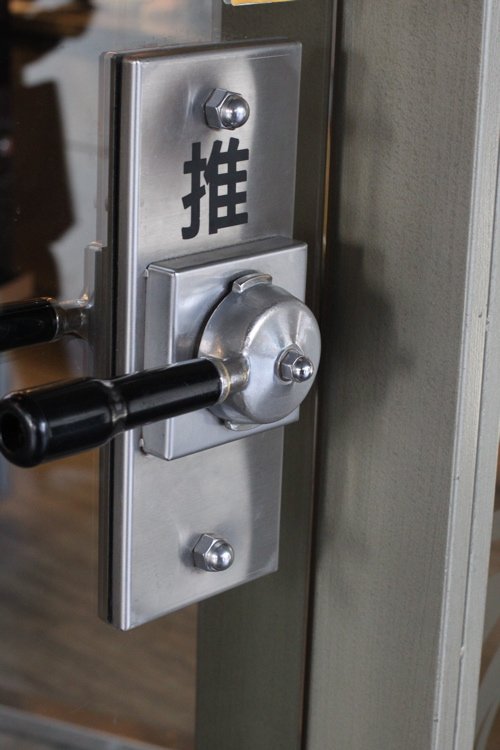 The last day we went to Gabee, where the owner had won the first two Taiwan Barista Championship. The barista that day was last year's champion. It was a busy afternoon, so he did not have time to chat until it quieted down. The drink was made on a Dalla Corte. The cafe was very trendy and decorated nicely. Too bad I did not bring my wide angle lens. 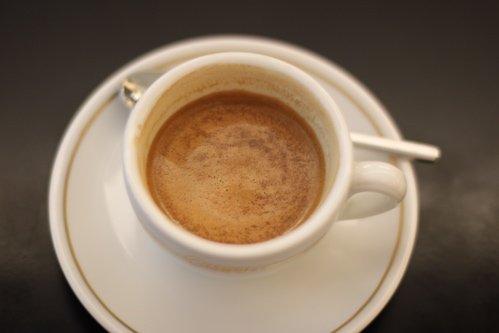 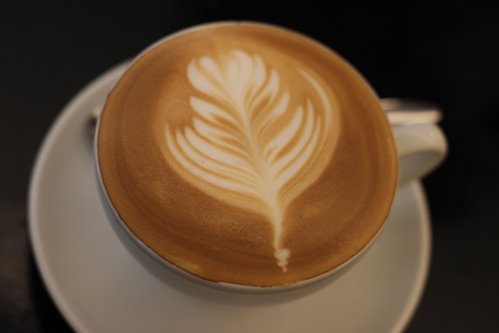 For the previously mentioned Fong Da in WSJ, it is located in the Ximen District, a shopping and hang out district like Ginza in Tokyo. It is one of the first cafe's in Taipei. In its early days, it was a popular gathering place for local writers and artists. It's a good place to have an espresso after walking and shopping. 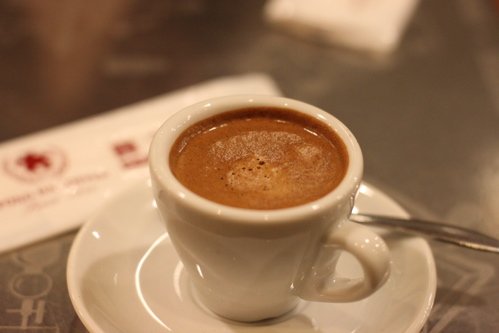