Unfortunately I didn't have time to do any research before I left here and while I was there I didn't feel like looking stuff up so I relied on my friend Stephanie for coffee and beer places. We hit three good to great coffee places in Barcelona. All the rest of the coffee I occasionally tried at cafes was pretty disgusting, they all were poorly pulled espressos or Americanos. I ended up buying beans at two of the places below and just brewing them on our apartment's drip coffee maker, which was still far far far better than the alternatives.

Oh, I'm apprehensive about writing this because tomc's and other's cafe posts here are so amazing.

1st stop was Nomad, I immediately realized that it was excellent, and it remained the best of the three. I picked up some Kochere there for the apartment that was very similar to the Kochere I'd roasted recently. And the shot I had was superb, on par with anything I've had here in LA. Jordi was quite busy so I didn't have much of a chance to talk to him. From what I understand his cafe isn't permitted so he opens it for a few hours each day as a coffee training lab. 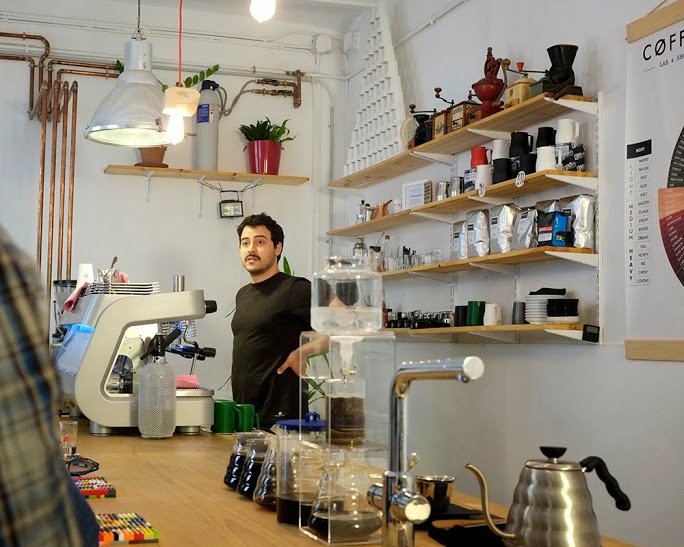 A few days later was our second stop, and my favorite spot of the three because the proprietor Ana was so sweet and energetic. Her place is Onna Cafe and it's in a shared small business incubator space, she even has two beer taps one of which had a summer session ale from the American craft brewery in the building, Edge Brewing.

Unfortunately I was so busy talking to Ana that I never took any pictures so to get a feel of her place you'll have to Google Onna Cafe. She's roasting on a 2kg Solar Roaster and since she's from Costa Rica she's currently only using CR beans, importing greens and selling throughout the EU. In fact, it turns out Jordi from Nomad had picked up a bag of greens just minutes before we arrived. This was towards the end of our two weeks so I bought a small bag of a natural that was her favorite. Where Jordi's roast of the Kochere was no more than city plus Ana's roast of the Finca Santa Lucia natural was a solid FC, getting close to FC plus. Still sweet but a little more roasty than I prefer.

But as I said, Onna would definitely be the place I would hang out the most considering the cool space and Ana's ebullient personality. Ana even sent me home with 300 grams of the green CR Finca Santa Lucia natural, which visually is a very well processed natural. I'll update this thread when I roast it.

Our final stop was a few days later in the same neighborhood as Onna. Unfortunately we got to Skye just before closing so I didn't have much of a chance to talk to them. I didn't note their names down, and can't find their card, but Skye is operated by a British woman and a guy from North Carolina. They were trying to re-dial in a Rwanda Buf Nyarusiza from the Nyamagabe district roasted by Right Side Coffee Roasters, the first shot I had was a bit underextracted but they tightened the grind for the second one and it was quite tasty, dark chocolate with orange. And their shop is in a permanently parked vintage Citroen delivery van: 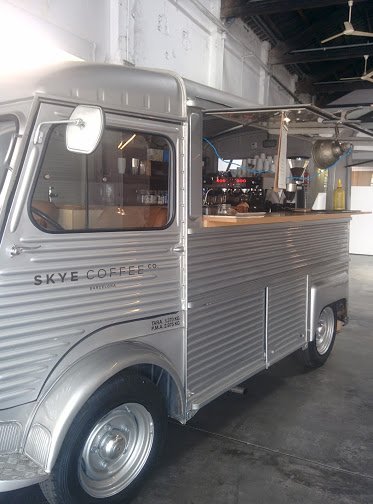 I won't bore you too much with beer but I had 4 favorite craft beer places in Barcelona, in order of preference:

Homo Sibaris (the only one of the 4 with outdoor seating, jumped from 2nd to first after my second visit because of the outdoor seating and the fact that they had Cantillon's Rose de Gambrinus on tap in advance of a lambic fest, and they had the cheapest Cantillon prices by 10 euro a bottle!)

Ale n Hop (I had the best beer of my trip, possibly ever, there, HORALs Oude Gueuze Mega Blend)

BierCab (one of the top craft beer places in the world, just a little too crowded and pricey for me)

La Cerveteca (closest to our apartment, delightfully funky, but the taps weren't that great the times we visited them)

Oh oh oh, and I spied a Presso at Ale n Hop, I totally forgot to ask them about it. 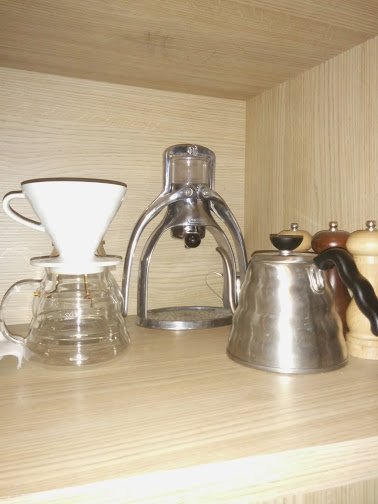 "A screaming comes across the sky..." - Thomas Pynchon
Top

My wife went hiking with girlfriends in the Spanish Pyrenees in April. Since she flew in and out of Barcelona, she scheduled a few days there on the back end of the hike. While I was happy to hold down the fort in her absence, I was a little jealous of her time in Barcelona. All of my friends who have spent some time in the Spain seem to favor Barcelona over other big Spanish cities.
LMWDP #420
https://www.flickr.com/photos/21519888@N03/sets
Top

It's the first vacation in my 30+ adult years where I didn't want to come home. The only things I missed were Mexican food and my cats. Otherwise, I loved it there.
"A screaming comes across the sky..." - Thomas Pynchon
Top

Great report! My girlfriend-soon to be fiancé have been talking about going there sometime next year. It sucks to hear how expensive the beer is! 10 Euro is cheap for a pint? Yikes

Eastsideloco wrote:I was a little jealous of her time in Barcelona. All of my friends who have spent some time in the Spain seem to favor Barcelona over other big Spanish cities.

Barcelona is WONDERFUL! I lived in Sevilla for a year but traveled up to Barcelona every chance I got. I have always wanted to return and spend more time there.
"Nobody loves your coffee more than you do."
~James Freeman, Blue Bottle
Top

TomC wrote:Great report! My girlfriend-soon to be fiancé have been talking about going there sometime next year. It sucks to hear how expensive the beer is! 10 Euro is cheap for a pint? Yikes

When you go there will probably be even more great coffee and I highly recommend you visiting Barcelona.

Pickpocketing is on the rise again, though. Of the 6 of us our friend Maik did have his wallet lifted.
"A screaming comes across the sky..." - Thomas Pynchon
Top

Greg, did you also tried out "El Magnifico" ?
I liked it a lot, that was about three years ago ...
Top
← Back
By accessing this site, you agree to the site's terms of service. If you need help with the site, please contact us.