Turn your French press into a French pull

I am living in a temporary apartment while my house is finished up. All my espresso gear is in storage except for my Cimbali Max and press pot. The one problem I have had with a press is that the coffee always has a bitter twang ala over extracted. I have changed grind, steep, temperature and it has been reduced but it is still there.

A few months ago there was a thread about skimming the grounds out of the press before you actually press the coffee. I have been doing that, and it made a marked improvement in the cup but there was still that slight bitter twang. I do not like bitter in my coffee. I refrained from drinking coffee just because I found it bitter. Then one day I visited Metropolis in Chicago on a business trip and my eyes were open to what coffee should be like.

Well back to my point. Skimming the grounds from the press prior to pressing did cut the bitter substantially but it is just tiresome to get a couple of spoons and skim the coffee out. So a few days ago I had the idea of reversing the press. Instead of putting the coffee in, then the water, then the press I reversed it. I put in the press, put the coffee on top of the press which is half way down the glass so I can move the lid off to the side. Then I pour my water onto the coffee and push the press down. That way the grounds are floating above the screen. Give it the summary stir, or rather swirl in my case, then raise the press. That collects all the coffee on top of the screen and I discard it into the sink. Then I rinse the press under some hot water, put it back in and press it to the bottom to catch any lingering grit.

The results have been wonderful. I get a very clean and bitter free cup of coffee but with the body of a press pot. Now I still get the press pot sludge in the bottom of the cup, but that has never bothered me. It may sound more complicated then simply skimming the ground off the top but it is not, and it is faster. You just load the top of the press with the coffee, fill with water and steep then pull the entire ting out, grinds and all. You could even skip putting the press back in but I still do. Give it try, you may like the coffee even better.
Dave Stephens
Top

Sounds a lot like the function of the Trudeau Tirra Coffee Press. Glad to hear it works so well, may have to try this myself, thanks Dave.
Tim Eggers
http://www.facebook.com/TimEggers
LMWDP #202
Top

Sounds interesting, Dave. Might have to dust-off my press in the morning and give it a try. My press has been collecting dust ever since I got a vacpot, so im very open to anything which will bring it back to life.
Artisan Micro Roaster, Peekskill NY
www.BigBangCoffeeRoasters.com
Top

Damn, I wish I'd thought of that!

I've been slamming the pressing part of French Presses for a few yeas now, but never thought of doing this. You could even let the grounds just float, without stirring, like when cupping, and probably do even better.
Jim Schulman
Top

Thanks Dave (if I may) for posting about this - if I may add some of my own mini-findings for any thoughts you may have with a similar method! I've been doing this method off and on for about three months now.

After being without my espresso machine for so long i also began to play with my FPs. There were two things that contributed to some necessary mods.

1) I was getting some 'stale' tastes (after cleaning grinder etc.)
2) I wanted an easier way of doing the Wendleboe/Hoffman technique like Dave.

So I slightly modified my two Bodum double walled FPs to be without the lids: 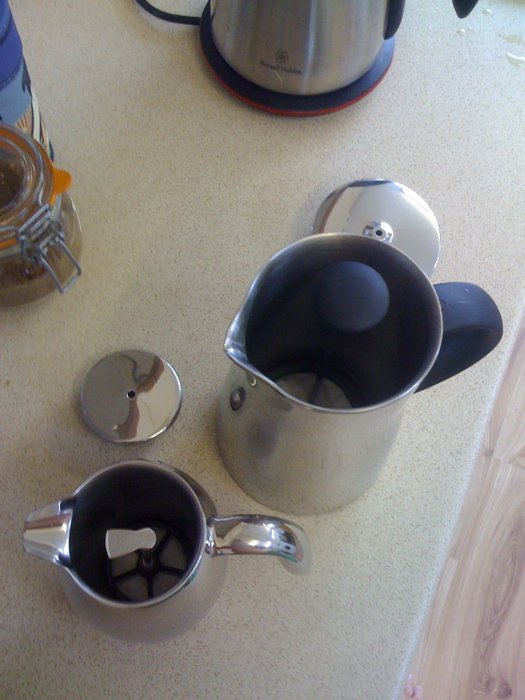 I follow Dave's method exactly but put the plunger all the way in at the start - this also allows easy pouring from the kettle (but putting the lid back on after adding water to keep heat in). I then take the lid off before pouring it out.

*I have found that the pour spout is an unecessary 'filter' and I believe results have improved without that plastic mesh getting in the way.*

Am I crazy or does this actually work?!!

Thanks again Dave! (saw it posted on twitter)
Top

Dave nice idea I will give it a try tomorrow and see how it works.

One thing though, isn't the bitterness caused by too much fines? I always thought so and that what made me switch to a Mahlokonig Guatemala. Now I get better brew and less bitterness which is a huge change compared to the FPs I used to get from my Macap.

One experiment I might recommend is sifting the grounds and then FPing it. It usually shows how fines spoil the brew.

It could be fines causing the over extracted bitter. I only get it when I press the pot so it could be squeezing the bad stuff from the fines. The lifting method does not squeeze the coffee, it just collects it as you raise the screen. I would equate the press to squeezing a tea bag, which pulls out the bad stuff. The pressure from the press is forcing out the compounds you dont want. I have even gone with boulder sized grind with a one min steep which should be sour and under extracted but I would simply get a sour/bitter cup. The skimming helped a lot but it could be better yet so I tried reversing the process. Think of it as a drip/press hybrid of sorts. Lifting the screen creates less pressure.

You could always prepare your pot as usual but only press the screen down enough to break the top of the crust and pour through the screen but I think you will still get a slightly bitter brew since the grinds are still steeping. Reversing the process removes 98% or so of the grinds and halts the steeping in addition to avoiding the squeeze out the bitters effect of the press.
Dave Stephens
Top

Friend of mine gave me a pound of his home-roasted Panamanian with the proviso that it's best in a press pot. Thanks for the timely post!

A morning without coffee is sleep. -- Anon.
Top

cannonfodder wrote:. . . Cimbali Max and press pot. The one problem I have had with a press is that the coffee always has a bitter twang ala over extracted. I have changed grind, steep, temperature and it has been reduced but it is still there.

Espresso requires a blend of fines and coarses, if you will, and a proper espresso grinder like the Cimbali Max produces that fine-coarse distribution rather well across a wide range of settings.

That's a marvelously creative use of a french press!

Another option might be a relatively inexpensive grinder like the Baratza Virtuoso (ca $200), which in my experience does quite well for brewed coffee (and poorly for espresso).
Richard J. Wyble
Top

Precisely why my Super Jolly (which I adore for espresso) sucks at press.
Tim Eggers
http://www.facebook.com/TimEggers
LMWDP #202
Top
← Back •
By accessing this site, you agree to the site's terms of service.