Just want to share some experiments we have been doing lately. Me and a couple of other coffee nerds here in Denmark.

First fines was said to attribute bitterness to the coffee. If you brew a very fine grind it will taste bitter and have other bad over-extracted tastes. So you should think that removing fines in a grind would result in a better taste. But it's not that simple.

Matt Perger won the 2012 Brewers Cup by removing the fines by sifting. Later he found that great-tasting-grind from the EK43 has a lot of fines and then declared "fines are our friends".

It has long puzzled me how small particles in the coffee grind could work so different for taste. I hold a Master degree in Food Science and wonder about things like this. I had a suspicion that the reason had to do with how the fines were "situated" in the grind.

The coffee particles are not all free floating among each other (like often portrayed in graphic illustrations of a grind). The fines are sticky. That's due to the physical forces called adhesion. It is not only in case of static electricity. It is like when flour stick on your clothes.

The fines can either stick to larger particles - or to other fines, see photos below. My conclusion is that each result in a different taste.

When fines are attached to bigger particles they act as part of the large particle in the extraction and do not over-extract ... as when they are separate where fines only stick to other fines.

This is now easier to explore because of the Kruve sifter.

Photo 1: This is normal grind, "untouched" 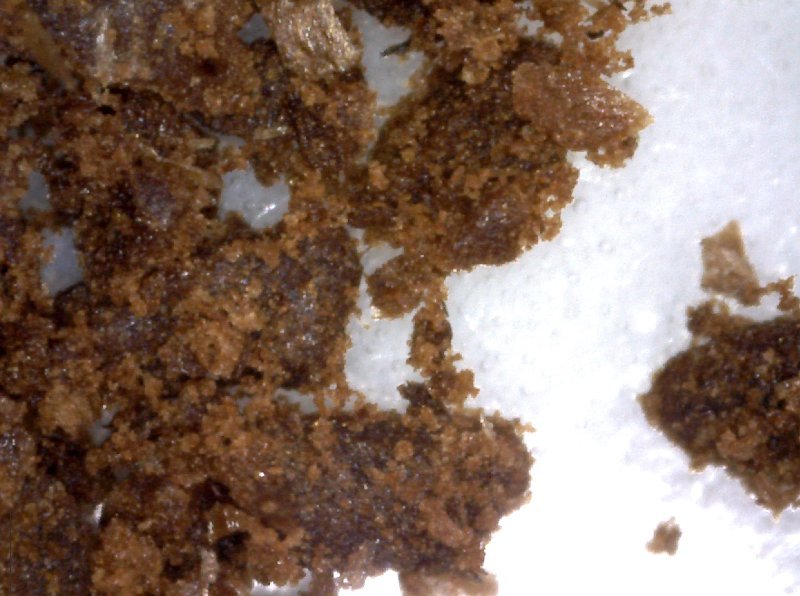 Here clearly the small particles are attached to the larger particles. You can't just blow them off. On the other hand they are not strongly bonded. They more stick like flour on your clothes.

Photo 2: Then I sifted the same grind with a Kruve sifter. Here is the fraction below 400 microns: 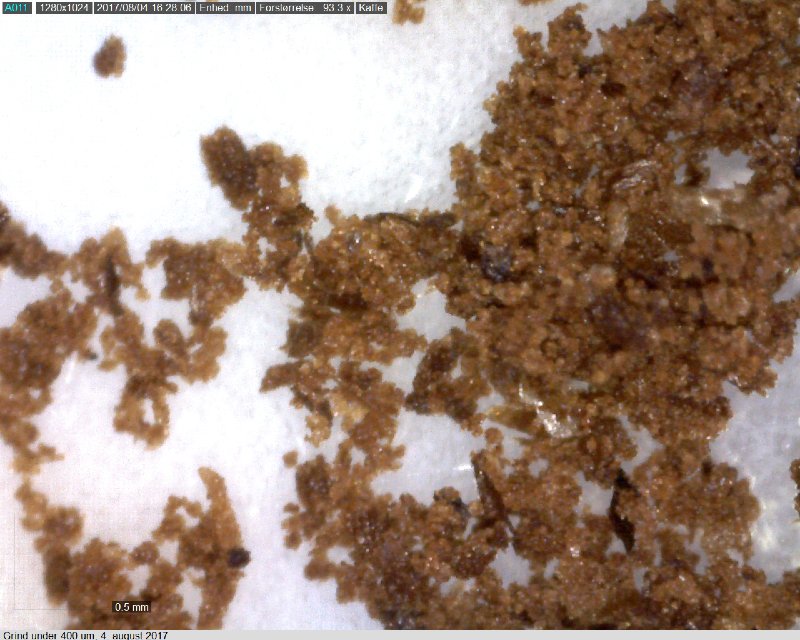 The fines stick together even though the grind has gone through two sieves (here first through the 1100 μm and then the 400 μm). They were probably separated during the shaking, but hooked up again.


Photo 3: particles bigger than 400 um from the Kurve sifter Most fines have been removed from the surface of the particles. But still a few stick.

When you shake the grind with one of the smaller sifters (like here 400 μm) you can go on for a several minutes and keep getting more small particles out. That is because of the adhesion forces: it takes some work to loosen the fines from the bigger particles.

Before I get to how these different grinds taste then first these questions:

Will the fines not just get flushed off the larger particles when water is added in the brewing process - so it will not matter how they were situated in the dry grind ? Here follows 3 taste experiments that says it's not the case.

And; do fines ever appear separate in daily life ? dont they always stick to bigger particles ?


This investigation started off by a discovery by both Andreas and me. Independently we found that grind from a bulk grinder tasted better after removing visible fines. Less bitterness. This was for filter brewing (Kalita and V60).

How we removed visible fines:
1) At the end of grinding don't shake/knock the grinder to loosen the fines from the outlet to get all of it for your brew. Instead remove the container with the grind and then cleanse the grinder by shake/knock/brushing so it's clean and ready for the next batch.
2) In the container you grind into - remove the fines that stick to the edges with a spoon. And also if there is a fines layer on top: 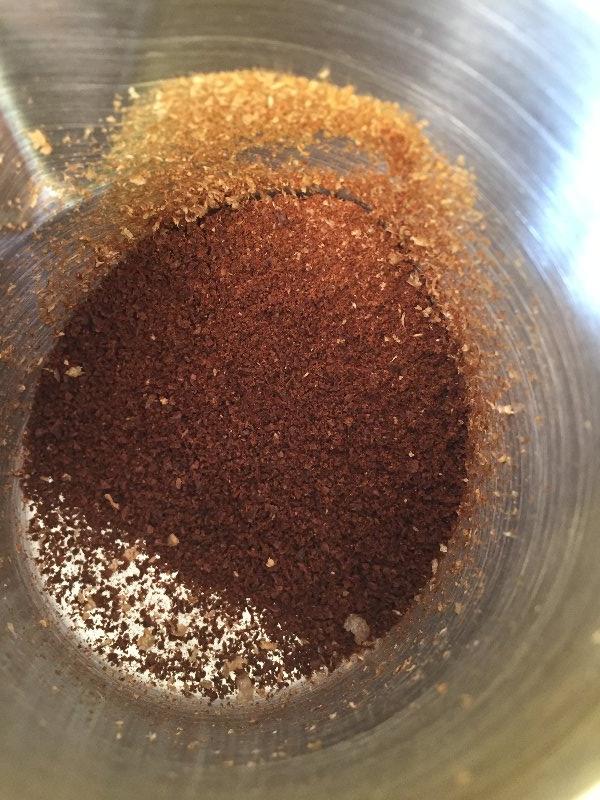 We have not seen these separate fines on slower home grinders like Vario. But suspect that the bulk grinders with big burrs and high speed throughput kind of throws the fines out of the mix.

This is Taste experiment 1 that shows the effect of the separate fines on the taste. When you remove them the brew taste better.

I have made a taste comparison of four types of grinds. It is the same grind as the microscope photo above. A medium-dark Kenya brewed as cupping. Tasted when cooled to around 55°C.

Cup 1, untouched grind as on photo 1:
The best tasting of the four cups. Good body, pleasant acidity not too much, and the aroma characteristic of the coffee.

Cup 4, sifted grind, "fines", fraction smaller than 400 μm, as on photo 2:
Bitter and other over-extracted tastes (not pleasant).

Conclusion
Fines do not act on their own in the brewing process. It does make a difference whether they are attached to the larger particles - or are separate, only attached to other fines.


Experiment 3: Drip/filter brew with separated fines
Comparing normal grind with fines attached to larger particles versus the fines separated out by sifting.

First brew: Untouched grind at a grind size that gives a good extraction on drip/filter, like V60 or Kalita.

Second brew: A grind at same grind size, just sifted first to get the fines separated. Both fractions the fines and the rest of the grind are placed in the filter. Not stirred because you want to keep the fines separate. And the little fines fraction first so it will not get mixed into to larger particles but the water. Brewed the same way as first brew.

Taste
The brew with separate fines tasted sharp and had bitterness. Compared with the "untouched" grind it had more acidity, less body and less aroma.

Conclusion
Since the ratio of fines is the same in the two brews - this can only be explained by a difference in how the fines are situated; only attached to other fines - or attached to bigger particles.


PS: I haven't found a common agree particle size for fines. Examples: Randy Pope from Bunn talked about below 600 μm at the 2013 Nordic Barista Cup. Matt Perger talks about a 100 μm limit is a post from 2016, but started off using a 250 um limit.
My coffeeblog www.coffeenavigated.net
Top


Navigate wrote: Conclusion
Since the ratio of fines is the same in the two brews - this can only be explained by a difference in how the fines are situated; only attached to other fines - or attached to bigger particles.

I imagine one possible explanation being that the fines clump, create coffee-air bubbles, and therefore change the water flow.

To what extent do the fines that are stuck to bigger particles stay while brewing?

I'm also wondering if the effect is still with the cupping method.
Top

I defiantly belive that the findings done by navigated, can help us develop a better understanding of how fines play a role in the cup results.

Fines are neither our frinds nor our enemy, instead fines play a vital role in achieving the correct extraction but at the same time free fines are able of negatively effecting the tasting results. This is somthing I realised at the same time navigated did her reseach into the effect of fines.

If you haven't guessed it allready I'm Mikkel
Top

Just yesterday I was watching a science program that talked about the very clumping process you describe. An astronaut was doing experiments with the behavior of different granules in water in weightlessness. They clumped. Apparently this was a new discovery and filled an important gap in our understanding of planetary formation.
Top

Navigate wrote:I tried to mix the 3 fractions: One spoonful of the fines fraction, four spoonful of the middle fraction and one of the boulders fraction. It didn't taste like the normal/untouched grind...

...Conclusion
Fines do not act on their own in the brewing process.

Do you think that the sifting might be affecting the coffee in some other way as well? Perhaps increasing oxidation? Did the untouched grind at least sit around prior to brewing as long as it took to sift and then recombine the three fractions?
Top

Thanks for posting this, it's very interesting. I find when grinding with my Lido 2 that you'll often find a lot of fines that stick to the bottom of the grinder. These separated fines are probably best not used and just knocked off the grinder after removing the catch cup. I'm not sure that it's the speed of the grinder that results in the separated fines but maybe it's the the metal in the bulk grinder chute and the metal in the bottom of the Lido 2 that caused the fines to stick to the grinder.
-Chris

Great work. I think you are on the right track.

Doublehelix and I discussed this sort of structure and we ended up calling it a fractal distribution - smaller particles connected to larger particles - etc.

It was theorized that this adhesion of small to large also explains why a slow preinfusion allows finer grind. Lower water debit allows the smaller particles to stay and not be swept to seal the puck. And why WDT is so effective when done right.
Scraping away (slowly) at the tyranny of biases and dogma.
Top

The stickiness and distribution of fines in grinder research has been called agglomeration; for this reason I think the stirring/whisking process works well for brewing. I've found straight WDT to not be as useful as whisking then shaking side-to-side to level.
Top
← Back •
By accessing this site, you agree to the site's terms of service.