Solubles Yield as a function of Grind and Dwell Time

I've been very interested in the Clover coffee machine ever since I saw one demonstrated at Gimme Coffee in Ithaca. Shortly thereafter I posted an explanation of the machine on portafilter.net.

When I posted a link to this explanation on alt.coffee, several group members were extremely skeptical that coffee could be properly brewed in the Clover's abbreviated time cycle. Specifically, could one extract a good-tasting, SCAA-recommended 18-22% of the coffee solids when limited to a 30-45 sec dwell time? Some folks speculated that Clover coffee would taste weak and insipid. The only possible explanation we could come up with was that the Clover's filtration system (4.875" dia filter, 70 micron screen, ~0.4 bar vacuum) might support a much finer grind than drip, press or vac pot, and this might facilitate a quick extraction.

As a matter of fact, I've always wondered about this point. And when I heard that many Clover baristas were updosing the dry coffee (using a brew ratio of 8-12% instead of the recommended 5.5-6.5%), I assumed they were compensating for underextraction by overdosing.

Well, that was over two years ago, and Clovers are still so rare and so expensive that I don't have one on my kitchen counter to experiment with <insert sobbing sounds here>. But I finally decided to get off my ass (slightly) and run an extraction experiment with the "Poor Man's Clover," an Aerobee Aeropress. Using the inverted technique that I first learned from Scott Marquardt on Coffeegeek.com, the Aeropress does a very good job imitating a Clover brew.

Sometimes the hardest step in doing an experiment is deciding WHAT IT IS that you're going to test. I often get stuck at this point. There are usually dozens of combinations of parameters, but one never has time to do them all. The teeny weeny graph below is the result of today's experiment. Between running the dinky experiment and writing it up, this is almost 6 hours of work! 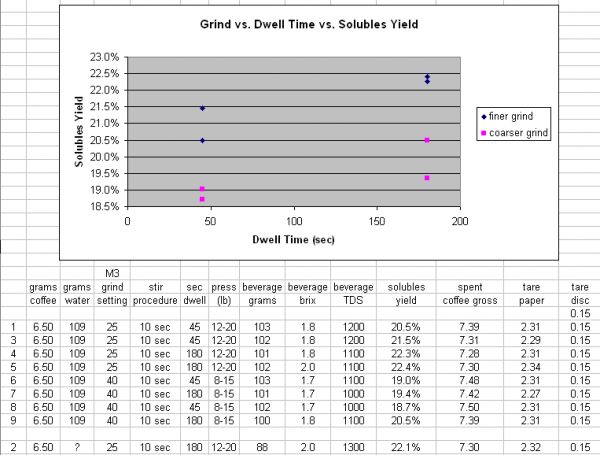 I left the data in, but the graphical part is the important thing. It shows a series of Aeropress extractions using two different grind settings on my Versalab M3 (fine and very fine) and two different dwell times (45 sec and 180 sec). The dry coffee dose (6.5 g) and water used (109 g @ 200F) were kept as constant as possible. This is close to the "ideal" SCAA 6% brew ratio. The 6.5 g dose was selected because it was the same coffee mass per sq. cm. of Aeropress filter area as a typical 32 g dose would be in a Clover.

Each press was stirred gently for 10 sec at the beginning, left alone, then pressed at the end of the appropriate dwell time. Each cup of coffee was given a quick taste. The pucks were carefully oven-dried and weighed to determine solubles yield (what percent of the puck was washed away into the beverage).

In terms of the numbers, I had no trouble extracting recommended soluble yields in 45 seconds. In terms of taste, they all offered good body and pleasing Yrgacheffe aromas. In general the 180 sec extractions tasted "overextracted": harsh, acrid flavor notes in varying degrees. Next time I will try slightly coarser grind settings.

This test is just one tiny data point, but after doing this I have no trouble believing that paired with a high quality grinder, Clover brewers can perform adequate extractions with 40-45 sec dwell times. I also believe that given the excellent control offered by the Clover, motivated baristas will tweak the extraction parameters and find "sweet spots" offering excellent tasting coffee. It may be that a 45 sec extraction can never be tweaked to taste exactly like a 3-4 min extraction, but that doesn't mean it can't taste great.

I also believe that people who try this with grinders that are less than top-grade may be disappointed. In other words, like everywhere else in coffee, the grinder is key.
-AndyS
VST refractometer/filter basket beta tester, no financial interest in the company
Top

Nice information. It never ceases to amaze me; sometimes the seemingly simple test/measurements take the longest time. I have never heard about the inverted Aeropress, could you elaborate?

I had my first Clover experience at Grumpy café and I found it very good, one of the best cups I have enjoyed actually. It reminded me of a French press but with slightly less body and brighter, not to mention void of sediment. Having had very limited exposure to the clover, I can say that the baristas I met had a cheat sheet for each coffee with a specific dose/grind setting and brew temperature. I think that would qualify as barista tweaked.

You could always take your TDS meter down to the café and see if they would humor you and provide you with the needed numbers and check the TDS on a cup from the Clover.

At $10K+ each, I don't know why everyone does not have one in the kitchen, right beside their GS3.

Great work, Andy, as always! Unfortunately, I am too dumb to ask an intelligent question about this, so I'll just leave it at that.

cannonfodder wrote:I have never heard about the inverted Aeropress, could you elaborate?

Rasqual (Scott) seems to have pioneered this method, perhaps the best description is here. Basically, the paper filter gets replaced with a polyester (or metal) filter, to avoid absorbing coffee oils. Inverting the AeroPress allows you to extract the bloom oils without losing them in the puck. But it's messy.


cannonfodder wrote:I had my first Clover experience at Grumpy café...

Same here. Panama Honey Bean, very tasty, although not the magical experience I had with their espresso.


cannonfodder wrote:You could always take your TDS meter down to the café and see if they would humor you and provide you with the needed numbers and check the TDS on a cup from the Clover.

That always struck me as an easier way to measure extraction (TDS vs. weighing pucks). Perhaps I'm missing something (happens frequently enough

Andy, thanks for running these tests. Nice work, as usual.
John
Top

AndyS wrote:, but after doing this I have no trouble believing that paired with a high quality grinder, Clover brewers can perform adequate extractions with 40-45 sec dwell times.

With your results obviously demonstrating that the desired soluables yield can be achieved via Clover'ish brew parameters, I wonder why the accepted and seemingly necessary high dosing practices by the current Clover users. It may be more appropriate for me to ask this question on Coffeed.clover, but have you witnessed the use of the Clover with "normal" dosing parameters that achieved acceptable results?

I ask because I wonder if we are getting more into the which soluables that are preferable in the cup rather than just the how much of a certain standard. Are the the higher dosing practices we have become accustomed to, whether by Clover, espresso, vac pot, etc., the result of our preference for the contents of coffee which are more readily soluable? Are we trying to get more of them when the brew/extraction process allows us some control to do so?

I have been thinking about this since I have been dosing rather high along with a pretty coarse grind when using my Chemex. If this is where our current trends are taking us, it seems that our previously accepted "standards" may become obsolete.

I am out of the country right now, so I apologize if I don't reply immediately after you inform me that everything I have stated is completely idiotic.
Top

1. It is MUCH easier for brewed coffee, if one has the right TDS meter! I don't, mine lacks the required sensitivity by a factor of 10.

2. Given the proper sensitivity, a TDS meter still measures solubles yield indirectly, whereas the tedious puck-drying method is a direct measurement. I don't understand the various factors behind converting TDS measurements into solubles yield, but I would like to, particularly for espresso.
-AndyS
VST refractometer/filter basket beta tester, no financial interest in the company
Top

I have a Eutech instruments/Oakton instruments TDSTester11 which has a resolution of 10ppm or 0.10ppt with a range of 2000 ppm and 10.00ppt with a +- or 1% of scale. Unfortunately the scale you need is ppm which leaves you with 10.0ppm resolution. Don't know if that is any better than what you have but you are welcome to use it if you want.

AndyS wrote:I don't understand the various factors behind converting TDS measurements into solubles yield, but I would like to, particularly for espresso.

The maths for brewed coffee would go something like this:

So for the following brew

After the brewing if we assume 20% extraction:

Here are some badly drawn lines on the chart to back it up. 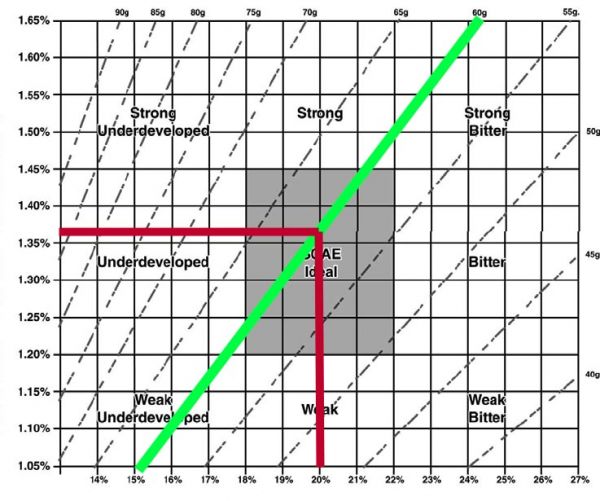 The maths is pretty basic, and the 2ml/g retained seems to have been well documented since the CBC.

With espresso I guess the maths is similar - not sure about water retained by the coffee off the top of my head though.
http://www.jimseven.com
Top

With the Scace device, you pull 3 ounces of water to simulate a 2 ounce shot assuming that the coffee cake will retain one ounce of liquid. I have not done any kind of test to verify but if Greg says it is so, I am inclined to believe him.
Dave Stephens
Top

But is that a 14g puck or a 24g one?
http://www.jimseven.com
Top
← Back •
By accessing this site, you agree to the site's terms of service. If you need help with the site, please contact us.