The secrets of the moka pot - How to video

I'd like to invite you to discuss the moka pot. I'm experimenting with it some months ago.

This is our new youtube video about this brewing method and about my measurements.
Would be happy to read your thoughts, comments, critics, questions. Of course it would be great to read them below the youtube video but here as well. Don't hold anything back!

Very well done! It's great to see a technical review of the lowly moka pot.

A question: Do you think the relative internal dimensions of the Brikka are comparable to those of standard moka pots like the Moka Express?

I have also probed my own moka pot (an old stainless 3-4 cup model). Here's one example (using cold water) where it is very apparent when the water first hits the temperature probe that's in the center of the grounds: 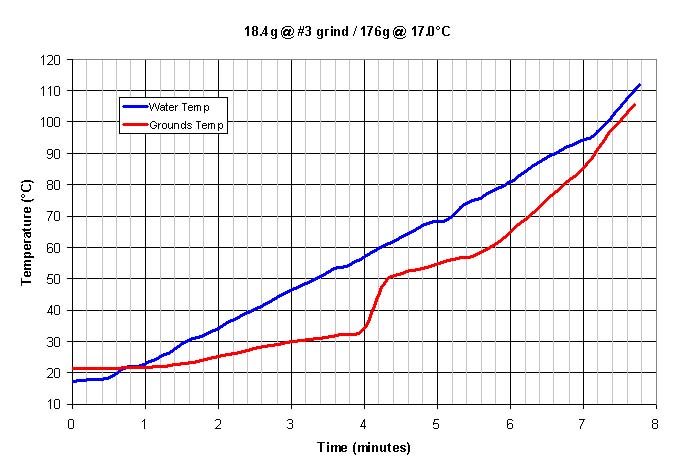 Here is another one from a paper by Navarini et al (2008), showing pressure, flow and bottom tank water temperature. They used a 3 cup Bialetti Moka Express: 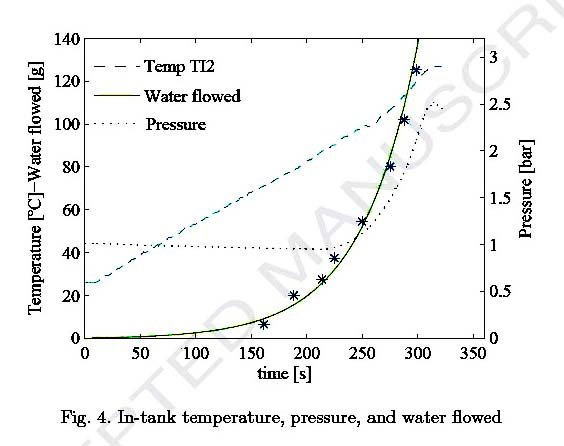 Great measurements! I thought I was the first one who got a sensor in the basket

. O.k. At least the first video about this this really interesting topic.

I think the moka express has the same dimensions as the brikka. There is a 2 cups and a 4 cups version. The 2 cups version is the ideal size I think for this brewing method.

I think it's a simple but great brewing method with predictible temperatures.

Nice experiment! For the longest time I have wondered about the temperature in Moka pot and how to control it delibrately.

I supposed the temp sensor are correctly calibrated right? The maximum temperature you get in the coffee cake seems to be at 124 Celsius for Brikka and 118 Celsius for Moka(preheated). Water doesn't exceed 100C unless the pressure is higher than 1atm**. Which means, indirectly, your experiment indicates that the pressure in Brikka goes up to 2.3 bar and 1.9 bar for the Moka... very enlightening...

And it's a surprise that the coffee doesn't taste burnt when brewed at that high temperature (even if the brew period is short)..

samuellaw178 wrote:The maximum temperature you get in the coffee cake seems to be at 124 Celsius for Brikka and 118 Celsius for Moka(preheated). Water doesn't exceed 100C unless the pressure is higher than 1atm**. Which means, indirectly, your experiment indicates that the pressure in Brikka goes up to 2.3 bar and 1.9 bar for the Moka... very enlightening...

It doesn't work quite that way because there is also air inside the moka pot. The pressure is the sum of the water vapor and air partial pressures. In the espresso world this goes by the name "false pressure". During the brew cycle the water vapor pressure keeps rising and the air pressure drops, but never to zero. This is the reason H. Barista said in his video that initial water volume has an impact on water temperature.

The other thing is that the steam tables assume liquid-vapor equilibrium. In the moka pot the temperature in the head space is significantly lower than in the water. I measured differences of 10-15°C between water and vapor; Navarini shows similar values. It turns out that the vapor temperature is a better indicator of the pressure when using the steam tables. This by itself would lower the pressure estimate by at least 0.6 bar. But taking into account the air pushes it back up part of the way. Navarini measured about 1.5 bar gauge pressure in his experiments.

It's a very interesting system from a thermodynamic point of view.

EDIT:
When the pot sputters (Navarini called this the strombolian phase) the water, vapor and grounds temperatures converge. So at the end the water temperature actually is a good indicator of vapor pressure. Here is Navarini's plot of measured pressure with calculated air and vapor pressures superimposed. The green line is liquid flowed. 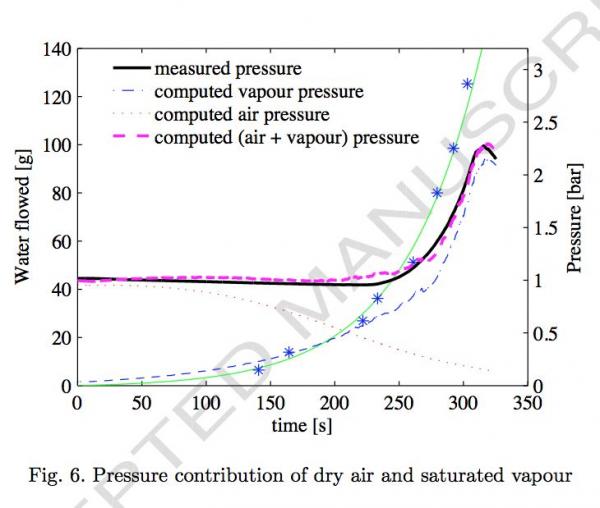 Thanks John! Great explanation. It's a good idea to measure the vapor. Later. I need some peace now

James Hoffmann posted your video on his blog

Great video, and love the nod to BTTF!

As a fellow Brikka(2 cup) owner, I appreciate your analysis of its inner workings and effort to demystify its brewing. It's no small feat getting a shout-out from James Hoffmann. And while I'll never give up drinking espresso -- my magic elixir of choice -- time and time again I pull out my trusty Brikka for a magical brew. It makes a great cup, and has a loyal following, as evidenced by this long and storied CG thread:
http://coffeegeek.com/forums/coffee/machines/220503
☕CCG☕
https://canuckcoffeeguy.wordpress.com/
Top

Sorry Chris! As I saw the last post from Ryan I opened instantly the blog. Thank you for the hint. Kind words from James.

Gábor
www.naked-portafilter.com
Top
← Back •
By accessing this site, you agree to the site's terms of service. If you need help with the site, please contact us.