I came across Dave Stephens' post about his French Pull technique. It is an older post, but a good read. I couldn't find a video demonstrating it, so I made the one below. I found the cup a notable improvement over a regular French Press. Any one else try this or use this technique on a regular basis? Any tricks you have found along the way?

Cool video, thanks for posting it.

I like the idea of inserting the filter ring again. Takes care of the grinds that fall back in.

I remember the first time I saw that method, it was at the Ugly Mug (if memory serves me right) in Ann Arbor, MI and the Barista was playing around with some of the guys from CG. I tried it once at home, but didn't try again for the exact reason you put the press in the sink!!!!!!

I'm going to try again though this weekend.

I tried the same thing not knowing that the "method" is already "documented".

But I did it differently. I removed the metal filter and instead inserted a Melitta paper filter. But after a few times of doing this I gave it up. My idea was to soak (brew) it for 2 minutes or so, and then lift and let it filter through. I tried for the whole process to finish in about 4 minutes. I just lost patience after a few times. LOL. Maybe someone wants to pick up where I left and report.

I had not idea that a french press would be able to seal around the edges like that. Does this model have a rubber gasket around the edge, or just the typical wire mesh?

Check out page 5 of this thread Another Kickstarter - Impress Coffee Brewer where I convince yakster to try pulling on the empress. This brewing method seems a bit more adapted to pulling (although I don't think the creators considered it) because the grinds end up in a different chamber. If someone made a french press with 2cm lips around and above the outside of the plunger/wall interface, it would be ideal.

This is sort of a reverse aeropress. How easy is it with a paper/cloth filter?
LMWDP #353
Top

Done with playing with the method for a while - too much other stuff to do. Bottom line: it works.

The grounds create an extremely effective cake filter. The resulting grounds are very low in residual moisture, and it seals very well because the grounds push the edges of the filter out - BUT you must pull as straight as possible. Pull it off axis and you're back to a normal French Press. The coffee is force-filtered through the grounds because there is no air above the grounds cake - just coffee - all the way until it breaches the top.

Some pictures:
Pictures 1 and 2 show the paper filter installed below the screen:

below the screen
but 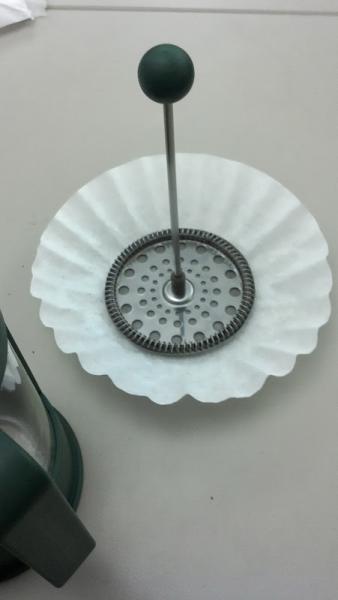 above the lower screen retainer 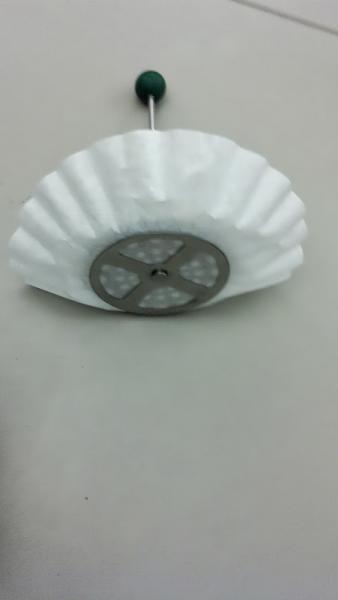 Filter installed
and pressed to bottom of press 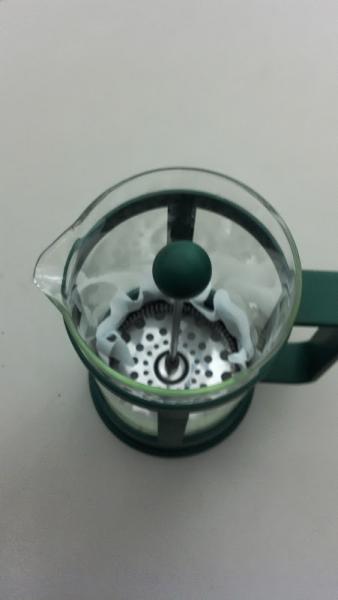 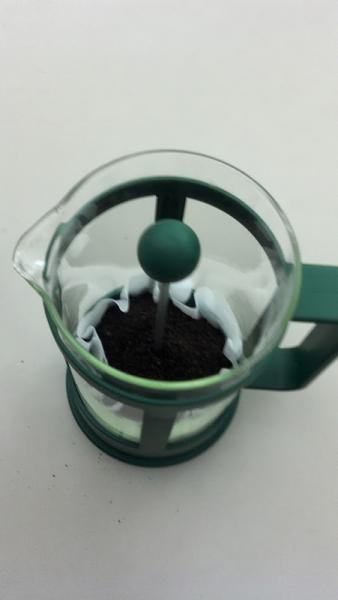 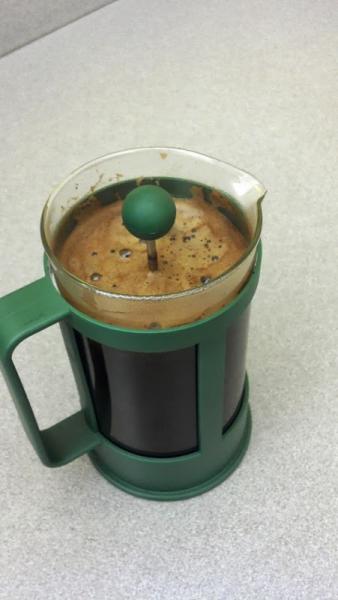 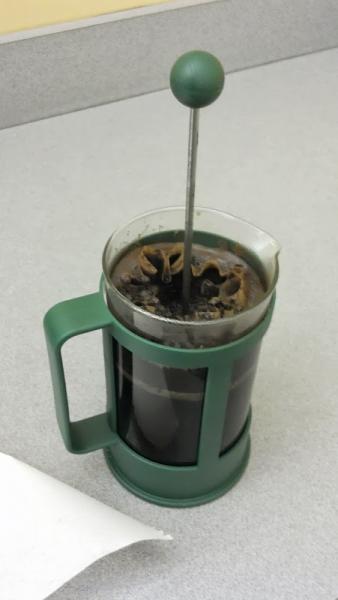 Grounds breach the surface of the coffee 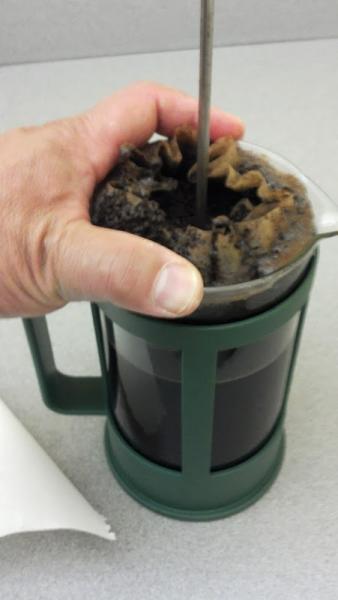 Filter and Finished pull pot (careful! note the rim of coarse grounds - don't let them fall into the coffee you just made) 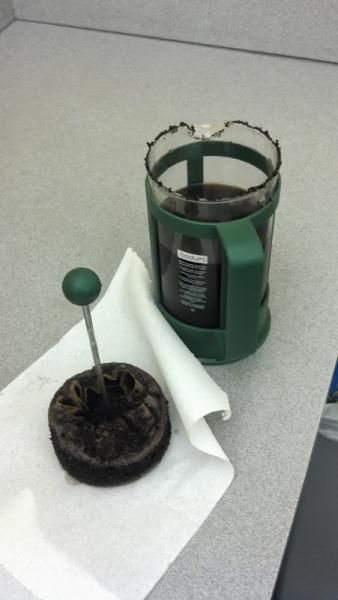 Filter after disassembly and cleanup. Note the captured fines between the screen and the paper filter. 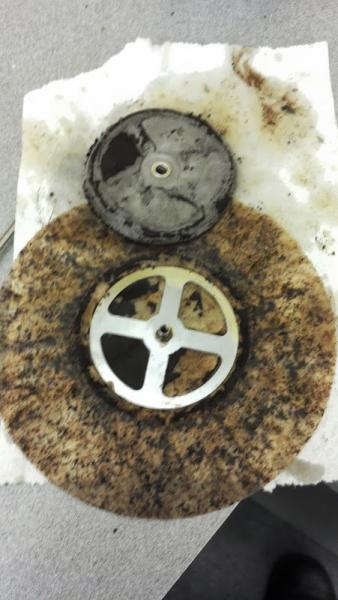 I still do it except for at work. It is more difficult to do in my new location. The paper filter is interesting but I would think it would pull out most of the oils you get left behind with a press pot. If you have a thing against a toothy cup then that would certainly get you a clarified filter cup in a press pot arrangement.
Dave Stephens
Top

As soon as paper is involved, this just seems like a messier version of a Clever dripper. Now, I really like that approach to brewing, but why not use the right tool for the right job?
LMWDP #435
Top

cannonfodder wrote:I still do it except for at work. It is more difficult to do in my new location. The paper filter is interesting but I would think it would pull out most of the oils you get left behind with a press pot. If you have a thing against a toothy cup then that would certainly get you a clarified filter cup in a press pot arrangement.

The paper filter has essentially no effect on oils. Once you pull the coffee through the grounds, the oil amount drops dramatically. One misconception is that the paper filter is the reason some methods have more oils than others. It's the filter absorbing the oils, and when the "filter" is a cake bed of grounds, a large part of the oils are retained. The exception to this is if you continually rinse the grounds with hot coffee (as in a percolator). The methods that traditionally don't use paper filters happen to be the type that will rinse/emulisify the oils through continual circulation (percolator) or top-down methods that don't filter the coffee through a bed of grounds.

I get essentially no difference in the resulting oils (by eye and by mouthfeel, taste, and perception) whether I use a paper filter or not. The HUGE difference is if I use the press pot traditionally (where any filtering is just with a fine mesh screen). If I filter the press pot top-down with a paper filter traditionally, I still get tons of oil. If I filter it through a bed of grounds, the oils drop. The differences are enough to see.


[creative nickname] wrote:As soon as paper is involved, this just seems like a messier version of a Clever dripper. Now, I really like that approach to brewing, but why not use the right tool for the right job?

This was just to work out differences in filtering, and how to get a decent clarified french press. The other thing I was trying to get around is my particular press pot has a slightly short filter rod, and doesn't reach to the bottom of a full 16:1 brew. The pull variation leaves the maximum amount of coffee in the carafe, and the paper filter is just there to contain the grounds and help retain the grounds to create the cake filter as soon as possible during the extraction step.

The other thing the paper filter enables is almost any grind (though finer grinds will obviously overextract) but also de-sensitizes the press pot to excessive fines if you get the average grind size right.

The CCD can be sensitive to percolation stalling during the draindown if there are too many fines, and then there are few options for "forcing" the percolation.

In general, though, you're right the CCD is much cleaner and easier way to brew a cup.

(Oh, and the Press Pot can brew up to two very large mugs in one steep session, whereas the CCD can only brew one at a time)
Top

An interesting parallel here that immediately comes to mind is the steampunk. This is actually quite similar to the way the pistons work in the top chamber. Granted, when you're removing the piston, the liquid has already descended to the bottom chamber, but the process is very similar. I would imagine this would give you better clarity.

-Dave-
Caffeine is proof that God loves us.
Top

Did adding the paper add paper taste? I imagine it being in the water for 4+ minutes would add a lot of paper taste.
Top
← Back •
By accessing this site, you agree to the site's terms of service. If you need help with the site, please contact us.