Intrepid510 wrote:Well I am here in the bay area Berkeley with a preciso, I know Sunnyvale is far but just saying.


Maybe if someone can arrange another meet up this year, I may be able to go depending on the date lol.
LMWDP #355
Top

Received it a couple of days ago and it was very tough to put it on the burr carrier but I managed to place it as flush as possible but I'm thinking about sending it to Baratza to get it completely flush. However, I tried to grind with it and I can confirm that it produces less fines than the ceramic. I never liked Aeropress before since it came out too bitter, but after this morning's cup, I'm quite impressed by its potential!
LMWDP #355
Top

shadowfax wrote:Yes, definitely. I have one of the very first Vario's made, so it's got the original and rather troublesome adjustment slider that you have to physically push and re-tighten, rather than the new ones, which as I understand it have something like that for major ajustments and then a second apparatus for fine adjustments to calibration.

In my case, I configured it so that the burrs touch (chirp a bit) when the right/macro slider is all the way up and the left/mirco slider is 2 notches from the top. With this arrangement, I find that Chemexes are about 2 macro notches and 50% or so of the micro notches down from touching. French press is one or two macro notches below the 'filter' label for me. It does appear so far that the adjustment range is shrunk, and the grind size that you get all the way out after calibrating for touching at the finest setting is ridiculously coarse. The dust level at that grind is impressive, though.

My original Vario had the "new" fine calibration screw. That feature was so new when I got the grinder that no one had posted how to calibrate with it. So I dutifully pulled off the rubber cover and calibrated using the much more difficult adjustment slider (with instructions I found on HB.) Near the end of that process, I noticed the little hole for the new adjustment screw and wondered what it was for. I did a little searching and found instructions for using it.

I've since replaced that grinder with a Vario-W, and I got a set of the Ditting burrs at the same time. I had no trouble installing the burrs -- the fit in the upper burr carrier was perfect. But the noise from the empty grinder with those burrs is so different that I thought the burrs were touching (they weren't.) I couldn't tame the sound with the fine adjustment screw, so I used the old adjustment slider. Somewhere along the way, I found a spot where the burrs really touched and realized that I probably could have used the fine adjustment screw.

Anyway, I followed the standard Baratza calibration instructions, which tell you to put both sliders all the way down, then position the right slider all the way up (finest setting) and the left slider in the middle. Then you adjust the screw so that the grinder just begins to sound like it's laboring. What I found is that the metal burrs actually chirp instead. I think the "laboring" sound is what you have to listen for with the ceramic burrs because they don't make a distinctive enough sound when they start to touch. With the metal burrs, the sound is quite distinct.

Calibrating in this fashion, I found that the setting for vac pot was only about one notch finer on the right slider than it had been on my old Vario with ceramic burrs. To be fair, that setting hasn't been updated for the specific coffee we're using at the moment, so for all I know the grind setting is exactly the same as it was with the ceramic burrs. That's what I found with the Technivorm drip brewer: I got the best drip extraction when the right slider was in exactly the same position as it was with the old Vario and ceramic burrs. Again, I'm not using the same coffee with which I determined the setting on the old Vario. It's similar, but not the same. Nevertheless, I think the settings are going to work out to be pretty close to what they were.

The standard calibration I did with the ceramic burrs worked for espresso, but wasn't quite coarse enough for press. Luckily, I don't like press, so it has never been an issue. My guess is that your range has compressed because you did the calibration with the left slider set a lot higher than Baratza's current recommendation. Though that slider is for fine adjustment, and you wouldn't expect a few notches to make a big difference, my experience has been that they actually do. I would bet that if you calibrate with the left slider a little closer to the middle, you'll expand the range. I'll probably re-do my calibration with the left slider about 1/4 of the way down from the finest setting, or thereabouts, to make sure I have enough headroom to do press in case guests prefer coffee made that way.

My impression of the burrs? Well, I haven't had a lot of time with them yet, but add me to the list of the very impressed. The uniformity of the grind is exceptional. I can't say I've ever seen coarse grinds look this good. I still have the old Vario (though not for long), so I ground a little coffee at the drip setting and compared it with grounds from the new burrs. The visual difference is like night and day.

As far as taste in the cup, I ran out of really good coffee before I got the metal burrs fully dialed in. I was able to grab some Ethiopian Harrar roasted about 12 days ago from one of our local cafes, and it brewed up fairly well. It's not of the same quality as what I get from Terroir, but it was reasonable for completing the dial-in process. I thought the cup was fairly good, which I've never been able to say about coffee roasted by this particular cafe. As soon as I get my regular brew coffee shipment from Terroir next week I'll be able to give a more complete report.

FWIW, I used my VST refractometer to dial in the new burrs and confirm that the grind settings for the ceramic and metal burrs are about the same when the Vario is calibrated the same way. The refractometer really shines for things like that.
Top

Can you post a photo of the grounds - maybe even a comparison photo of the ceramic vs. metal burrs? Not many people have two Vario grinders handy.

Well, the old Vario was all cleaned, packed and ready to go, but...

Your wish is my command 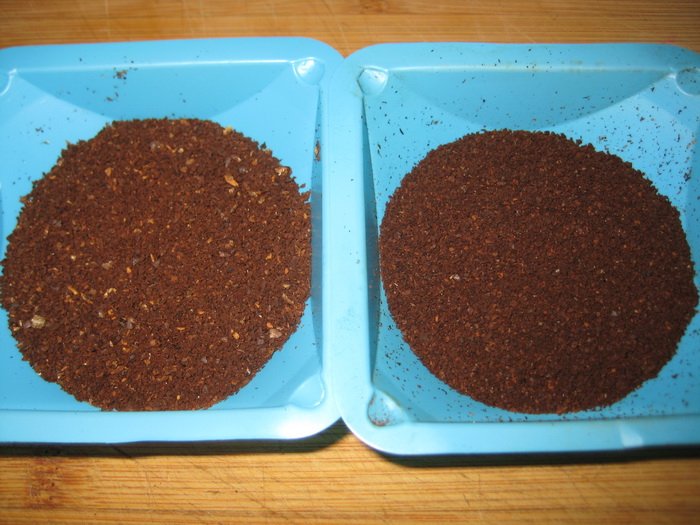 Here's a close-up of the grounds from the ceramic burrs: 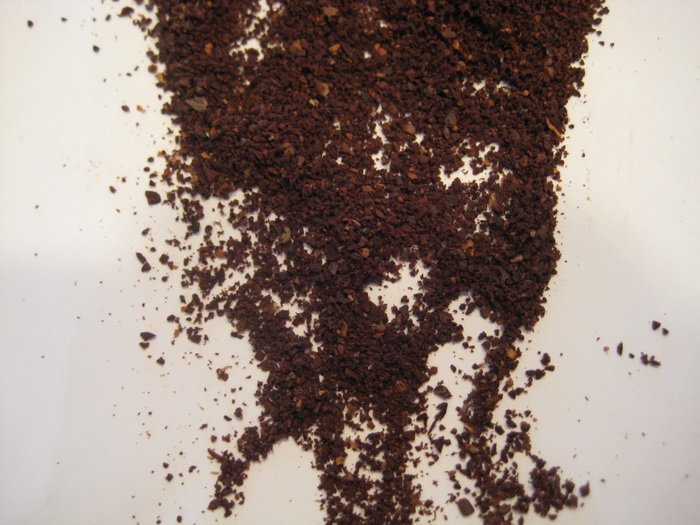 And here's a closeup of the grounds from the metal burrs (sorry it's a little blurry): 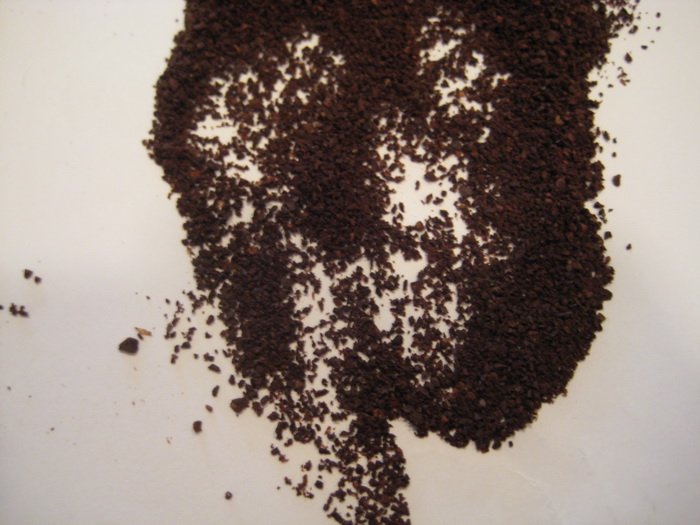 - I didn't precisely dial in the grinders to get exactly the same pour from my brew device. The new Vario-W with metal burrs was already dialed in for the Technivorm. The old Vario with ceramic burrs was also dialed in for the Technivorm, but I hadn't checked the setting in months and never with the particular coffee we're currently grinding. The grounds produced by the old Vario were noticably coarser than the grounds produced by the Vario-W, so I tightened the grind by one notch on the macro slider. This produced a grind that's about the same, though perhaps a little bit coarser than the Vario-W. Nonetheless, I think you can see that there's a significant difference in uniformity.

- The Vario-W's hopper was about half full of beans, while I single-dosed the old Vario. I put in enough beans to get over the finger guard, but that's a lot less than what the Vario-W had. I imagine there was some popcorning in the old Vario that may partly explain the difference in appearance of the grinds.

- I don't know why the grinds from the ceramic burrs have so much more chaff. Does anyone have a theory on that?

- The photos are a bit misleading on color. To the naked eye, the grounds produced by the ceramic burrs aren't as light as they appear in the photo. I suspect flash reflection off the chaff makes the grounds appear lighter in the photo.

Neither sample had much dust. I think the reduction in dust with the metal burrs that Nicholas reported would be evident at somewhat finer grind settings. I have to go two macro notches finer for vac pot, and suspect the dust would start showing up with the ceramic burrs at that setting.
Top

Looks like the chaff makes it though the ceramic burrs unaffected, while it gets pulverized in the metal burrs. The meta burrs have a steeper (more radial cut) outer edge, but a smaller bean catching area on the inner edge. However, I have no idea how that shape change makes for this result
Jim Schulman
Top

In contrast to the previous comments, I notice a fair amount of chaff and static coming from the metal burrs while single-dosing, and I wonder if a full hopper would alleviate some of this.
Ryan
Top

portamento wrote:In contrast to the previous comments, I notice a fair amount of chaff and static coming from the metal burrs while single-dosing, and I wonder if a full hopper would alleviate some of this.

I think that's likely. When I used my Vario for espresso, the consistency was much better with a full or partly full hopper versus single-dosing. I ended up not single-dosing as a result. I don't recall, however, whether that made a difference in the amount of chaff.

My old Vario is packed and in the box now, to be picked up this afternoon. So the next person to make the switch will have to continue the experiments. We need to see four samples:

True enough, but he asked for photos...
Top
← Back •
By accessing this site, you agree to the site's terms of service. If you need help with the site, please contact us.