Behind the scenes of the site's projects and equipment reviews.
← Back to Blog • 207 posts •

The idea of approaching this grinder with a hammer and punch seems rash. After shelling out over a grand for the grinder (that should have had markings in the first place), involving a good machinist wouldn't be extravagant. Below is a photo from Lino's article "The Mind and Machines of Verna Design": 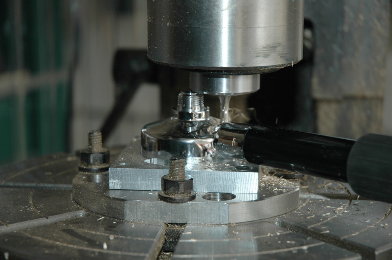 The La Spaziale S1 portafilter and its jig on the rotary table.

HB wrote:The idea of approaching this grinder with a hammer and punch seems rash. After shelling out over a grand for the grinder (that should have had markings in the first place), involving a good machinist wouldn't be extravagant. Below is a photo from Lino's article "The Mind and Machines of Verna Design"

What do you think? Would you like to give it a try

Abe, if you're interested, we can discuss options and possibilities... Shoot me an email.

Abe Carmeli wrote:Nice shot Jim. Did you invert the image using "Negative" for the X-Ray images?

No a combo of filters - equalize, contrast, find lines, threshold (black & white only by luminance level) false coloring by luminance level, then all overlaid. There's a ton of cheap pattern enhancement, pattern recognition, and other photo faking filters out there from eastern European ex-spook sources.

Seems Lenin got it the wrong way around, they're selling us the rope to hang ourselves

I have just finished a three hour interview with John Bicht, the Designer of all things Versalab. It was very interesting and as soon as I can get my act together, I will post excerpts from it on a separate thread.

Grinding is faster, there's no bean hurling, and stray grinds from the burrs fall to the base if you do thing things in the following order:

The running grinder sucks the beans down below the brass disk on the axle almost instantly, so the beans don't get the chance to fly back out.
Top

This is just a short note on maintenance. Weekly, remove the drive belt and clean it and the pulleys with alcohol - isopropyl would be best. It is a very simple procedure and takes 3 minutes including cleaning. Yesterday I noticed the effect of foregoing the cleaning. Dust is collected on the pulleys, and the belt starts slipping instead of moving the large pulley, though the engine is running. The grinder will stop grinding and you will hear a squeaking sound. One sweep around the pulleys and the belt cleaned it up for me.
Abe Carmeli
Top

A note on my taste testing. Bottom line, the final results will be delayed by two weeks. Here's the skinny:

The interim results are based on blind cuppings of some very good coffees; so these results hold up in my mind. But the shot tests have problems. They were based on non-blind naked PF extractions of a bunch of so-so coffees I had lying around from some tastings. The non-blind part could bias the results, the so-so part means there was a really low upper limit on how good the results could be.

I tried doing blind tests on my current houseblend. This also isn't working out. The sweetspot for the Mini is a 96C ristretto, for the M3, a 94C regular pull. These two "best practice" shots are different but I can't really prefer one to the other. The blend is from three coffees selected out of dozens I've tasted to work specifically with the mini and tea. In other words, the thing is designed to produce a great shot with that setup. So what conclusion can you draw from the M3 shots being different but not clearly better? Basically, the only conclusion is that the M3 is a good grinder and that I know my stuff. That's not news

So here's the new tack. I've ordered three of the best SO coffees I've cupped this year. The Harar makes a great shot; the Lintong makes an iffy shot, with some distortion from the cup taste; and the Yrg makes a very poor shot, with the greatness from the cup distorted beyond recognition. I'm going to compare the grinders in the cup, in Tea shots, and La Peppina shots.

This is a test with no upper limit. If the M3 is capable of undreamt of greatness, i.e. grinding godshots from the Yrg, it will show up. If it gets a lot closer to this than any conventional grinder, that too will show up.

The testing won't be blind, it won't be statistically significant, but it will answer the question we're really asking: Will this thing produce an espresso undreamt of till now?
Top

After spending a week with the grinder, sometimes into the wee hours of the morning, it was time to talk to the person who invented that little bunny. I called up John Bicht of Versalab, and we had a 3 hour chat on anything from race cars to product design to the M3 series. Since the scope of the interview was larger than the grinder I published it in its entirety in Knockbox.
Abe Carmeli
Top

For those who haven't seen what's inside the DRM grinder, I posted some pics. I was surprised to see how much metal the frame has connected from the motor to the burrs. It seems the belt design must have been for speed, and not so much for heat. As opposed to the Versalab, this belt is toothed. The grinds appear very fluffy, and no dusting.

Try this link:
http://homepage.mac.com/jepy/PhotoAlbum57.html
Top
← Back • 207 posts •
Sponsored by Urnex