What are "must have" accessories for new espresso machine

I have traveled extensively in Europe over the last 15 years on business and have grown hooked on two things that are fairly commonplace over there but not so common over here (at least where I live) - good espresso and good gelato. Some years ago I bought a Krupps steamer to make espresso at home - an uneducated attempt a satisfying one of my two cravings that turned out to be a waste of time and money. I guess the saving grace was the Krupps only cost around $30 so I didn't waste much. I don't get overseas nowadays like I used to and with the dollar shrinking against the Euro, I decided to get myself educated on the arts and science of espresso and take the plunge before it gets any more expensive than it already is.

After reading most everything I could find on this website and on CG and reading countless machine reviews, I decided to go with a Vetrano (HX, plumbed in, quiet pump, good reviews, reliable vendor) and a Mazzer Mini (works good and built like a tank - I like tanks). Since I don't get to put my hands on them until Christmas, in the mean time I am prepping for the machines. I'm getting my water tested to determine what, if anything, I need to do to treat it. I'm waiting until next week to order some fresh coffee so it will be good at Christmas and I purchased a bottomless PF to see how even my tamping/distribution/etc. is as I start out and progress.

Since you're starting out, a 0.1g accuracy scale will do wonders to enhance your consistency.
Don't dose more than 15g until you have it wired... say 10 years from now.

A good tamper is essential. If you make cappuccinos, get a milk pitcher for frothing. Some nice cups will enhance the aesthetics. A blind filter is probably included with the Vetrano, but if not, get one for backflushing (and some Cafiza or similar backflush detergent).

One of the Pallo brushes makes cleaning easier, along with some backflush detergent of your choice and some Grindz (not necessary but makes cleaning the grinder easier). I personally find a rubber backflush disk more useful than a blind filter but it's a matter of taste. I have a nice piece of 5/8" wood that lets me set the portafilter holder (bottomless) flat on the counter when tamping. You'll wind up with a bunch of baskets. What you mostly need is a bunch of coffee of a type that will remain fairly consistent for a while, and some time. Enjoy! As we used to say in alt.coffee, "here's your handbasket."

A substantial knockbox comes in really handy. I like the big Bumper one. I also like the Bumper tamper stand when using a spouted portafilter - and it has that cute tamper holder, too. These and the above suggestions are great stocking stuffers to accompany your new arrivals.

Oh! And don't forget a good stack of cleaning cloths!

Sue
Life's too short to live in Dallas!

A thermometer for the milk pitcher is a good idea until you get "the feeling".

Thanks for all the suggestions folks. Maybe I can get my wife to look at these things as stocking stuffers.

Would probably be an easier sell if she liked coffee

I wouldn't call this a "must have", but it's handy. REI sells a cheap mini whisk and dust pan, which works great for sweeping up coffee grounds: 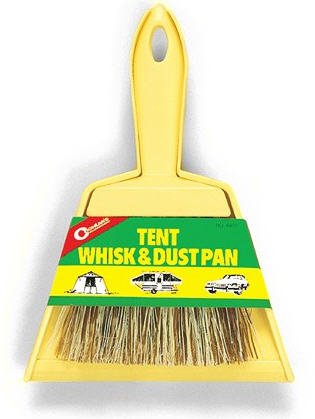 Don't forget a handy dandy brush to clean out your grinder with. Grindz is good for periodic cleaning, but for everyday cleaning, I find a small, cheap, stiff bristled brush essential.
Top

I think these were all mentioned, but my list (excerpted from the Alexia Buyer's Guide):


If this is your first espresso machine purchase, I recommend the following accessories: Optionally, I also recommend: These optional items are helpful and useful tools that will get you on the road to pulling great espresso sooner rather than later.

Most people get a thermometer for steaming as well (and I have one), but if you use your hand to stop stretching when the side of the pitcher feels warm, and your ears to stop swirling when the sound becomes a lower growl, you'll probably have good milk. The Pallo Coffeetool also makes an appearance in my kitchen, but not so often that it is a must have. If you wiggle rinse with a blind and water backflush often, things should stay clean.
Jeff Sawdy
Top
← Back •
By accessing this site, you agree to the site's terms of service. If you need help with the site, please contact us.