Recommendations for buyers and upgraders from the site's members.
← Back to Advice

I'm looking for a quality timer for my La Pavoni.

In the morning, I have a short window of time where I would like to return home and make a quick espresso before heading back out. Even though the timing is specific and somewhat consistent, the window of opportunity is not large enough to wait for the 8-10 minute warm-up. Therefore, I would like the timer to allow the LaPavoni to turn on before I arrive, with a safety net of turning off 20 minutes later if for some reason I cannot return home.

° Accurate / precise (needs to be specific when can be turned on and off; mom's old "out of town" timers aren't precise enough)
° Reliable
° Durable (can withstand the daily usage as well as current draw of the La Pavoni). 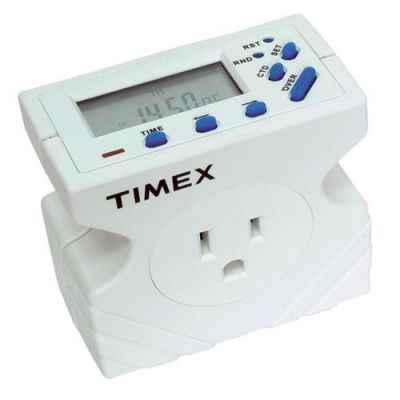 Timexes work very well. It has 4 programs and allows you set different times for weekends. I have two machines on these.

Lowe's and in your end Ace (or whatever orange logo chain, been a while since i left the coast) may carry it. For anything else there is ebay

Never get between a man and his ristretto, ever!
Top

I recommend the Intermatic DT17C:

I used to program it for weekday and weekend hours, though now I do it manually. Be careful with espresso machines that cannot auto-fill; the heating element can burn out if the boiler runs dry.
Dan Kehn
Top

Dan, comments on Amazon scared me away from this one before. Out of curiousity, how long have you had yours? Any issues or reservations?
Jeff Sawdy
Top

Yikes, quite a few reported problems on Amazon (two excerpted below). I've had mine for a few years without problems. It's plugged into a surge protector, if that matters. The unit does get a little warm as M. Williams reported. I bought it at Home Depot.


Albert Wiersch wrote:This was wonderful while it worked, then stops working after a few months, even when you put in fresh batteries. At least mine did. And I've had other very unreliable Intermatic products like a wall timer switch which was amazingly unreliable. I was hoping this would be different. It was indeed better than the wall timer switch, but it still breaks after a few months of use (stops being able to turn things on and off- problem with the relay switch inside?).

M. Williams wrote:I bought one of these and it lasted about a year so I took it apart and found that it had a bad solder connection so I fixed it and lasted one more year then would no longer switch on devices, so I took apart again, found that a diode went bad, very poorly designed power supply there is a resistor that gets overly hot. Now I've power it with a transformer and so far so good. Please note this is the only digital timer with 14 on off settings and that has battery back up, that I could find.

HB wrote: Be careful with espresso machines that cannot auto-fill; the heating element can burn out if the boiler runs dry.

I agree with an auto refill if you use a programmed timer. I messed up the element on the Urania and will not repeat that experience.
Mitchell
LMWDP #77
Top

I bought one of the Intermatic DT27C Heavy Duty timers last Monday at Home Depot. It's rated for 15 amps and seems to work well, although I was rather disappointed that it was not set up for the new DST dates and did not change times yesterday morning. I wound up turning off the automatic DST setting so that it didn't change in a few weeks. For $20.00, it's hard to beat.
Mike Fitzpatrick
St. Louis, MO
Top
← Back
By accessing this site, you agree to the site's terms of service. If you need help with the site, please contact us.