You had me wondered for a second, "what soggy puck?". Then I realize I'm using a lever machine, so I get these nice little thick Oreos (don't be jealous!

But they're still worth using if only for they can be used with the same grind setting as a double! 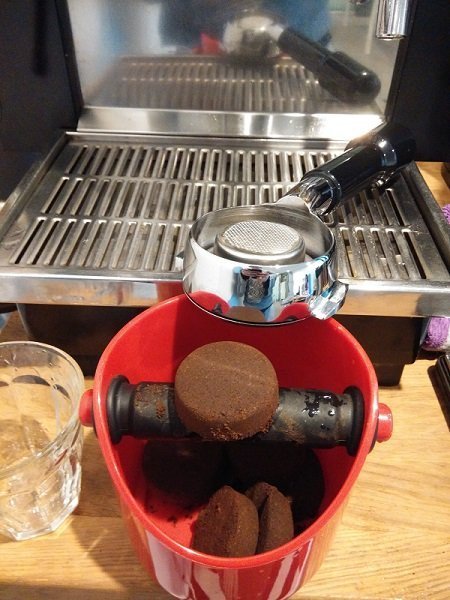 If only! I think I would have to let one sit in the basket overnight to get that nice and dry.

I am using the same basket, the LM single, and my tamper is 40.9mm (1.610")... it started out life as a 58mm that I reduced in size.
The problem with the LM singles basket is that it is tapered. I wish they had made it really straight walled without any taper, so that one tamper can do it from top to bottom and you can adjust any amount of grounds to work. As it is, you start to fill it really well at around 8g, about where the 41mm tamper works well. If you go more, the grounds level goes higher, and the walls flair out slightly more as you go higher, so you actually have that same 41mm tamper swimming in there with lots of space to the walls. I've settled on around 8.5g, which is a bit much, as I have to do at least 5 or 6 tamps, all of them very light with just fingertip pressure, north south east west and a couple more for good measure, never palming the tamp, only light fingertip pressure to seal the puck against the walls. If I don't do this, I get water jetting down the walls and going through the puck.
It also changes with the machine. I've noticed the Strega has a very strong SUCK of air it inhales as you pull the lever down; so I actually have to pull the lever down most of the way without the pf in place; just before I get a hiss of water, I insert the pf loosely; then just as I'm turning in to tighten, I pull the lever the rest of the way. Even doing it this way, I still get an occasional fractured puck, broken in the center by the incoming rush of air due to the very light tamp... the puck is VERY fragile. This doesn't seem to happen with the Londinium, perhaps it draws in less air on the downstroke of the lever. It also never happens when I tamp hard, the pucks get much stronger when I tamp at 30lbs and never fracture. But going lighter on the tamp and grinding finer has given a better flavor.
Top
← Back •
By accessing this site, you agree to the site's terms of service. If you need help with the site, please contact us.