Dalla Corte Mina in the USA vs Rocket R9 One vs Other?

I really love the DC Mina. It's a little bit more than I was hoping to spend on my next machine, but I wanted something that was auto volumetric and also allowed manual or automatic, repeatable, flow profiling to experiment with.

This appears to be the only machine to do all of those things, without compromises yet practical for home use, at its price or less. Correct me if I'm wrong. (Yes the Lelit Bianca and GS3 MP and Decent DE1+ all do some but not all of those things. The only alternative seems to be the Rocket R9 One but which only profiles pressure and also appears slapdash in the engineering/design department according to some folks who work with distributors I've spoken to.)

Anyway: I have been saving for this machine for 2 years and was so excited to buy one from Clive Coffee. Last week I decided to purchase and imagine my chagrin when the only place to buy in the USA was Whole Latte Love.

I've ordered with them in the past, don't get me wrong, but I'm a little wary of the support given I live in California and they're in upstate New York.

Alpha Dominche became the US Dalla Corte distributer in September 2017. Alpha Dominche abruptly closed December 2018; leaving customers, investors and maybe even Dalla Corte out to dry. I was hopeful the see WLL was going to start selling the Dalla Corte Mina this past spring, a very interesting machine. There hasn't been much info posted on WLL (videos, reviews) since they started selling. The Dalla Corte website isn't showing any US distributers. I feel your support concerns are valid...though it is a very cool machine! Good luck, keep us posted.
Top

Thanks for clarifying. I wasn't aware Alpha Dominche was the DC distributor previously. I am reassured that WLL won't close suddenly, at least. They seem far too large an outfit to close their doors. Todd Salzman explained to me that they are working on getting technicians and repair centers set up throughout the USA as they sell not only the Mina but the whole commercial line as well (e.g. XT); he did acknowledge it would take at least a year to have this network in place.

I'm certainly glad there is *some* way to get the machine in the USA. I also feel WLL was pretty honest about the reliability of this machine (i.e. that it is much simpler in its layout and parts aside from the patented DFR) vs other machines I was looking at which they sell at a MUCH higher margin (e.g. Rocket R9 One which sells for 4300 euros in Europe). They could have directed me to a less expensive machine that they would have made much more money on, but didn't.

I hope their belief in the product translates to sales, and that the product does well under their distribution. Clive still has more DC Mina info on their site than WLL does, which makes me concerned. Then again, maybe they are just focused on the DC commercial line -- and the commercial stuff may be selling just fine without a video or two from Marc Buckman.
Cheers,
Bill
Top

The Rocket is not in the same league. Water flow is much too high to do stuff like Slayer shots. The Mina is a single group professional machine in a very small package. The Rocket is a pimped consumer machine.
Top

Thanks, I had wondered about that actually! Whole Latte Love offered to measure the actual flow rate from the Rocket R9 One from the group head at 0.1 bar so I could get a sense of how precisely the preinfusion process could be tailored. They offered to fire up a Rocket R9 One for me, measure it, and send the data to me.

But then the highly knowledgeable WLL employee I talked to (who has personally tried out all the machines they sell from different manufacturers prior to agreeing to distribute them on their site) made it pretty clear that whatever the answer, there was not much comparison between the two machines past the feature set on paper. The Mina is by far a machine offering more precision in the real world. He also pointed out that the inside of a Rocket R9 One looks very scary and very...precarious (see video below). Think: wire jungle meets solenoids and plastic tubes everywhere. And given the incentives on their website to purchase Rocket, I think it's pretty clear they make a lot more profit from selling one Rocket R9 One than one Dalla Corte

So I took that to heart. For what it's worth I saw some independent chatter about the R9 One's insides on a german forum but can't remember the thread with the pictures...

And this is the inside of the Mina: 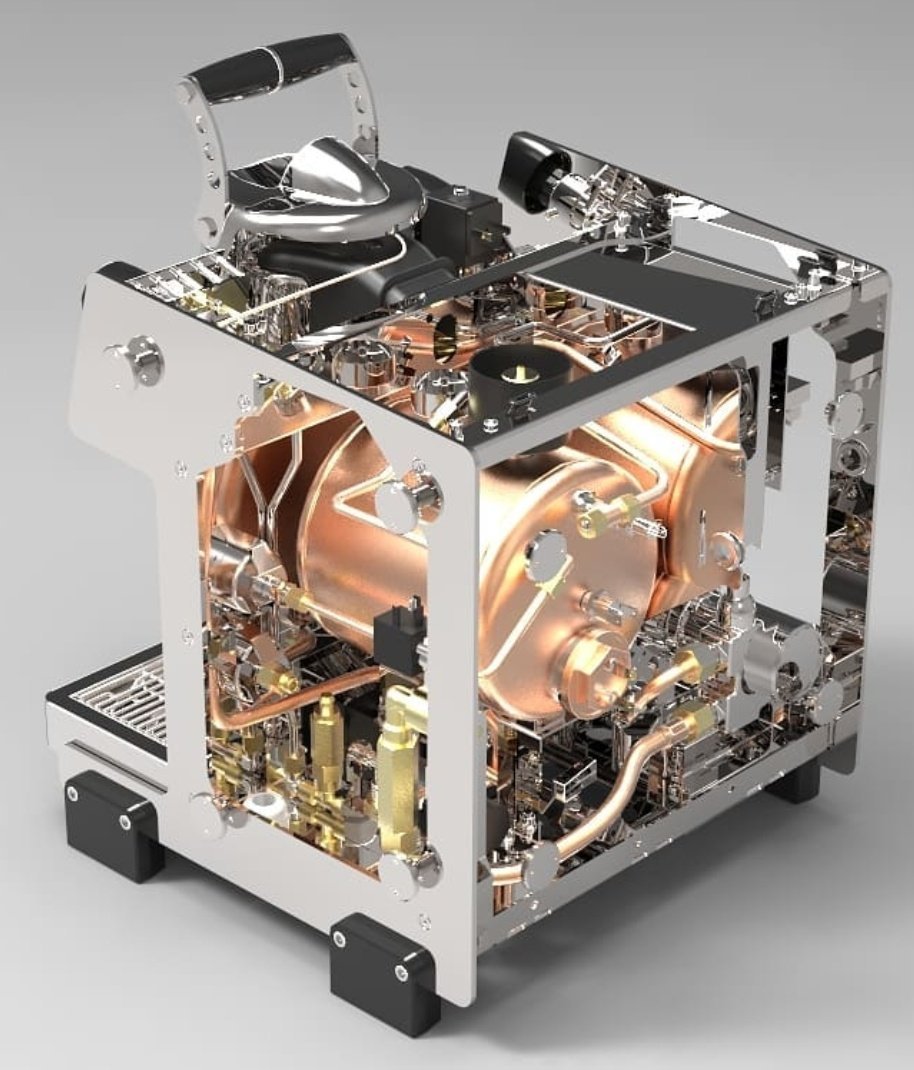 With a separate cool section for the electronics on the left of the machine.
Top

This is really impressive, I think even better looking than a KvdW

I was wondering about that, as it looked too perfect to be real!
Top

But the render is still a presentation of what is really in there. It won't be that shiny.
Top
← Back •
By accessing this site, you agree to the site's terms of service. If you need help with the site, please contact us.